Atlanta’s Suntrust Park – My review of a modern baseball stadium

I recently jumped at the chance to see a baseball game at Atlanta’s brand-new Suntrust Park.

Why not? I figured.

My ticket was free. My favorite team on the planet – the Chicago Cubs – was in town. It had all the makings of a solid night’s entertainment. 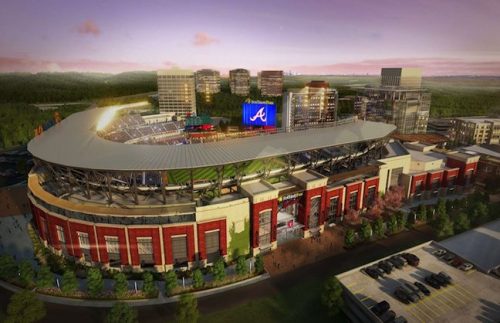 First, a disclaimer: I’m a baseball junkie. Having grown up in Chicago, I attended dozens of games every year at historic Wrigley Field. I was there for the heartbreak in ’84. I suffered through the gut-wrenching loss of the Steve Bartman game in 2003. And I rode high in the clouds when my team won it all in 2016.

I check the standings and watch highlights every day. I go to games as often as I can (even minor league games.) I listen to my team (and many others) on the radio, old-school style. I’ve played semi-pro ball. I like scoring games with a pencil and notepad.

Every summer, it takes a legitimately big chunk out of my writing career.

I’ve lived in Atlanta for about twenty-three years now. Am I a Braves fan? Nah, not really. But I definitely enjoy watching them all the same. My earliest experiences at Fulton County Stadium are memories I won’t forget. And all the playoff games I caught at Turner Field – classic stuff. So when the Braves announced they were moving across town into an epic, brand-new stadium, my curiosity was piqued. I didn’t like that it was so much farther away from home. But for a baseball fan, a new field is something to be savored. I knew I’d check it out eventually.

Tickets were sold out. The weather, although slightly muggy, was perfect. Our group of ten filed into our separate Uber cars and made our way to the park. Hint: you should definitely take Uber if you can; the parking situation isn’t good.

Clean pedestrian lanes guide foot traffic toward a host of restaurants, shops, and townhomes. The pathways are wide, accommodating forty-thousand plus people with relative ease. Everything is as expected – Braves’ gear for sale, friendly staff, quick service, and mega-expensive food & liquor.

I partook of a few whiskey sours and settled in for a pre-game dinner at the Terrapin Taproom, just one of many taverns surrounding the stadium. It was loud, as in loud-loud. Cubs fans had turned out by the thousand, and they were thirsty. Despite the crowds, the Terrapin’s staff was up to the challenge. They dished out our food in no time at all. And while admittedly the pulled pork and jalapeno fries were fairly standard (maybe even worse) I’ll be the first to admit no one should come to a baseball game expecting grade-A food. I didn’t, and so I can’t fault the Terrapin.

We made our way to the field… 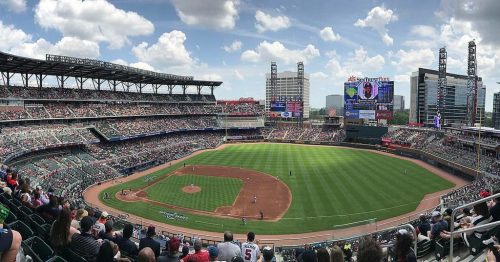 Anytime one visits a new stadium, the tendency is to compare it to the old one. In this case, the comparison is SunTrust Park versus the much-beloved Turner Field. As I plunked down in my seat down the first-base line, my initial feeling was that SunTrust’s sight lines to the field weren’t quite as good. A railing blocked part of our view to home plate, and the constant slow movement of sign-holding vendors obscured the pitcher/batter action. It wasn’t horrible, but it was enough to annoy. In thirty-plus games at Turner Field, blocked action was rarely an issue.

And as a guy who comes to the game to catch every single pitch, you just can’t have bad sight lines to the field. I’d recommend SunTrust tell their vendors not to stand in place too long or wander aimlessly. As for the seats, well…it might be that they’re just not angled quite high enough. Not really much SunTrust can do about that.

And a few mild cons:

Everything is extremely expensive

Let talk about the game experience.

It’s what’s most important, after all.

Before I comment, I’ll admit I’m old-school. I like my baseball straightforward. I don’t need gimmicks, huge graphics, bombastic noise, or fountain-eruptions after every strikeout (yes, SunTrust has a fountain beyond the center field wall.) I don’t need walk-up music, thumping bass, or multiple distractions between each half-inning. I’m there for the game, not to watch the Home Depot tool races or to listen to Cotton-Eyed Joe for the thousandth time.

And while acknowledging my old-school habits, I’ll also say I understand catering to a younger, fresher, lower-attention span crowd. That’s just the way it is. New fans demand a new approach to the game. Loud music, fan contests, side-shows…I get it. I really do.

Let’s start with the TV above center field. It’s so massive, so mega-gargantuan, one wonders if it’s the world’s largest. Players’ faces appear at 1,000 times real-life size, smiling down upon every possible statistic. It’s bright. It’s big. And it’s loud. Video boards are cool and all, but when they dwarf the game itself, fans like me notice.

And we don’t necessarily appreciate it.

While I’m aware many (if not most) modern ballparks blast music before every batter, after every play, and between every possible moment of relative quiet, SunTrust takes it to the next level. Every time Braves’ hitters smacked even the most pedestrian of  hits, Spanish hip-hop blared from every speaker at volume eleven. The game score didn’t matter. Even walks earned twenty seconds of ground-shaking music.

Example – in the ninth, an inning during which the Cubs’ pitcher hurled thirty-one pitches, the ‘Chop’ music played between every…single…pitch. I’m not even kidding.

Throw over to first

Batter steps out of the box

Ground ball out to the second baseman

After each one, music blasted. The game slowed to a crawl as the pitcher stood and waited for it to end. Some part of me wondered if it were against the game rules for a home stadium to play so many sound effects. Even the Braves fans around me wearied after a few repetitions. It was loud enough to be headache-inducing. And it’s hard to give me headaches, given my love of extreme heavy metal.

But there I was, slowly dying.

This particular game endured an hour-and-eight-minute rain-delay, which stretched the total butt-in-seat length to about four hours. And during these four hours, music or sound effects blasted between every possible moment of game action. I expect this is probably true for many stadiums, SunTrust being no exception. If ever the Atlanta fans had any inkling of generating their own noise, of building their own anticipation without pumped-in music, the stadium didn’t allow it. The sounds thundering out of the speakers were far louder than any crowd could hope to match.

Ultimately, it felt contrived. Awkward. Like an Enrique Iglesias concert. And not at all like a baseball game.

I guess…maybe in hindsight…the game might’ve passed me by. Maybe I’m old. Maybe I don’t appreciate  thunderous bass as much as I thought I did. I mean…SunTrust is a big, beautiful park with a ton of entertainment plugged in. Food, liquor, shopping – it’s all there. The stadium has almost everything anyone could want.

The only thing it’s missing?

So there it is. I’m sorry, SunTrust. You did your best. Unless the Cubs return for a playoff game against the Braves, I won’t be back.

You’re a great park with some truly cool things, but you’re not for me. And I’m sure, given the prices you charge for beer, you’ll be just fine.

For more of my Atlanta hot-spot reviews, go here.

And read a ton of my Atlanta/Chicago adventures here.