Sean Hill is an artist I’ve had the pleasure of watching grow into his skill. When I first encountered his artwork on Route 3 #1, he was clearly talented, but as he completed each subsequent issue… you could tell that his confidence in his craft was also developing. Of course, it didn’t take long for others to notice as well.

Lucky for me that he had some time, and I had a 4th issue of Gilded Age needing an artist.

Sean took some time out of his busy schedule of conquering the comic book world to answer a few of my questions.

I’ve been drawing since I was about 6 or 7 years old. My grandfather (Otis Hill) would draw sometimes for me and he would encourage me to practice it myself. He’d take me to comic stores sometimes and I would try and emulate some of the work I saw in those comics and some books my mom had at home.

As far as drawing comics though I think it’s  been about six years now ( time flies) my girlfriend at the time ( now my wife) was going to school for animation and she really encouraged me to draw comics since I would always say I used to want to.I think my first gigs were for Saint James comics ( now defunct ) and Terminus Media‘s Amber Fox vs the Terra force. I kinda miss those characters now that I think about it I still sometimes get the inkling to redesign those characters and redraw that book.

I remember when I was 7 being a huge fan of Knight Rider and the old Superman movies. I was obsessed with trying to draw them and make it as perfect as I could. I’m not really sure if I ever wanted to be anything else other than an artist. It just seemed like one of those natural callings I guess. I remember looking at that old Levi’s commercial with Rob Liefeld, it was my first look behind the scenes of how comic artists made comics. I think when I saw that though I realized what type of artist I wanted to be.

There are a lot of things that inspire me to create, movies, fashion, real life people and places, all that stuff as far as artists the list gets pretty extensive. I think of all the things that do keep me creating there are a few artists that are consistently in my head all the time.

#1 is Bernie Wrightson, I was exposed to his work as a little kid, my mom had The Stand by Stephen King, and, of course, all the illustrations in that are by Bernie.

The other is Gustave Dore from Paradise Lost, another book my mom owned and a lot of Wally Wood and Frank Frazzetta pen and ink work. Also artists like Mshindo Kuumba, Ivan Reis, Todd Mcfarlane, Eddy Barrows, Lewis LaRosa, the list goes on and on.

I honestly am really loose with the time management thing, most times I keep in mind that I have to do certain amount of pages in a week and I just try to get that done as best I can. Sometimes the deadline is really tight and I have to become more organized but more often than not I find consistency is far better than being a great time manager. If your consistently showing up at the drawing table to get work done it can be better than managing your time well enough to know you might have only two hours to draw for one month straight but you loose steam somewhere In the middle. I find if I just keep showing up at the table and just relaxing a bit about time and just focus on the work, it gets done eventually and most times on time.

The hard part is though this is not my 9 to 5. For that I’m an Inventory manager at an art store and I have a job as a husband to my wife and then from 10 to 3 or 11 to 4 in the morning I’m a decent comic book artist that’s managed to trick people into paying me to draw for them.

As far as promotion I’m admittedly an introvert, I’m quiet I don’t call for a lot of attention really, but I do rely on social media for promotion of my work though. It’s just apart of being in a creative field, you just have to show people what you’re doing in order to get work. I’m mostly on Facebook or Instagram but I sometimes use twitter and blogger as well.

My process is  really simplistic, I start most of my stuff in my sketchbook. I keep an 11 x17 moleskine sketchbook it’s really big to carry around but I tend to anyway. When I get a script or just doing cognitive storytelling for myself, I get a business card and trace out 5 pages across my moleskine page throughout the entire page. This gives me about 20 pages I can thumbnail on one sheet. I start my thumbnails out pretty tightly, I try to get as much detail as I can and try to really flesh out as much as I can. The more I do at this stage the less I have to do on the final artwork. During this stage I’m referencing as much as I can and trying to get a flow for the story. Once that’s done I use my phone to take pictures of all the thumbnails and upload them to Dropbox or e-mail them to myself or whatever. 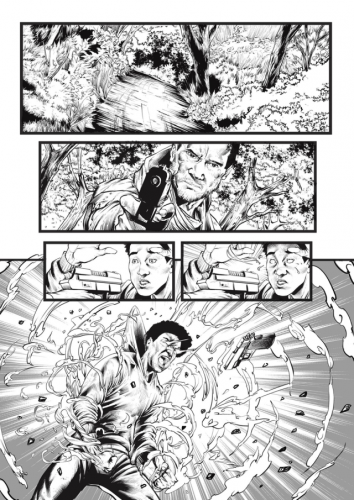 Sean Hill’s Not so Rough Route 3

After that I’m at home and in Manga Studio, I open a story folder with as many pages as I need. From there I drag and drop each thumbnail picture into every corresponding page and start on the pages.

Drawing the actual page is pretty simple as well, I used to do some pretty tight penciling and then ink my stuff but it was taking forever and as I got more comic assignments I became a little more confident in my inking, I no longer rely on such tight pencil work. As a matter of fact, because it’s digital, I don’t even bother using a pencil brush. I make a new layer over my thumbnail, and I make both layers blue. I drop the opacity on the thumbnail and start roughly sketching over it. When the roughshod are satisfying, I jump right into the inks. When I’m inking, I tend to noodle around a lot and most times it causes me to draw a lot of unnecessary lines but it’s fun, and I’m kinda like going on the fly with the inking anyway.

I finished some Route 3 a bit ago, and I have been chipping away at a personal project for a while now. I got the chance to do some covers for Zenescope Entertainment’s DeathForce series and also Hellchild : the Unholy. I also got the chance to work on Grimm Tales of Terror: the Monkeys Paw and some DeathForce covers . 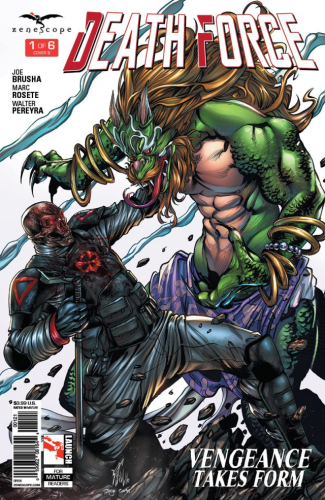 Three books come to mind that I really felt like I had an obligation to tell this story right, and I felt really connected to.

#1 Dark Shaman a four part mini series I did for Zenescope, it was about a long dead Native American Shaman who comes back from the dead to seek just for his dead tribe. He start trying to kill this group of college students vacationing in a cabin. Two of those college kids are native themselves and I really enjoyed how the main hero had to get in touch with her culture and roots to over come this Shaman. It dealt with a lot of issues some natives go through with cultural identity. It’s difficult to live in a modern world we’re the culture you should know is either at worse ignored and at best appropriated.

#2 is Route 3, and again it’s because of identity. The character of Sean Anderson is trying to find his place in the world and is conflicted with the loss of his Mom and the fact he just doesn’t fit in to “black culture” all that well things only get worse when he finds out he has destructive powers he can’t control yet. But it gives him an opportunity to make his place in the world. I can identify with that being s quite kid growing up in “the hood” and not fitting in all that well

#3 is gonna be The Gilded Age, I though the dynamic between the main characters was interesting and seeing how they dealt with their conflicts was both really entertaining and really heart breaking, but in real life many of us have been on that emotional roll a coaster

As far as adding things into stories, I think I am more often doing it nowadays then when I first started. I used to have this notion that the writers vision must be adhered to at all times, but I truth comics is a collaborative effort and everyone is gonna bring something unique to that story and that’s fine as long as it services the story.

Sean’s work can be be seen:

Part 2 of this interview is available here.