A couple of months ago I ran the pages of a short story comic I’d done back in the day. Looking over that post (you can see it right here), I had meant to also provide the original short story to provide a tiny bit of behind the scenes on what things were like before the pretty pictures. I didn’t do that apparently, so I figured I’d provide the story here (plus I’m a bit under the weather tonight, so my brain isn’t much for the writing stuff this evening). So, go read the comic and then come back and read the short: 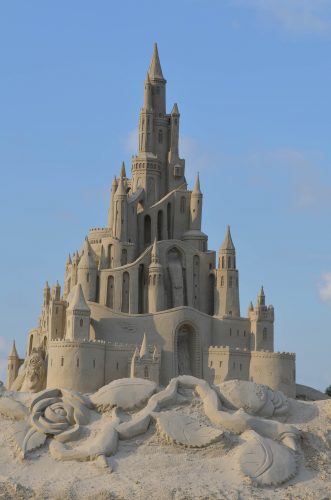 Image by Katrin B. from Pixabay

The ocean water had risen to the edge of the outermost wall now.  And moment-by-moment it would get higher and closer.

Plastic men whom once roamed these walls, scanning for the enemy ships on the horizon, now stood silent, watching the ocean’s waters draw near.  It was a dream that now turned into a nightmare

The castle itself seemed like it was prepared.  All the defenses the kingdom could muster had been put into action.  Great barrier walls of sand had been erected many times over.  Ditches were dug as a way of breaking the force of the waves.  It was pride that told them they could stop nature’s onslaught.  Pride, vanity and maybe stubbornness, Jason had known what was the best placement for the foundation.  It was folly.

The words of his father resonated in Jason’s ears.

“You should build somewhere else.  The ocean will take your castle away.  All your hard work will be lost, not to mention possibly some of your men.”

But Jason knew better.  As commander of this construction, it was his final decision.  Under the fiery sun, he and his men had toiled.

It couldn’t end like this.  Too much work had been done to this land.  Using the very sand and dirt that surrounded the castle, its walls had been erected.  In fact, nothing like it stood for miles.  Of course, it had been known that this was a possibility.  They had all heard of abandoned forts from years past even as construction was begun on this.  Talk that the ocean would swallow them up eventually.  But those warnings were ignored.  Nothing could stop this construction.  It was to be the pride of the kingdom.

The ocean’s waters had bashed down the first of three dirt and sand barriers.  Now it was only a matter of time.

Luckily for them, it had been seen that an evacuation would need to take place.  By the droves, the residents had left all their worldly belongings behind, save for the occasional shovel or bucket.  Those would be gathered up at the end.  For now, they were needed.

Orders hung in the air, “Defend the castle until the end”.  Those same words that had given them strength were just echoes in their ears now, for it was the end.

The sun was dipping below the horizon now.  Soon darkness would engulf them, only the lights from the camps behind them would illuminate the area.  And very poorly at that.

The last of the outer walls began crumbling into the sea.  No one moved to try and brace it once more.  It was a lost cause.

That was the last line of defense.  All that remained between the ocean and the castle was now little more than a memory.

The walls themselves seemed to swell with moisture.  They were seemingly prepared for what was to come next.  No amount of bailing was going to stop all four of the walls from coming down.

Jason watched all the hard work get slammed by the water.  Minutes passed, and more of his castle was removed.  Taken back into the sea again from whence it came.  He held the shovel and the bucket in his hand, trying to decide if there was anything more he could do.  As the master of the house, it was his responsibility.  And he couldn’t allow anyone to be hurt or injured in attempting to stop the inevitable.

Slowly he picked up his soldiers.  He whispered to them that they had done their best.  More than anyone could have hoped for, but that the retreat was given.  None of their lives needed to be risked for any longer.

They could only stare back in disbelief.  Jason wasn’t sure if it was the order, or if the long day had finally taken a toll on them as well.  Like statues, they stood still staring out into the growing darkness.  The spray of the ocean water wetting their faces.  But one by one Jason pulled them from their post.  It added to the growing sadness.

Soon it was only Jason and the remnants of the castle, which was now half flooded.  Pieces broke off in large chunks and crashed to the ground.  Jason couldn’t even see the outer walls anymore, those same walls that they had erected earlier that day; the same walls that were supposed to stop nature itself and minimize the damage of the ocean.  All they would need is to make it through the night, the tide would change once more, and with that was hope.  Yet with each passing moment, the sand was carried out to sea.

Jason looked back to his men.  They awaited their orders.  There was no blame for the positioning of the castle.  That had been his decision, and it was their duty to ensure that his decisions were carried out.  Still, he couldn’t help feeling that he had let them all down.

Jason felt a hand on his shoulder; slowly, he turned to see his father.

Looking up at him, Jason swallowed his pride and forced the words out, “It would seem you were right all along.”

His father only looked out into the darkness.

Jason pointed to the remnants of the castle, “I had hoped it would have stood longer.”

His father surveyed the results of the day and nodded, “There’s always tomorrow, son.  Come in now, dinner’s ready.”

His father turned back toward the house, but Jason looked one last time at his castle.  His hand reached down and picked up the shovel and pail, now full of soldiers, and turned to make his way back up the hill. 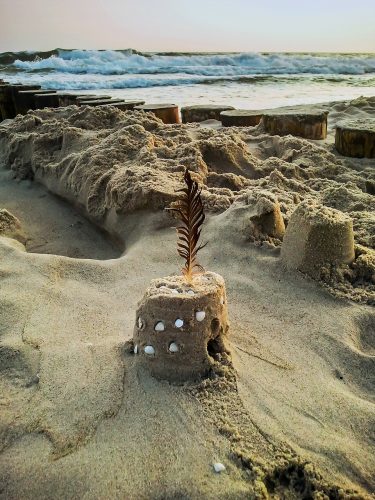 Image by Pawel Pacholec from Pixabay

Writer of comics and novels. In 2006 his first short story "The God That Failed" was published by Terminus Media in their debut comic Evolution Book 1. Since that time he has had stories published in Terminus Media's Evolution Book 2 and Evolution Special, Kenzer and Company's The Knights of the Dinner Table, and Four J Publishing's The Burner #3. Currently he is eagerly awaiting the digital publishing of his first creator-owned comic The Gilded Age #1 to be published online as well as his first novel The Dark That Follows later this year.
View all posts by John McGuire →
Tagged  John McGuire, Last Stand, Short Story.
Bookmark the permalink.