And as I wrote in the intro, I cheated a little with this comic. You see, the point of the Team Up books are to present the character Amber Fox interacting with various other Terminus Media comic books. Issue #1, written by our own Robert Jeffrey II, had her interact with Terra Force.

(And by interact I mean try to steal something from them and pretty much have the whole team hunting her down.)

Issue 2 it was suggested that Amber Fox come to the Gilded Age.

I wasn’t exactly behind that idea. Not that I’m against the idea of having other characters pop up in my comics, but more that I wasn’t even sure where to begin with such an idea. At its core, The Gilded Age is a steampunk comic book where the technology level is late 19th Century for the most part. Amber Fox is from a future where she can effectively teleport, she has laser knives as her primary weapon, nanites travelling through her body… how in the world can I possibly make something like that work and not just feel…

This was an opportunity. Not only to tell another story, get another Gilded Age “thing” out there, but to find a way to do it that I was happy with. And like so many times when I’m not sure what to do about a writing related problem – I focus on something else. Allow my mind to work on the problem “behind the scenes” for a bit.

I don’t know where the solution came from, but I hit upon the solution for my problem. It would focus on the Time Traveling aspect of Amber Fox, but from more of a HG Wells inspired way. Looking at the cover above, you can get a good idea of what I might be talking about.

More than that, this needed to have something else. A reason for the story to exist beyond “hey wouldn’t it be cool if”. 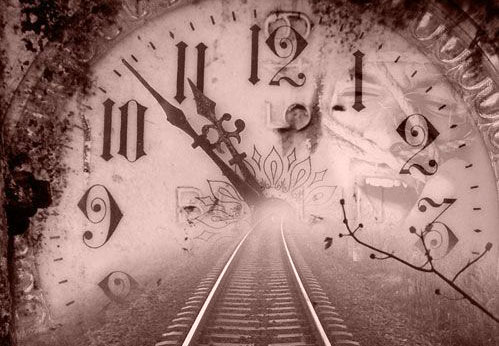 Think about Time Travel for a moment. What would you want to see?  A question pondered by fiction writers and scientists. And if you were a scientist looking at the end of the century? Could be that endings might be on your mind. And here is this woman with the ability to show you things you didn’t even know you wanted to see.

Things started falling into place. There was just one last piece: Shamus Beyale, the artist for the book. Since he came on the book as I was still working on the rough draft I thought it might be a good idea to see what things he might like to draw. I gotta think the worst thing for an artist is to hate drawing something like horses, and then reading the script where every panel apparently has a horse in it.

And bless Shamus, he came up with the last piece of the story. He mentioned how there was a “sense of death in the story” and he’d “like to see right before the end of things/eras”. End of the dinosaurs, Pompeii, the end of the neanderthals… all of this was just golden stuff and was tying the book together in a way hadn’t expected.

But he had one more… something that had a personal connection to him. From one of our emails about the project:

“The next thing would be something related to my culture. I’m Navajo and our people went through a genocide of sorts called the Long Walk. Although our culture didn’t end with it, we barely survived.” 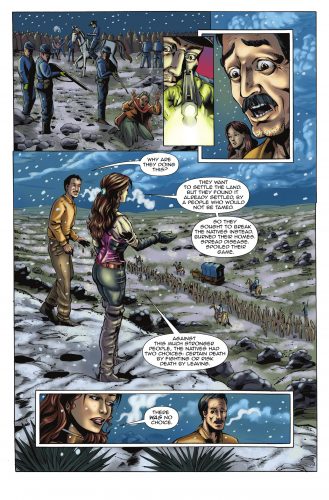 It’s something I wasn’t even aware of, but once I read a little about it, I knew we needed it in the comic.

More than anything, Team-up 2 served to remind me of the truth about comic books: That nothing is done in a bubble. You have collaborators, reach out to them and see what can get them jazzed about doing a story your constructing. Hopefully, it makes them feel as much ownership of the project as the original creator has. In the end, you will have a stronger final product.

And something you can all feel proud of being a part of.

Writer of comics and novels. In 2006 his first short story "The God That Failed" was published by Terminus Media in their debut comic Evolution Book 1. Since that time he has had stories published in Terminus Media's Evolution Book 2 and Evolution Special, Kenzer and Company's The Knights of the Dinner Table, and Four J Publishing's The Burner #3. Currently he is eagerly awaiting the digital publishing of his first creator-owned comic The Gilded Age #1 to be published online as well as his first novel The Dark That Follows later this year.
View all posts by John McGuire →
Tagged  Amber Fox, Behind the Comic, comic, John McGuire, Shamus Beyale, Terminus Teamup.
Bookmark the permalink.