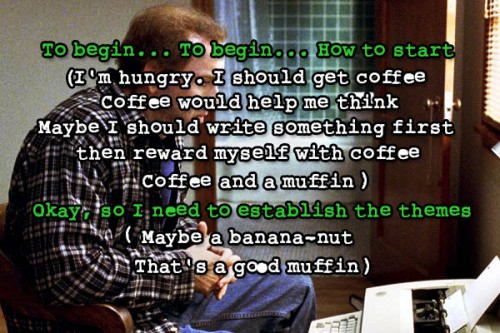 I wrote both of those things. So that means I’m adapting myself.

And it ain’t easy.

Partially because I’ve told both of these stories before and it’s hard to get up to tell them again.

But mostly because I’m struggling to find the magic 10%. What the hell does that mean? you ask. I’ll explain.

Novels have been adapted into films since the beginning of cinema. Modern readers are often disappointed with the adaptations of their favorite books: “why did they cut that?” “she wouldn’t say that!” “where is Tom Bombadil?” “that’s not how it ends!” “what are you Hollywood morons doing to my favorite thing?!?”.

You see, the major narrative mediums: fiction, drama, television, film, web series, operas, comics, and, to an extent, video games, are 90% the same. The tenants of storytelling apply across the board. Structure, pacing, conflict, character, tone. Storytelling hasn’t changed much since the days of bards and minstrels.

So, if all these mediums are so similar, if storytelling is so uniform, then what makes them different? It’s that missing 10%. That 10% (obviously just an arbitrary symbolic ratio) to me is what makes each art form its own. Every single one of those storytelling vehicles I listed above have something that the others can’t do. A great book, movie, or play takes advantage of what it does better than its peers.

I believe that you should create your work with only one medium in mind. You shouldn’t write your novel thinking about how it would make a good movie. Don’t make your comic book with visions of a video game in your head. Because that thinking limits you to that 90% and keeps you from realizing the full potential of what you’re writing. To me, that’s where you get boring books, paint-by-numbers films, and mediocre television.

I had an incident two years ago that illustrates this. I had an idea for a web series. A friend of mine has a character, an alter ego you would say, that he has created, and we were always looking for something to do with it/him. So I hit on an idea that I thought would work as a web show. I took into consideration the limitations of the form (and our wallets), but also what I thought could make it unique and interesting and funny by working within those confines. By making something that only made sense as a web series, that catered to the viewing habits of internet watchers, that made it unique.

We both loved the idea, but we thought maybe we needed to bring in a few other people to help, because we probably would need a little money. We met with an couple guys that were looking to get into producing web series. We started talking about the show; they had read the pitch already. We all thought it was a good, funny idea.

But then things went south. They started to talk about ‘opening it up’. Taking the character ‘out into the world’. Varying up the types of episodes. Making it less specific, trying to reach a broader audience. It dawned on me what they really wanted to make:

They wanted to make a mini-sitcom.

Which is a terrible fucking idea.

But what they were looking at this web series as was a means to a bigger end and to me, it was the end. They wanted to make something that could then be picked up as a regular television show if successful. So they wanted to apply many of the (outdated) rules of TV to it.

But this idea of mine, it would have been an awful, unsustainable television show.

But a great web series.

I ended up scrapping the whole thing because these guys didn’t understand new media. Had no idea. I would mention very successful web series like ‘The Guild’ and get blank stares. They had never seen a web series. They wanted to make short-form TV pilots.

They wanted to make a show that covered the 90% and ignored the 10% that would make it special. And in my experience, if you write something in one medium with another medium being your goal, you are going to create something that falls short of both.

The same thing happened when I was working on a comic book with a creator/artist who could not shut up about how much money he could make with the toys and movie rights. I kind of wish he had spent less time dreaming about being Todd MacFarlane and more time actually making the fucking comic because it’s been several years since my departure from it and the book has yet to see the light of day.

When I wrote the screenplay for Dakota Skye, I only ever thought of it as a film. Even though it’s talky, I still tried to think visually, using the language of cinema to tell the story. Film stories are flimsy things; there is not a lot of depth to them based on the limitations of running time. You have to do things, like create a love story, in brief and broad strokes. Luckily, a single image can convey what a novelist would need 5000 words to evoke. The image is at least 75% of film’s 10%.

(Getting tired of the arbitrary percentages yet? Sorry. There will be more.)

So now I’m sitting down to turn this screenplay into a novel and whoa boy. I learned on Proxy that a book requires many more words than a screenplay (a script page is mostly blank space). A lot more writing. Adapting Dakota Skye is reinforcing that bit of knowledge with a vengeance. I sat down to write the first chapter, based on the first couple scenes of the script, and just wrote what was in the script. Didn’t add any dialogue, just included very simple descriptions of what was happening and didn’t go too far into the characters’ thoughts. I did a very faithful version of the scenes that people know from the movie and script.

When I was done I had about a page and a half.

So what I’m doing now while I’m writing the book is searching for that 10%. I’ve taken away the things that make the movie a movie: the ability to convey information with imagery alone, characters coming to life through the use of actors, the ability to augment pace and emotion with things like editing and music. So, what do I replace those things with to make Dakota Skye: The Novel into an actual novel in the way Dakota Skye: The Movie was a movie?

It hasn’t been easy, but it mostly involves adding a fuck-ton more words.

At the same time, a few producers have expressed interest in considering thinking about the idea of my novel Proxy as a film. Before they can even see that, though, they need a treatment (a short prose description of the film, usually written before the screenplay) and eventually a script. So I’ve been working on that at the same time as the new novel and am facing the same challenge: the 10%.

In the case of going from the novel to the screen, the specialness you’re losing is the depth. The ability to dive into a character’s mind, to go off of tangents that may or may not enhance the narrative, to take characters on long, complex journeys step-by-step without having to use shorthand, to build robust worlds for your characters to inhabit.

The main thing you lose is the characters’ internal lives, especially with a first-person novel like Proxy. In a film, you can’t describe what a character is thinking: you need to show it. You can’t meander in and out of the world you’ve created: there’s no time. A characters thoughts, emotions, beliefs, motives, they all have to be on the screen. Sure, you can use voice-over (I did in Dakota Skye) but that’s very easy to do wrong and even when it’s done right (like in Dakota Skye) you have to use it sparingly.

So now I have to take this book I wrote, this book that was the center of my world for over a year, strip it down, simplify it, find ways to convey complex information in broad strokes, get rid of the asides and deviations, and mostly ignore the world I’ve built, and in addition serve certain non-diegetic concerns such as commercial viability, budget, and casting.

What do I get in return for these sacrifices? I get the things I’m having to lose from Dakota Skye. The image. The edit. The visceral experience that a book cannot provide. Do you know what will be better in a film version of Proxy than in the book? Fights. Chases. Sex. Things that you can do fine on paper but that movies excel at. Finding the ways you can take what you’ve done and make them visual filmic is difficult and rewarding. Sometimes you add things; sometimes things have to go.

So remember that the next time you see some stupid filmmaker fuck up your favorite book. A book is not a movie; a movie is not a book. That 10% is 100% the difference.

Taking a book and making a word-for-word film version would not just make a thirty-hour movie, it would be impossible.

Taking a screenplay and making a word-for-word novel version would not just leave you with a 45-page book, it would be impossible.

So, anyway. that’s where I am now. This crisscross of adaptation. I’m not going to lie and say it isn’t difficult, but I am determined to find each project’s special 10% that will help it make the transition properly.

This was going to be a blog post about how I didn’t have time to write a blog post. I ended up writing one anyway. I’m a big fat liar like that. There’s at least a 62% chance that I’ll have something substantial next week as opposed to this unorganized rant about how busy I am and my 10% philosophy, one of my many annoying and I’m sure incorrect ideas about writing and art (I’m sure I’ll inflict more of those on you at another point).

Anyway. Gotta go. My other projects are calling me.

Now, should I work on the adaptation…