Change Out The Calendar

When I was younger I did the same thing every New Year’s Eve. As the clock began its approach to midnight, I’d start to get melancholy about what the previous year was leaving behind. I felt like I had to internally verbalize them. I would walk through every major accomplishment for myself and anything that had captured my attention in the world that year (to various degrees as when you are 8 or 9 you don’t really know much about the “goings-on” of world politics).

In this I was able to say my goodbyes, somewhat convinced that if I didn’t do this that the people and places and events might not mean as much to me in the future. Imprinting some aspect of those memories deep within the well of my brain’s knowledge. That somehow I was beginning to see Time with a capital “T” as this freight train rolling along and most of us its passengers for as long as it will have us.

So while many people were looking toward the future with hope and joy and just that tingling sensation because “This year is the year!” I was this kid who fretted and worried that because the calendar had changed it meant everything before no longer mattered in the same way it had only a few minutes before. That somehow the tether was broken and nothing could get it back.

Change is worrisome no matter if you are 6 or 60. 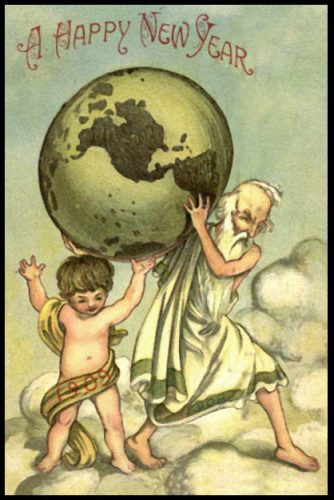 Those images of the Old Man and the New Baby troubled me. Everyone was ready to discard the old man. He’d had his life in the sun, but he was past his prime. It was time to embrace the new.

I always felt bad for that old-timer. Just by virtue of not being shiny and new it meant that his day in the sun was long since passed? Somehow that couldn’t be fair. He should be honored for what he gave, what he accomplished, and that meant taking a small amount of time to recount those things – if only to myself, well then I was going to show the proper respect to the passing of another great man.

I continued doing this for a long time during my teens. Year after year of saying this weird form of prayer by cataloging exactly what had come before. For me this was entirely about the past and not the future. Anyways, my future was marked by the end of the school year, something which didn’t occur until June.

Something changed in my twenties though. I don’t remember doing the mantra much during that decade. Maybe I did it once or twice, but that’s a complete guess. And I’m not entirely sure why it happened (or more to the point, didn’t happen). Perhaps it was because I was out and about many of those midnights with friends and the distraction was enough to  keep me from focusing on that negative of the calendar turnover. Maybe when you are on your own the world looks a bit different. Maybe because I was in a different school which didn’t have a clock measuring the days before I was gone (unlike high school).

My habit returned in my thirties, not every year, but enough that I notice them. Days long gone suddenly have a meaning that I wasn’t expecting.  You start creeping to the tipping point where you are closer to death and birth and again Time wants to crush you. It wants to figure you out, make you its bitch… if you’ll let it.

I think they really kicked in during what my wife and I called the black year (even if that year was stretched out over about 18 months). Multiple deaths with grandparents on both sides passing, our first pet as a couple dying (after 7+ years), and both of us getting laid off from our jobs (though, thankfully not at the same time).

When it came time to say my mantra during those years it was with a bit of hope and disgust. Finally, I wanted to kick that Old Man out on his ass. I wanted to forget everything about the bad and good of the previous year. As if not doing the mantra would make it so that these things would not have happened. The mantra was to look forward at potential possibilities.

2016 has been noted for the many celebrity deaths where the people were, in some cases, icons of their industry. I think for many of us this might be the first time we’ve ever had that happen to people who were a part of our lives through their music or their work on the various large and smaller screens. People we “grew up with” are now gone from the world. A true reminder of our own mortality. 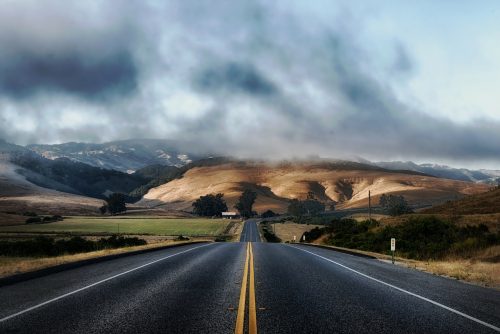 In the next couple of weeks it’ll be time to say goodbye to 2016. And while for most it will be done with a middle finger, I think I’m going to let myself take those moments again. Speak my mantra, and try to really record what I saw and what I felt leave us throughout the year. Not in an effort to hang on to the past, but in order to truly move on to a new path.

Writer of comics and novels. In 2006 his first short story "The God That Failed" was published by Terminus Media in their debut comic Evolution Book 1. Since that time he has had stories published in Terminus Media's Evolution Book 2 and Evolution Special, Kenzer and Company's The Knights of the Dinner Table, and Four J Publishing's The Burner #3. Currently he is eagerly awaiting the digital publishing of his first creator-owned comic The Gilded Age #1 to be published online as well as his first novel The Dark That Follows later this year.
View all posts by John McGuire →
Tagged  father time, John McGuire, mantras, new year's eve.
Bookmark the permalink.