I’m taking another stab at a few more of these Comic Book Challenges. You can check out my first batch of 4 here.

5- Comic that made you cry

I contend that this one did not actually make me cry… it was just something in my eyes, I swear. 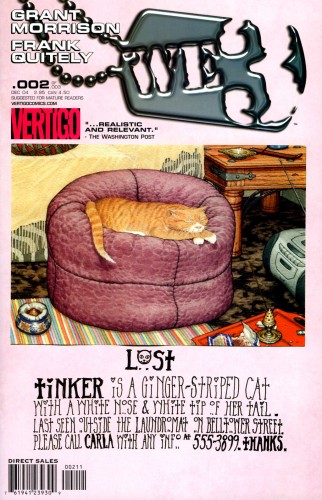 WE3 is made for sappy people like myself who can’t watch most of the animal related things on the internet lest they cause me to feel like balling (and forget leaving the channel on when the “Arms of an Angel” commercial comes on – I just can’t deal with that one).

But WE3 is about 3 animals, a dog, a rabbit, and a cat who has been outfitted by the government to be able to go into combat zones and take out the enemy with little loss of friendlies. A true modern retelling of The Incredible Journey. It really takes that whole idea of animal testing to the ultimate end game. But these animals only have one goal… to get home. So it becomes an journey of these three critters who didn’t ask to be tested on… to be made into weapons.

Describing it above makes me realize that this is one of those stories that can only really exist in comic books. But Grant Morrison makes it work. And when you get to the ending… well, again, I think there was too much dust in my house on that day. 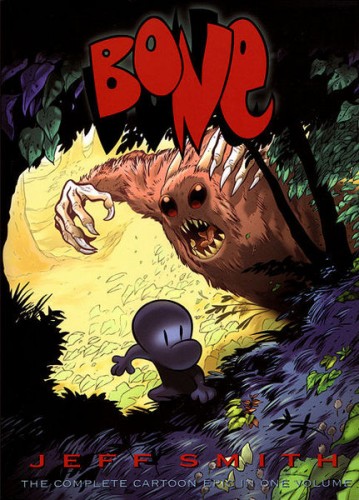 Bone carries the distinction of one of the few comic books that I actually got my wife to read that I did not write. Granted it was just one Christmas issue, that they were giving away for free, but she enjoyed it.

I was introduced to Bone by my friend Egg, who lent me the first couple of trades. And then I did not read it again for a decade. Which seems weird to even say. I wanted to read it, but I really just wanted one complete thing to get. And Jeff Smith kept coming out with more and more volumes of the book, and the potential price tag kept creeping up and creeping up, because if I was going to get the trades, then I’d end up getting them all.

And those bad boys were never in the 1/2 off trade bins at any of the cons I was going to.

But I never could pull the trigger… I’m stingy that way. And then word came down… a full Omnibus of everything would be available for $60. Done and done!

So when the omnibus came out I journeyed out to a random comic store and bought it on the spot. You could have killed a large animal (you pick the one, this tome would have brought it down). I brought it home and began reading… and reading… and then I slept before I went back to reading… until, finally I turned the last page.

I don’t know if there is another comic that has as many funny moments, as many goofy situations, while telling one of the most epic fantasy stories you’ll ever read.

I think that is the secret. It sucks you in with the comedy and makes you stay for everything else.

Many years ago I wouldn’t have believed they were doing an Avengers movie, even though I liked Avengers way before everyone else thought they were cool.

But the problem with comics going to movies is as much about the serialized nature of them as anything else. The current superhero movies (the better ones, at least) try to focus on a particular story from the books… and it works pretty well.

That said, I’d rather see some of the comics turned into tv shows. The Walking Dead has shown us that it is possible to not only follow the comic books, but use the TV version to take things down a different path than we might have expected.

And I know they are going to do a Preacher show, so I don’t want to choose that… 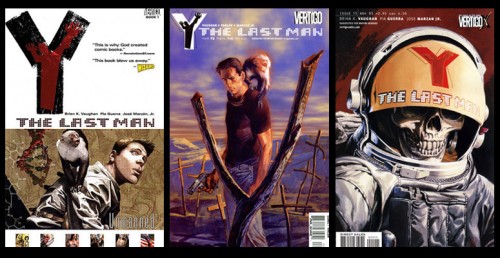 How about Y, The Last Man? Yes, it is post-apocalypse, but isn’t everything these days. Y stands for Yorrick, the last man left alive after a virus wipes out all those souls who had the misfortune of carrying that old Y-chromosone.

The comic is more than that. It is about love, as Yorrick’s goal is to find his girlfriend… somewhere out there in a world where all those people who wished that women ruled the planet… well, they get to see that people are people no matter their gender. There are good ones and there are bad ones.

The comic lasted 60 issues and tells a full complete story. The roadmap is there, they only need to do it.

Sadly this one is well outdated, and the movie attached to it has some problems, but I love this poster, and had it as my wallpaper on my work computer before the movie came out. 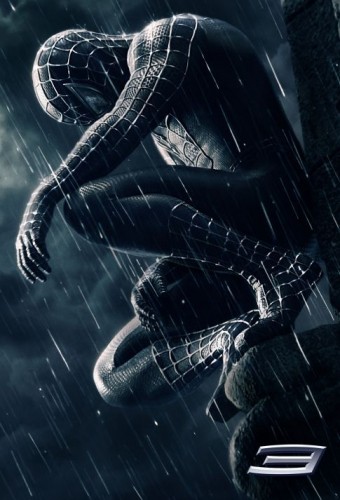 I love the black costume, maybe because when I started reading comics that’s what Spidey was wearing and even though I knew him from the various cartoons in the Red and Blue, the simpleness of the black and white sold me. And to see it in a movie was not something I’d have expected.