Every Day is Exactly the Same

It has slowly but surely become Seattle South here in Atlanta over the last week or so. In fact, it wasn’t until yesterday that something from legend arose in the sky once again. People everywhere ran screaming from it, shielding their eyes and shedding layers at it attempted to cook them where they stood.

That beautiful sun, with us again.

It may sound like I’m complaining, but I’m not (mostly). However, this continuous week of the same thing made me temporarily wonder if I’d stepped into Groundhog Day. Had the radio begun playing Sonny and Cher (in between my bashing of the snooze button), I might have never gotten out of bed. I would have been frozen in an odd sense of fear at repeating the same day over and over and an odd sense of fear at having the opportunity to repeat the same day over an over. 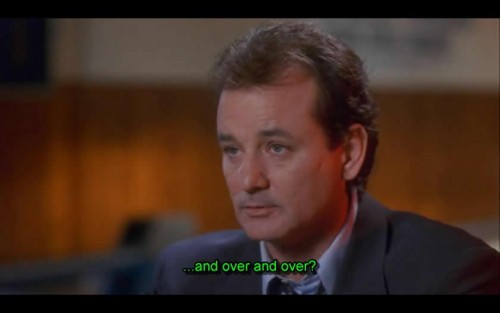 Much like a play on the old What If games, how much of the way we live our lives would change if you could act any way you wanted to and no one would be the wiser when they woke up? The entire world having a weird amnesia about the events of the previous day.

That fight with your spouse – nope, never happened.

Showed up late to work again and got a talking to from the boss – no worries, they don’t remember.

Well, you know the plotline to the movie (whether you liked it or not).

But are we nice to people, do we follow the rules of polite (and sometimes not so polite society) because of believing it is the right thing to do? Or do we do it because we are afraid of the alternative?

Even worse, are we not doing the things we are supposed to do because we’re afraid of what the outcome will end up being? That freedom we might gain from not having the normal restraints on our actions… why are we letting that fear penetrate and control our decisions? 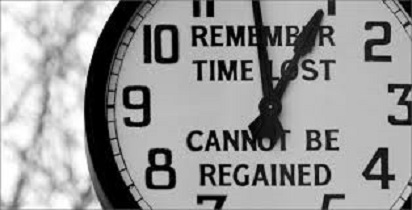 There’s the very cliche’ saying of living each day as if it were your last, but I’ve never liked that particular saying. Typically the people quoting it don’t live on the same planet you and I live on. They don’t have to worry about bills or the day to day BS the rest of us put up with. Yet, there is something in there. A small kernel of information, a proposal of sorts that does ring true enough.

What are you waiting on?

We all lay in bed at night, just before we drift off into that sweet relief, and wonder about IT. Lament IT. That thing you’re working on (novel, boat, plans to take over the world)… what’s stopping you? Time? Energy? Life?

Don’t you think its time to put aside the excuses and just get it done? I know you’re tired. I know you’ve only got 15 minutes tonight. But now’s the time. We’re not going to get stuck reliving the same day over and over.

Oh, wait. Maybe we already are. So what are you going to do about it?

Writer of comics and novels. In 2006 his first short story "The God That Failed" was published by Terminus Media in their debut comic Evolution Book 1. Since that time he has had stories published in Terminus Media's Evolution Book 2 and Evolution Special, Kenzer and Company's The Knights of the Dinner Table, and Four J Publishing's The Burner #3. Currently he is eagerly awaiting the digital publishing of his first creator-owned comic The Gilded Age #1 to be published online as well as his first novel The Dark That Follows later this year.
View all posts by John McGuire →
Tagged  Groundhog Day, John McGuire, Life.
Bookmark the permalink.