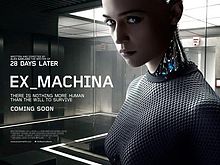 Disclaimer: This is a mostly spoiler-free review

In the modern realm of wide-release films, it’s rare to see science-fiction movies that are:

B. Not reliant on hyper-violent technological advances

Ex Machina is both of these.

I saw this movie in a cozy, nearly empty theater.  I felt torn about the empty part, because I worried it might mean not enough people were interested in the kind of movie I’d like to see a whole lot more of. Apparently that’s not the case, since to date it’s netted a cool $18.7M. That’s good news. Great news, actually. Meanwhile, the experience was almost ruined by a few stereotypical loud-ass movie talkers. But the offending parties managed to shut up long enough for the rest of us to focus.

Thank goodness for that.

At first, Ex Machina comes off as boy-meets-girl completely flipped on its head. Caleb (played to nerd-fection by Domhnall Gleeson) is an apparent coding whiz for a huge computer search engine company. When he’s selected to travel to a mysterious, almost CIA-like black box facility, he does so with glee. And who wouldn’t? For an opportunity to meet Ava, the world’s most advanced android, most of us would leap in headfirst. And the setting in Ex Machina is so realistic, one begins to believe something like this can…and will…happen someday soon. Go Caleb. Get some.

If Arnold Schwarzenegger was the perfect person to play the original Terminator, Alicia Vikander (who plays the aforementioned android) is perfect-er. She’s eerie. She’s beautiful. And she nails every little tic you’d expect from a woman-robot. It’s clear from the beginning who owns the dialogue between Ava and Caleb. And it ain’t Caleb. I have to believe Lady Vikander will score big based on her performance here. She echoes the strength of Game of Thrones’ super-heroine (Emilia Clarke’s Daenerys Targaryen) and frosts it with the sort of intelligence you’d like to see Hollywood give more of its female roles.

For those who aren’t aware of what the Turing Test is, I recommend you study the concept. It’s the frontline premise of Ex Machina, and quite possibly (in part due to this year’s epic The Imitation Game) a new piece of vernacular everyone will soon become familiar with. Essentially, the Turing Test is the methodology for determining whether or not an A.I. can behave human enough to trick us into no longer knowing it’s a computer. If the computer fools the human, it passes.

Turns out the one inviting Caleb to perform the world’s most important Turing Test (on Ava) is the buff yet emotionally FUBAR Nathan (played to frat-brother genius levels by Oscar Isaac.) Nathan is like a chessmaster working both sides of the board. He’s got tech game like no one’s business, and a penchant for working off his hangovers by pumping iron and intimidating the slim, non-alpha Caleb. Nathan’s motivation is the question of the hour. It’s clear he wants more than just a Turing Test. And it’s obvious he gets his rocks off by head-fucking people. But the lines between antagonist and protagonist are blurred, just as they should be.

Where Ex Machina really succeeds is in its pace, its dialogue, and its atmosphere. Caleb’s encounters with Ava are blocked off into seven sessions, each of them growing in intensity. Conversations between Caleb and Ava have a permanent shadow lying overhead, a subtle reminder that she’s smarter, quicker in her learning curve, and possibly deadlier. And the hyper-realistic, we-could-picture-these-moments-actually-happening, verbal sparring between Caleb and Nathan leave one needing to know what comes next. Even once our suspicions of dread become tense enough to snap.

Not to be underestimated is the melodic yet somewhat dark soundtrack. Composers Ben Salisbury and Geoff Barrow blend their music so well into the film I knew halfway through I needed to buy it and play it…over and over again. Which I did end up doing. 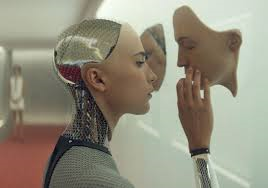 And then there’s the end sequence. It’ll be hard to watch without wanting to see it again and then immediately becoming a part of the growing online discussion. I’ve read many takes on the path of evolution Ava takes. Some speak of sweetness, others of liberation, but I saw something darker. Watch it twice, I say. And tell me you don’t sense one possibility for how the world might end.

So if you crave MORE than robots with laser guns, spaceships doing things that are impossible in space, and over-the-top future battles, go see Ex Machina.  It’s a solid A, and the best sci-fi movie to hit theaters in a long, long time. And if I have a special love for it, it’s also because the director, Alex Garland, is also an author and screenwriter. Would that I were so talented.

Get into my coffee table philosophy series here.