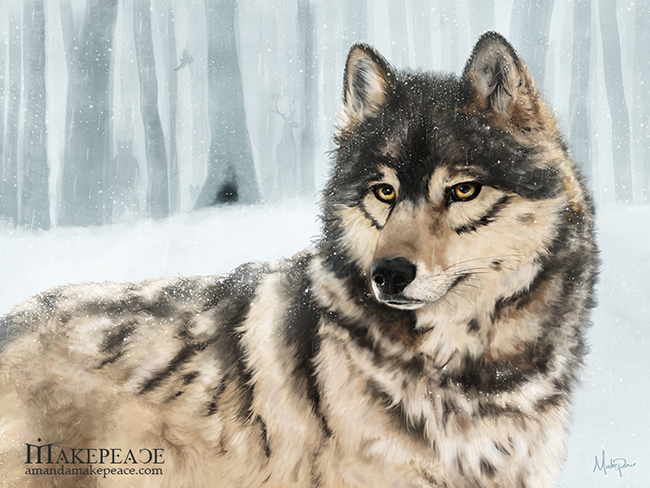 “But he is not always alone. When the long winter nights come on and the wolves follow their meat into the lower valleys, he may be seen running at the head of the pack through the pale moonlight or glimmering borealis, leaping gigantic above his fellows, his great throat a-bellow as he sings a song of the younger world, which is the song of the pack.”

― Jack London, The Call of the Wild

Forest Guardian is my newest personal painting. It’s another one of those ideas I’ve had in the back of my head for a while, but it wasn’t until a friend contacted me, asking me if I had any wolf paintings, that I was spurred into action. The painting above is Version One, for my friend. Version Two will be the original idea, that included war paint and a feather entwined in the wolf’s fur. Here’s a peek at my progress on the second version of the painting: 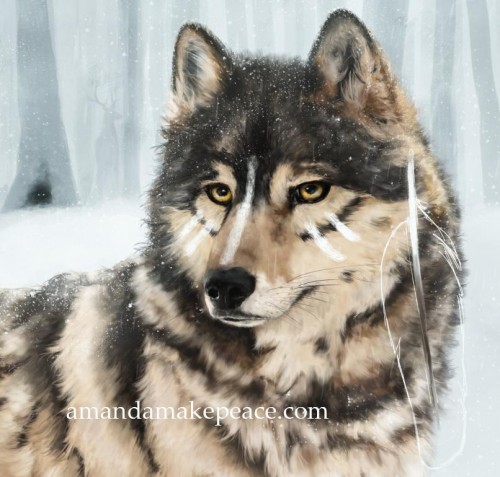 Next week, I can’t promise which day yet, prints will be available to purchase of both versions. I’ll be sharing a link on my various social media sites. The big difference with these prints and all future prints will be the number available. I’ve decided to begging selling limited edition prints; which just what it says, there will be a limited number. When they sell out, that’s it, they are gone. Each artwork will also have only one canvas print edition–a one of a kind. I’ll explain this all in more detail next week. Be on the look out for my announcement!

Amanda Makepeace is an award winning illustrator inspired by nature, mythology, magical beings, and distant worlds. She is the co-founder of the Bird Whisperer Project, a monthly art challenge focused on spreading the the love of birds and art making for everyone. Her art has appeared in ENnie award-winning games and on the covers popular independant novels and anthologies. Her latest project is the cover art for the Long List Anthology Volume 4, a book featuring Hugo nominated stories. Amanda is a regular at Fantasy and SciFi conventions in the southeast, and an award winner at JordanCon, DragonCon, ChattaCon, and LibertyCon. http://www.amandamakepeace.com
View all posts by Amanda Makepeace →
Tagged  art, digital painting, fantasy art, guardian, makepeaceart, nature, wildlife, wolf.
Bookmark the permalink.