Giving Thanks for Gilmore Girls

Let’s face it, I am not the demographic CW (then the WB) had in mind when they launched this little New England drama about a mother and her teenaged daughter in the Fall of 2000. I imagine that they cast their net for a slightly different group consisting of the other 50% of the population and hoped for the best.

Yet somehow I am not only a fan of the Gilmore Girls, but I have been since almost the very beginning and up until the very end. 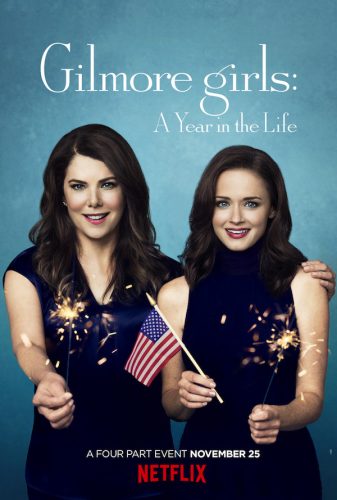 Normally that might have been the end of my relationship with the show. However, something else happened. My wife bought the first couple of seasons. I’d come home from work, and they’d be running almost non-stop (well that and Veronica Mars) in a weird/obsessed fandom. And so while the show was over and done, it still was a part of my life. Without even realizing it, we’d watch 2 or 3 (or 4 or 5) episodes in a night. Episodes we saw when they originally aired. Then later, episodes we’d seen once or twice (or three or four…).

I’m not sure how it is in your house. Maybe you play music in the background while you cook dinner or clean up or play games on your phone or even nap. In college, my roommate and I had Clerks and Mallrats running non-stop as the soundtrack to many a late night Duke Nukem playing.

For my wife Gilmore Girls playing in the background is her music.

When she wakes up far too early, but can’t (chooses not to) go back to sleep in the bedroom, she puts it on. As a result I can only imagine half of her dreams exist within Star’s Hollow.

When Netflix got ahold of the show, the dvds were no longer needed.

Then the news came about a revival. We’d done the Kickstarter for Veronica Mars for the movie, and honestly if they’d needed a Kickstarter for the Gilmore Girls Netflix show, we would have ponied up for that as well. Since that wasn’t necessary, we’ve instead been on countdown ever since they told us the premiere date. And this Friday evening the two of us will be in the midst of the episodes. And for someone who doesn’t stay up late very often, I can foresee a very late night to make sure we watch them all.

And I fully expect to wake up the next day to that familiar “Lalalala” echoing through the house.

When fellow Guildmate, Chad Shonk, was on his movie festival tour with Dakota Skye, a movie from a teenage girl’s point of view, he often was asked how he could write for such a character. His reply was that anyone who knew him, also knew that deep down he was a teenage girl.

While I don’t think I’m a teenage girl, it certainly isn’t a bad thing to try and tap into some of that.

Here’s the thing about Gilmore Girls… it’s just a well-written show. The dialogue, carries a rhythm of its own. There is a music as Lorelei and Rory move through their lives, but when it really comes to life is when the two of them are verbally sparing. The rest of us may not understand every piece of the shorthand (and longhand), but they wield words with a dexterity only matched in an Aaron Sorkin production.

Considering anything Sorkin writes makes me want to break my fingers as it is nearly impossible to attempt to duplicate… this is high praise from me.

So with it being Thanksgiving week –

Things to be Thankful for with the return of Gilmore Girls:

He’s the character we (at least in my house) wanted Lorelei to get together with. The Sam and Diane of the show who if they could only get their shit together at the same time everything would just work out.

With Star’s Hollow being a collection of crazies (eccentrics), he’s probably the only grounding force within town limits… something which causes all sorts of great moments throughout the show. Yet, he’s sucked in regardless.

2 – Rapid paced dialogue that dizzies the rest of the cast.

I’m hopeful that it won’t feel like we’ve taken a break from our Girls. That they’ll just flow right into it with no hiccups, as if they never left our sides in the first place. 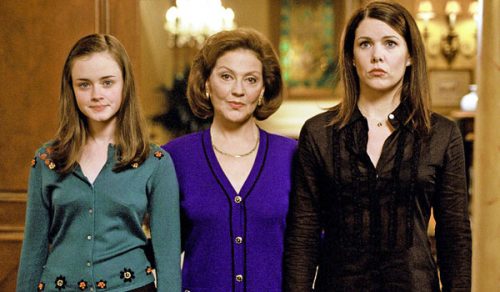 4 – Seeing how the three Gilmore women deal with the huge absence in the room.

When Edward Herrmann passed away a couple of years ago, I was both saddened by his loss, but happy that one of his final testament existed within this show. As Lorelei’s father and Rory’s grandfather, he exuded an affection for both that were as different as the sun and the moon, but I never doubted its existence (even if Lorelei might have).

The return of the show has a very big hole in it with his passing. I have no doubt it will be addressed with love and care and probably a little humor when appropriate.

I also think that it might get a little “dusty” in my house the first time it is referenced.

As I alluded to above, we’ve seen all the episodes, multiple times. Season have been watched and rewatched in order. Random (to an outsider) episode paths have been followed. Lesser favorites skipped only to be found on a future watch (and wondering why it was on the skip list in the first place).

Finally, we’ll get to see a bit more of where their lives went after they departed from the air. Does my own ideas match what they’ll end up showing? The unknown story still lies ahead of us… and isn’t that why we watch these shows?

To find out what happens next.

Writer of comics and novels. In 2006 his first short story "The God That Failed" was published by Terminus Media in their debut comic Evolution Book 1. Since that time he has had stories published in Terminus Media's Evolution Book 2 and Evolution Special, Kenzer and Company's The Knights of the Dinner Table, and Four J Publishing's The Burner #3. Currently he is eagerly awaiting the digital publishing of his first creator-owned comic The Gilded Age #1 to be published online as well as his first novel The Dark That Follows later this year.
View all posts by John McGuire →
Tagged  Gilmore Girls, John McGuire, Netflix.
Bookmark the permalink.