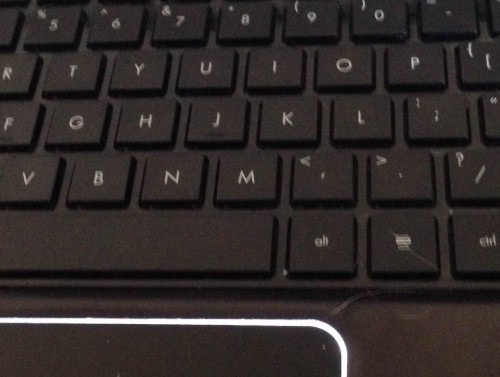 Ugh. Not you again.

I don’t feel like writing. Not this, not anything. Sometimes it happens. There isn’t one part of me that wants to be in front of this keyboard. My eyes hurt; I’m tired. I just got my daughter down for a nap: we’ll see how long that lasts. I’m just not feeling it right now and the monitor of my laptop is staring at me like an asshole I want to punch in its stupid face.

I am writing to fulfill my obligation to my friends/guildmates and nothing more.

As I type this sentence I have no idea what the next one is going to be. I started working on a post about the time I worked for Quentin Tarantino and about his recent controversy but it’s not done and it’s not going to be done today. I’ll do it next week. Man, I don’t want to be writing at the moment.

So, because I don’t want to write, I will write.

Come on. Words words words. Mary had a little lamb. Little lamb. The rain in Spain falls mainly on the plain. Soylent Green is people. Darkness. Imprisoning me. All that I see. Absolute horror. I cannot live. I cannot die. Trapped in myself. Body my holding cell. Yeah-uh!

(Editor’s Note from the future: There does end up being a point to this. So bear with me.) 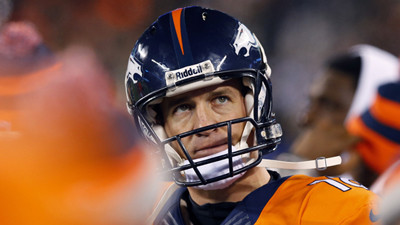 That Super Bowl sucked, didn’t it? I was about 50-50 on who was going to win and despite my hatred of the Broncos (any fellow Browns fan will understand) I sort of wanted Peyton Manning to get another ring. Apparently, he didn’t want to. Holy cow. Any sporting event is boring if one of the teams doesn’t bother to show up. I bet even some Seahawks fans were somewhat disappointed. That was plain awful.

The game being yesterday did stir up some frustration for me. Geeks have spent their whole life defending what they love, protesting that they shouldn’t be looked down up on and shit on for loving comic books or video games or science-fiction. And we’ve pretty much won that war. If the geeks have not inherited the Earth, we sure as hell, for better or worse, inherited popular entertainment.

So a group whose entire plight (and I use that term relatively. this is largely a group of privledged white boys and girls) was being derided for liking the things they like are now using any occasion to deride the things other people like. Part of me gets it. I was picked on by jocks in high school, too. But guess what? That jock who beat me up? I’m damn sure he went and saw The Avengers. Your teenage years are a fucked up time and I’m way too old to worry about how people acted towards me when we were kids. I was a dick as a kid. So were you. Ask the other three members of this site if I was a perfect person, a beacon of kindness and friendship and caring, when I was sixteen. They would laugh in your face. We were all fuckwads in high school. We were just all different types of fuckwads.

Like sports. Don’t like sports. Fine. But you are a damn hypocrite when the first thing you do on Super Bowl Sunday is run to your Twitter and Facebook and Tumblr and tell EVERYONE how dumb they are for liking sports. Bite me. You are traitors to the principles of geek culture, nerdy little Fidel Castros, overthrowing a dictator only to become dictators yourselves. (Okay that’s real dumb and hyperbolic but hypocrisy is something that infuriates me. Especially in myself. It’s part of me like it’s part of everybody.)

Inclusion works both ways. Other people can enjoy what they want to enjoy and it doesn’t affect you one iota. Let it be. Don’t watch the game, but don’t make fun of people who do. You are no longer geeks. You are hipsters. That’s what hipsters do. Do you really want to be a hipster? While you’re at it, stop watching shows you know you hate just so you can hate on them more accurately. I stopped watching “Heroes” midway through the second season and never looked back, not even ironically. Don’t like “Game of Thrones”? Just dandy. Don’t tune in every week just so you can tell me what you hate about it. That makes you a giant dick.

(The funny thing is so many of them absolutely love MMA and UFC and fill up my Twitter stream every Saturday with accounts of thugs beating the shit out of each other for their enjoyment. And then turn around and complain that everyone is talking about football on Sundays. MMA’s a sport, idiots. YOU LIKE SPORTS.)

I’ll end this dumb rant with a Tweet I sent out a few days ago that is my final word:

“I enjoy both the Super Bowl and the Oscars, but am neither a date rapist nor a homosexual.”

We’ve taken a rejection of ‘us and them’ and turned it into ‘them and us’.

I’m this close to turning in my geek card. Traitors.

So, speaking of Oscars, Phil Hoffman died. Fucking tragedy. Really. I was devastated. Had to leave the house and walk around the block to dry my tears (although it was raining and it didn’t do much good). He was easily one of the two or three best actors working in film today. He wasn’t even 50. Just a shame.

Quick note: several people yesterday claimed the opinion of  “He was using heroin. Fuck him. He should know better. I mean, he has kids!”. Chemical dependency is not a choice, not something people can be reasoned out of. I am lucky enough to have never gone through it, except for maybe caffeine, but have been touched by friends who have and I tell you it’s not something you can chalk up to a “bad life decision”. Addiction never leaves you and can come back to destroy you at any moment. It is a constant battle.

You never beat addiction; the best case scenario is that you play it to a draw. 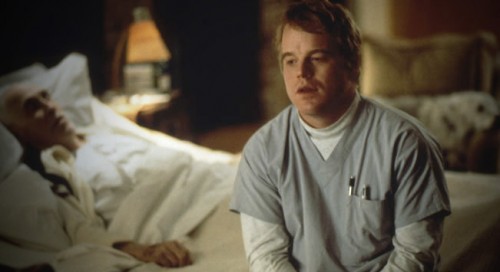 My favorite Phil Hoffman performance, and I think every one is worth watching, is as Phil the Nurse in Magnolia. In a film chock full of crazy, conflicted, selfish, distraught, sad characters, Phil is a beacon of good and love. He radiates caring in a way I’ve never seen on screen. His quest to find a dying man’s estranged son is pure selflessness and the way Hoffman portrays it is heartbreakingly genuine and beautiful. I know Tom Cruise got all the attention (and nominations) for that film but the true masterstroke in P.T. Anderson’s epic of anxiety and helplessness is Hoffman’s nurse, who Anderson named “Phil” because he knew exactly who he would be casting in the role.

If I were to hold a Phillip Seymour Hoffman memorial film festival, I would watch the following:

Magnolia
The Talented Mr. Ripley
Synecdoche, New York
Charlie Wilson’s War
Capote
and Almost Famous, where he plays the legendary Lester Bangs and steals every moment he is on screen.

And nearly every other film that he made. Although I thought that DeNiro one was pretty bad. And Savages was garbage.

Rest in Peace, Phil. A peace it seems you had a hard time finding in life. I didn’t know you, so I can’t mourn like your family and friends. I can only mourn the passing of a legend and bemoan the fact that there won’t be any more Phillip Seymour Hoffman performances (after the last Hunger Games comes out). A damn, damn shame.

So I didn’t want to write anything and here I am coming up on 1500 words.

Hey! Maybe I found a point.

A writer should write every day. If it’s ten words or three thousand, you should put something down. If it’s nonsense or if it’s gold. If it’s a useless blog post or the final touches on your masterpiece. I truly did not want to sit down and do this. I had nothing to say. I still don’t, really. But I did it anyway. I typed and typed and typed and typed.

I forced my brain to expel letters, form words, construct sentences, build paragraphs, express thoughts. It didn’t matter about what: I rambled about the Super Bowl and a dead movie star. But I got it down, got through it. Broke through that wall.

I think now I’m going to be able to get some work done on Chapter 6 of my book.

I wouldn’t have said that an hour ago. All I wanted to do today was sit my fat ass in front of the TV and see if that new “Black Sails” show is any good, catch up on “Brooklyn Nine Nine”, and maybe dive into the new Blu-ray of my favorite silent film, FW Murnau’s Sunrise: A Tale of Two Humans.

But now my fingers are limber. My brain is a little more awake. I realize I am capable of forming thoughts today. Maybe not great ones, but one doesn’t need greatness to work on a first draft. You only need the will and the time.

So I guess this post will go down under the category of ‘writing advice’, although in sort of a meta way. This has been a document of me writing myself out of my not-wanting-to-write mood. When the last thing you want to do in the world is write, get writing.

I promise I’ll be back next week with an actual post. Most likely that piece about Quentin Tarantino: the man, the filmmaker, and the lightning rod.

Shit. The baby’s waking up.

Chapter Six will have to wait until the afternoon nap.

PS – If you don’t understand the title of this post, look it up. It was the first thought I had when I learned about the passing of Mr. Hoffman.