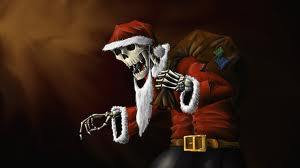 So here we are. It’s the ass end of the holiday season, and 2014 will be here any minute. For many of us this means a return to the long, slow slog between January 2nd and…oh, I don’t know…Memorial Day. It tends to be a brutal time, these next five months. It’ll be cold. It’ll be wet. It’ll be vacation-free. It may even suck.

I’m looking forward to it.

With the end of the all-consuming crush of Thanksgiving, Christmas, New Years, and all the volcanic activity in-between, my fingertips will be back on the move. I’ve no fewer than three big writing projects slated for completion in  2014. Here’s the rundown on each one:

1. Dark Moon Daughter – Book II of the Tyrants of the Dead Trilogy

Yes, it’s true. I finished the first draft of DMD eight years ago. But now, much like an alluring ex-girlfriend, I’m coming back to it. You see, originally Down the Dark Path (Book I) was meant to be a solo work. No sequels, no prequels, just a lonely epic lying on the edge of the night. But shortly after I finished DDP, I realized I’d only just begun. I’d only lightly grazed Andelusia, Garrett, Rellen, and the Ur. I needed to drill deep into the minds of my protagonists, and deeper still into the topics I thrive in: heartbreak, sacrifice, betrayal, and death. Dark Moon Daughter takes a much different perspective than DDP. It’s the meat on the marrow, the flank steak on the beast. I’m nearly done editing the final draft. After a few test reads, it’ll hit the market, and I’ll be happier for it. My deadline is March 21st. The pressure is on, and I love it.

I haven’t talked much about Hollow Empire. Don’t take it for disinterest. I love writing it so much, I’m a little sad to have finished my portion of the first draft. I’m writing the characters Nadya Veraltz and Murgul has-no-last-name, and I’ve fallen quite in love with both of them. What’s it about? Well…Hollow Empire is a post-apocalypic dark ages drama. It’s an, ‘Imagine if the apocalypse happened in a medieval setting‘ concept. A horrific event has torn the nation of Vhur to tatters, leaving Nadya, Murgul, and John R McGuire’s characters to pick up the pieces and survive. We’re releasing it in six separate episodes, each available in e-book form. At the end of the e-run, we’ll release the entire saga in softcover form. If all goes well, we’ll move on to Season Two and beyond. I’m thrilled to be a part of Hollow Empire. The episodic format and dystopian setting are both new for me, and as it turns out, I’m loving it. Cue McDonald’s music.

3. Darkness Between the Stars – Prequel to the Tyrants of the Dead trilogy

I could’ve put a number of projects here in this third spot, but Darkness Between the Stars is  the one I’m most looking forward to. After making sweet, sweet love to the original trilogy for the last twelve years, I realized I didn’t want to let it go. There’s still more to tell, and I’m a sucker for origin stories. More importantly, I’m a sucker for origin stories that focus on the antagonists. I love the bad guys, if you’ve yet to figure out. I’m still in first draft mode for Darkness Between the Stars. In writing it, I’m taking a completely different approach than all my other works. The entire thing (either one or two books) I’m writing in first-person perspective. One character, one voice, one path to the world’s bottom. Readers will witness the antagonists (yes, the Ur) work their evils from a singular point of view. I believe there’s beauty in sticking inside one character’s state of mind. I think you’ll find the same.

So stick with me, Tessera soldiers. I’ll still keep blogging my usual odds and ends, but I’ll spruce it up with excerpts, updates, new art, and all kinds of sexy links to keep you busy.