How To Get Published Panels

I was looking at my list of blogs I’d sketched out back in December. I don’t normally do that, but sometimes it’s not so easy to figure out what a particular week’s blog may end up being about. So I decided to plan some out. I glanced at it today and realized that there were supposed to be a few convention reviews on there, but seeing as conventions have all pretty much been canceled, that’s not going to happen

But then I realized that even not going to a convention, there are similar things that I’ve heard at the How to Get Published In Comics style panels over the years.

Here’s the thing, I’ve been reading comics since I was 11. I started writing adventures of some of my own characters around this very same time in a blue notebook that I still have. Yeah, they were highly influenced by the Marvel comics I read at the time, and looking back there is very little in the way of story. More of this guy fights this guy and then stuff happens.

But wanting to write comics has been in my blood since back then. In high school, I wrote up an Image Comics style pitch and full script (even if I didn’t know what that was supposed to really be) for a character called Knightmare (see, he was a Knight, but also would deal with supernatural things… things that go bump in the “Night” – I’m so clever). Another time I entered a Wizard Magazine contest to write a Captain America story… I never even got a rejection letter for that one.

It all seemed like this nebulous idea. How do you get into comics? How do you break-in, especially when you can’t even draw stick figures? So when I really started going to conventions, I pretty much would always go to the panels that talked about Breaking In. Finally! Here was the secret formula for getting my big toe in the door. Yet, they typically didn’t have that “How to guide” that I was hoping for.

Heck, one of them once said (I can’t remember which writer said it) “The joke in the industry is that once someone breaks into comics, they close that door so no one else can get in the same way.

Most of them seemed to be summed up in a couple of sentences:

None of these things are very helpful (well, the first three are helpful in getting better). 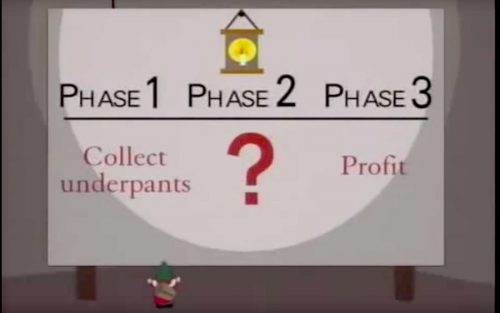 Other panels at times were much more South Parkian:

There was a lot fo talk (in some of the Indy comic panels as well) where they brought up social media, but even that wasn’t overly helpful:

All of these suffer from the same problem: there is never much in the way of details. Like what exactly are we supposed to be doing? One person mentions Twitter and then three others say they never use it. One person mentions Instagram and 2 others say you need to be an artist for that to work. Others say Facebook and then a bunch mention that is only for “real” friends.

Where are the examples? The helpful guides? What are the steps that you took? What are the postings you did that made ripples? What times did you post where it was better than other times?

Of course, then they shrug and say “just keep at it” and you’ll see!

Details are what is lacking. We speak in generalities about things that aren’t ethereal, plucked from when the world was new. Give me a step by step. What did you do?

And yes, not everything is going to work for everyone, but there is a roadmap you could at least give people, even if the edges are filled in completely and the scale is wrong.

A couple of Dragon Cons ago there was a panel on publishing through one of the Indy comics. In it, I learned that the best way to get an Indy book is to work for Marvel and DC first.

So get into the places that NO ONE can tell me how to get into, just so I can potentially work with one of the Indies? How does that make sense?

Here’s the thing, I don’t know the answers. I know there are things I should have done (probably), but who knows? Really, who knows? So my own answers based on nothing but feeling a little better about my own efforts:

At this point, with Kickstarter, you can potentially do it. Save money to hire an artist if you are a writer. If you are an artist, maybe befriend one of us writers to have an extra set of eyes. But put it out there. You sitting on your product isn’t going to do anything for you. And it is hard to push the publish button. It’s hard to be out there in front of people potentially having them hate what you’re doing. But it’s better than the alternative of not doing something.

As to dreams of writing for the Big 2… yeah, maybe, but at the very least I’m doing something. That’s a start.

Writer of comics and novels. In 2006 his first short story "The God That Failed" was published by Terminus Media in their debut comic Evolution Book 1. Since that time he has had stories published in Terminus Media's Evolution Book 2 and Evolution Special, Kenzer and Company's The Knights of the Dinner Table, and Four J Publishing's The Burner #3. Currently he is eagerly awaiting the digital publishing of his first creator-owned comic The Gilded Age #1 to be published online as well as his first novel The Dark That Follows later this year.
View all posts by John McGuire →
Tagged  comic conventions, How to break into comics.
Bookmark the permalink.