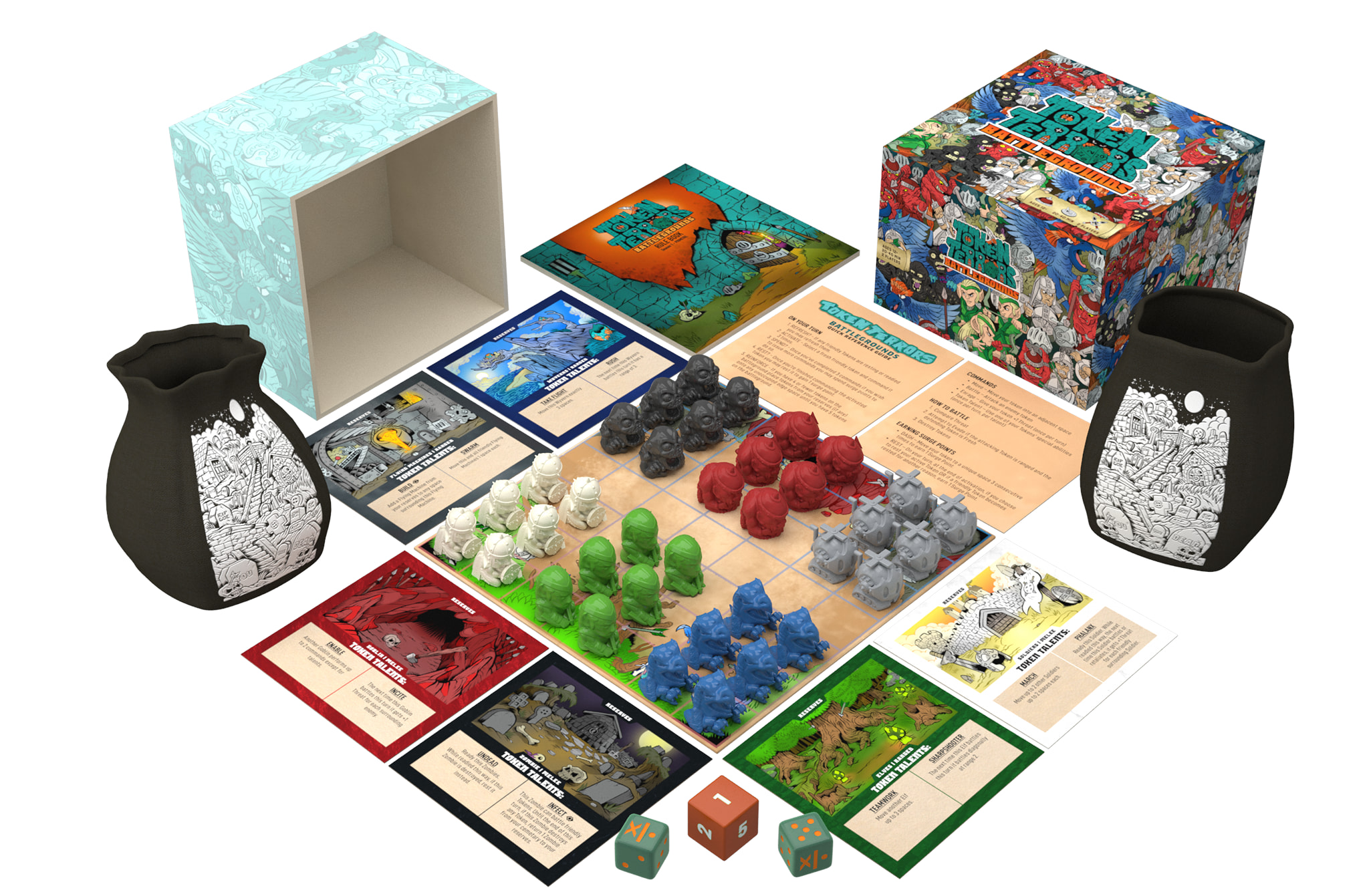 JULY 9, 2020, BALTIMORE, MD – A new board game that doubles as a source of collectible gaming miniatures is set to launch a Kickstarter campaign on July 21st. Token Terrors: Battlegrounds, the first gaming creation by Baltimore artist John de Campos and Terrible Games, is a fantasy-themed one-versus-one strategy war game featuring detailed figures that can be used in other tabletop games such as Magic: The Gathering and Dungeons & Dragons.

The initial Token Terrors: Battlegrounds line will include miniature goblins, soldiers, zombies, wyverns, elves, and flying machines – made by manufacturing company Gameland Importing & Exporting Co., Ltd. – each with their own unique abilities and strategies. Copies of the game, which will come with two of the factions in sets of ten, are $45 for Kickstarter supporters.

Unlike other miniature-heavy tabletop games, Token Terrors are intended to be used outside of the core Battleground experience as minions for other RPGs or as more immersive tokens for trading card games, particularly Magic: The Gathering. The factions for the initial run were chosen specifically due to their popularity in token generation Magic: The Gathering decks.

“I’ve been playing tabletop games and RPGs for many, many years, and I’ve always loved the mechanics of summoning minions and token creatures, but I always felt like the available offerings for representing them on the battlefield were lacking,” said Token Terrors creator John DeCampos. “They were either too expensive or too cheap, so I’m hopeful that Token Terrors will fill a niche for people like me.”

The Battlegrounds game has been diligently playtested by hundreds of people over the last three years at gaming events and conventions such as MAGFest and PAX East and has a rich background of lore and vivid artwork created entirely by de Campos and the Token Terrors Games team. Following a successful Kickstarter launch, there are future plans of a seasonal model that will move on to new factions making older seasons more desirable as collectibles.

Token Terrors: Battlegrounds launches on Kickstarter July 21st for a pledge of $45, and will retail for the same price following a successful campaign. For more information visit www.tokenterrors.com where you will find a mailing list signup for regular updates as well as lore backgrounds and additional game information. 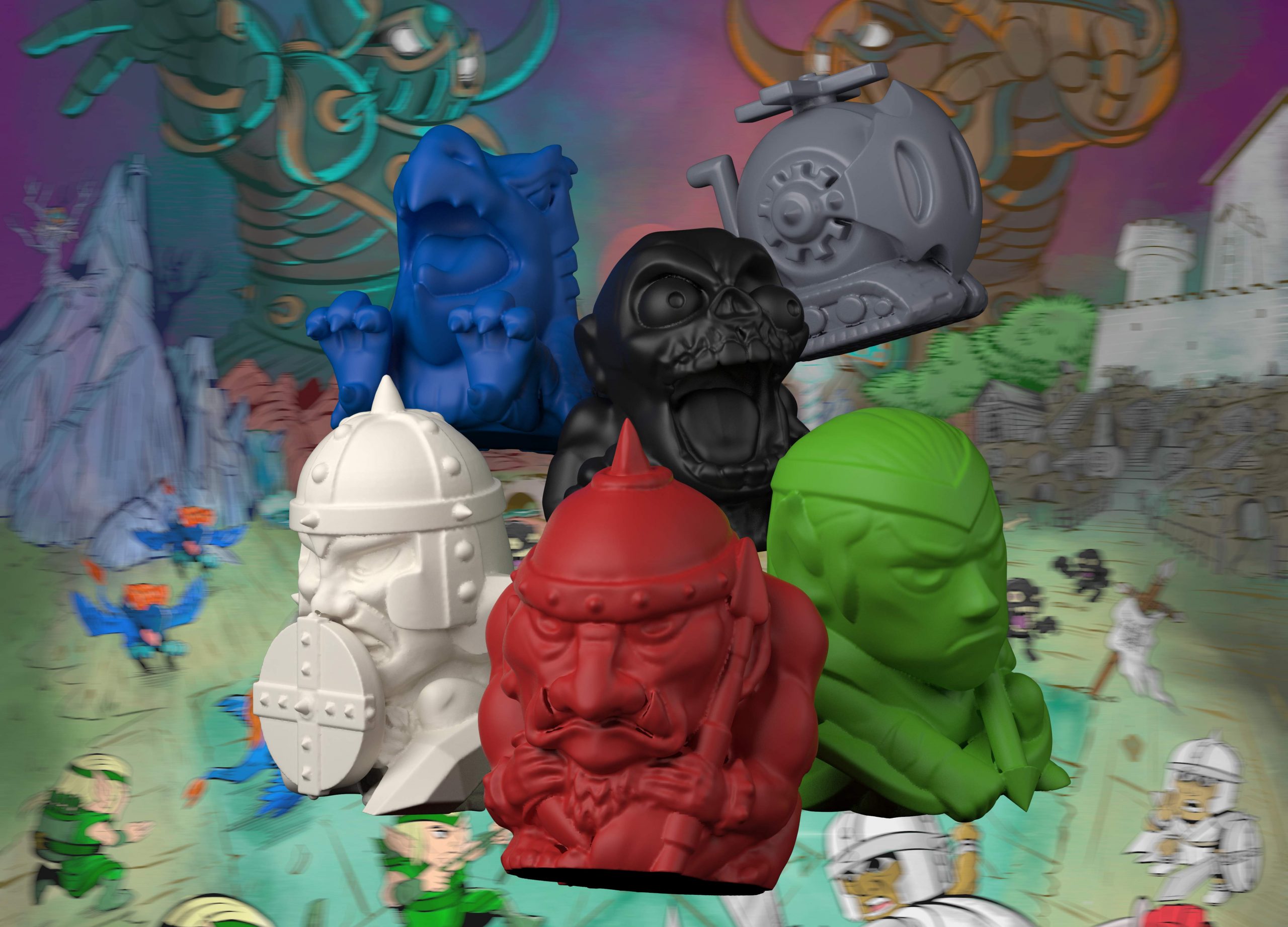 Created by John de Campos and the team at Terrible Games, Token Terrors: Battlegrounds is a 1v1 game that has been in development for more than three years. Enriched by robust lore and artwork created entirely by the Terrible Games team, Token Terrors is built on established gaming practices as well as innovative and exciting new mechanics, while also providing a series of detailed, sturdy miniatures made by Gameland Importing & Exporting Co., Ltd. with countless applications in other tabletop games. Through strategic choices, well-timed attacks and smart use of each Token, players will alternate commanding their forces and attempt to outmaneuver and outwit their opponent until one player destroys all of the other player’s Tokens, reigning victorious.

Egg Embry wrote comic book short stories, edited comic book series, wrote and drew a webcomic, and contributed to comic book journalism across the 2000s. Now, he buys the opportunity to write for a variety of tabletop role-playing games in the tradition of vanity press. NOTE: Articles may includes affiliate links. As a DriveThruRPG Affiliate/Amazon Associate/Humble Partner I earn from qualifying purchases.
View all posts by Egg Embry →
Tagged  Kickstarter, Token Terrors: An Uncontainable Gaming Experience.
Bookmark the permalink.