How Undead are You? 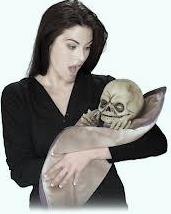 A Happy Quiz for Everyone…

How Undead are YOU!

To determine just exactly how foul, creeping, and unholy you are, answer the following questions and keep track of your score. A’s are worth 1 point, B’s worth 3 points, and C’s worth a rotten, festering 5 points. Check your undead-ness at the bottom of the quiz!

What part of every day appeals the most to you?

A. Dawn. You just love waking up to the sun beating down on the world, melting all the shadows away.

B. Evening. Perhaps you’re at home watching a movie, sipping wine, or barbequing up some delicious man-flesh. Either way, you’re content to watch the day die slowly.

C. Late, late, late at night. Everyone else is asleep. You’re awake at Waffle House, flirting with some wonderful creature…or maybe you’re out on the town, closing down establishments that never close.

Which movie is closest to your heart?

B. The Lost Boys. Bloodsucking, soul-gobbling vampires are awesome, but only if they’re cute and wear leather.

If you had to choose a song…?

A. Taylor Swift’s Shake it Off. Who needs country music when you can just market sexy, bouncy pop?

B. Anything by Creed. Seriously, if you pick this answer, stop taking this quiz and get help.

C. Slayer’s Seasons in the Abyss. Music for when the earth cracks open and everything dies.

When’s the last time you did anything meaningful outdoors? (Other than walk to and from your car)

A. Five minutes ago. Hell, you just did fifty pushups on the summit of Mount Doom.

B. Yesterday. You think you remember taking out the garbage. Or opening the door long enough to yell at the cat to come in.

C. More than two days ago. Sunshine hurts. I mean, oh gawd…you’ll burn away if you’re forced to put down the Xbox controller.

How often do you eat dinner at a restaurant? In the presence of the living? And no, Golden Corral and Waffle House do NOT count.

A. Two or more times every week. Because people-watching is just as fun as gorging on those orange biscuits Red Lobster makes.

B. Once per week. You’d go more often, but that’d require moving more.

C. Hardly ever. Pizza and a movie are way cooler.

How many times have you had sex this year? (With someone else)

A. One hundred or more times. Congratulations, you’re lying!

B. Between ten and ninety-nine times. Sorry, married dudes.

C. Zero to nine times. Because in order to have sex, you’d have to stop eating brains for at least three minutes.

Ever watched a movie at a movie theater alone?

A. No way. People who do that are either stalkers, serial killers, or both.

B. Considered it, but haven’t pulled the trigger. Because kids. Or spouses. Or friends. Or the latest collection of garbage Hollywood has heaped upon your world.

When confronted with hostility (in the form of frienemies, strangers, significant others, or Wal Mart employees) you…?

A. Take the high road. Your chin is held high, your ego intact, and your knuckles only slightly white.

B. Boil inside. But ultimately refrain from dismembering the hostile party…and all his/her friends.

C. Fists. And profanity. But if no violence, then at the very least you plot the annihilation of the offender’s entire bloodline.

How relentless are you?

A. Not very. You’re laid back. You brush failure off and move along to the next thing.

B. You’re a skeleton. If hacked into a hundred pieces, you slowly reassembly your parts and clickity-clack back to work.

C. You’re a vampire. Oceans of time can’t stop you. If told, ‘no‘ at every possible access point to your goal, you sit in a coffin outside and wait for everyone holding you back to die.

How intense are your dreams?

A. Moderate. You don’t dream much, and when you do it’s usually about falling, or sex, or money, or work. Or beer…

B. Creepy. You had night terrors once or twice. You swear you saw a ghost upon waking. You remember at least a handful of dreams that give you the chills.

C. Gravetastic. You dream and daydream terrible things. You’ve swam through rivers of blood, sat atop mountains of bones, fled from crimson-eyed spirits, and died thousands of times…only to rise again.

So about your score…

0-15 points – You’re safely mortal. Go back to your cubicle and keep a shotgun handy. Remember your cardio.

16-30 points – Your grandfather is probably a ghost. Your parents let you stay up to watch Evil Dead when you were five. But no…you’re still alive. Although graveyards are pretty cool. And your household pottery is haunted.

31-42 points – You’re clearly undead. Before going to work, you should probably make sure some of your skin isn’t falling off. Sleep isn’t sleep to you. It’s torpor, during which you regenerate your dark powers. How are you even able to read this, considering your eyeballs rotted out long ago?

43-50 points – In the caverns beneath your apartment, you collect skulls, mummies, and dolls that you’ve poked the eyes out of and sold to horror film directors. The sun hurts you…badly. Whenever you’re not alone, you’re spending time with others like you. And by others, I mean the team of thousand year-old ghouls you’ve assembled with the aim of global annihilation.

Look for more ridiculous quizzes in the future.