It’s the Most Wonderful Time of the Year

No, I’m not talking about Christmas… that’s still months away. No, I’m talking about that special week that only graces us once a year. That certain something which tells me summer still has about 1 solid month left. That week that informs me that I’ll always be a little scared to go back into the water. 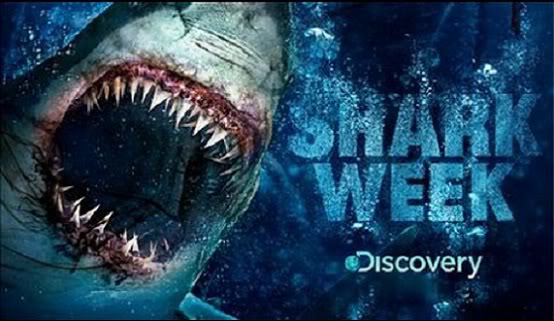 Next week I’ll begin filling my DVR up to the brim with any and everything shark related. And then, over the next month I’ll watch it in little pieces here and there (cause I know how to party, clearly).

I’ve said it before, but I truly believe that had I not seen Jaws I might have been a marine biologist. Maybe those were just the dreams of a ten-year old John, but I’m not so sure. I do know this, Jaws scared me more than any horror movie I’ve ever seen: because it changed my thinking of the ocean (it may be fitting that it is currently running in the other room as I write this).

My family goes to the beach every year. We have since I was about 13 or 14. Typically the beach of choice is Destin, FL, but it does change from time to time. The reason I bring this up is that my mom knows to find a place with a decent pool, because that is where I’d rather go swimming. Don’t get me wrong, I love sitting under an umbrella and feeling the salty breeze on my face, nose buried in some book. If that was my life every day for the rest of my life, I wouldn’t be too upset.

But to get into the water? I guess, if you force me to. And I’ll enjoy myself for a little while.

But always I wonder what is beneath me. What’s in the water that I cannot see? Where is that instrument of destruction that could tear me limb from limb? 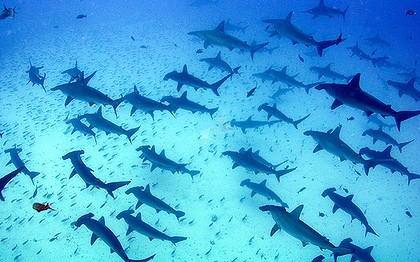 You may scoff. Say it is an irrational fear. You’re not entirely wrong. It is what it is.

So why, in the name of all that is sane, like shark week so much? Do I get some sort of sick joy from scaring myself mere weeks from when I might find myself face to face with one of them? I certainly don’t want to look into those black, “doll eyes”.

It is because I am fascinated by what they show. I am floored by the documentaries they put on each year. And yes, I know there are a fair number of repeats, but some of those I missed the first time around anyway.

Mostly, I think that kid inside me, who wanted to be a marine biologist all those years ago is exerting his will. Maybe if I had seen the Air Jaws doc instead of Jaws first… who knows?

1 – Jaws – Obviously. No brainer. The first, the best, and one of my top 5 all-time favorite movies. I’m amazed by the way we don’t see the damn shark for most of the movie. We see things from its perspective. We see the chaos it has wrought. But until it pops out of the water that first time (“You’re gonna need a bigger boat”). The end of the movie. The moment where father and son are at the dinner table and the kid is mimicing his father.

But more than anything it is the scene where Robert Shaw tells his story about the Indianapolis. That kills me every time. I get goose bumps just thinking about it.

2- Jaws II – Flawed, yes. But its biggest flaw is that Jaws I exists at all. You cannot compare yourself to one of the greatest films of all time. That’s just silly. The scene where the sailboats are tied together and the shark is hunting them. That’s just a cool scene.

3-Open Water – Not exactly a shark movie as much as it is a movie about being stuck in a bad situation… and then there are sharks later. This maybe my second worst nightmare put on the screen (the first being buried alive).

Actually this movie is horrible because why would you develop a smart shark? I get the study to help against Alzheimers, but why wouldn’t you make them without teeth or something. Everyone deserved their fates in this movie.

5- Sharknado – I mean, if by #5 I mean a train wreck that I can’t turn away from. At the time of this blog I have yet to see the Second One (that should have been called Electric Boogaloo), but I am sure it will be all sorts of awesome (and by awesome I mean really horrible).

Writer of comics and novels. In 2006 his first short story "The God That Failed" was published by Terminus Media in their debut comic Evolution Book 1. Since that time he has had stories published in Terminus Media's Evolution Book 2 and Evolution Special, Kenzer and Company's The Knights of the Dinner Table, and Four J Publishing's The Burner #3. Currently he is eagerly awaiting the digital publishing of his first creator-owned comic The Gilded Age #1 to be published online as well as his first novel The Dark That Follows later this year.
View all posts by John McGuire →
Tagged  jaws, John McGuire, shark week, television.
Bookmark the permalink.