J’s DadHacks – Made up games for the Single Father

A few weeks ago, I gave a shout out to my son (The G Man) for his skill in inventing new Lego bad guys.

This week I’m taking it a bit further.

We have a lot of free time, he and I. And we’re pretty much identical twins, him being 34 years younger notwithstanding. We find ourselves in constant need of self-entertainment. At all hours. TV isn’t allowed in the house. Nor are more than a tiny sampling of video games.

So what’s left to do? 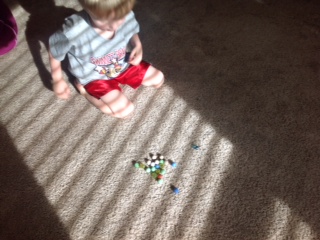 Cost – About $5 / Entertainment Value – Priceless. Plus your child learns all about collateral damage

So far the lil’ guy and I have logged approx. 7,421 hours playing this game. No shit. You need 21 marbles to play Marble Wars. Your kid puts ten in a straight line, and you do likewise. Make the lines parallel about 2′ from each other, and leave 2″ between each allied marble to make them harder to hit. To play, each player takes turns shooting the ‘bomb’ marble at his opponent’s line. Every time you hit an enemy marble (directly or via ricochet) remove it. Whoever nukes all of his opponent’s marbles first, wins. The catch: You can’t shoot from any closer than your own marble line, and you have to shoot from the ends of your own troops. 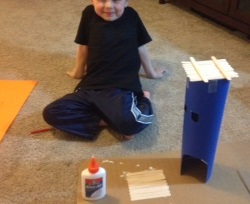 Junior said he wanted the $200 Lord of the Rings Lego Set. I said, “You can kiss my black ass.” Ok, no. I didn’t really say that. But seriously, he wanted a ‘realm’ in which his Legos could get together and knock the ever-loving hell out of each other. So we bought some multi-colored posterboard, curled it up into towers, laid the towers over a ‘floor’ of glued-down popsicle sticks, and stuck the whole damn thing atop a slab of cardboard. Now, whenever his Lego armies want to dismember one another, he uses our homemade castle as a battleground. He never even mentions the LOTR mega-set anymore. Except every other day. Twice. Forever. 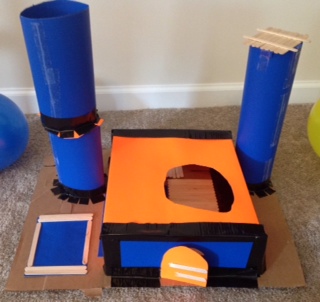 The finished product. Aka: The Hall of Infinite Death

It all started with:

“Dad, can I play Minecraft?”

“Ok. Go get your sword and some pillows.”

Like every child between 2 and 90, Junior loves him some Minecraft. Crushing green, phallus-like Creepers and digging down into the underworld is fun. Only problem is that it’s a video game. And after about 4% of one session of playing it, I decided, “Hell no. We’re not getting addicted to this crap.” So what to do? Well. Junior received a Minecraft foam sword over the holidays this year. So instead of annihilating pixels, we arrange pillows like Minecraft bricks. And he goes nuts. I mean, like…seriously aggro. He knocks down wave after wave of stacked pillows, couch cushions, and cats painted like Creepers (kidding). Then he builds it all up again. The true value of this game is…I never knew we had so many f’ing pillows. 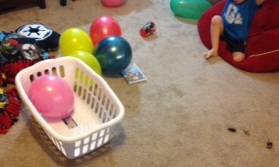 Cost – About $2.99 / Entertainment Value – Good for humans…better for cats

In a house packed with multiple kids and an angry, hormonal mom, this game would never work. Too messy. Too loud. But in a cavernous man-void occupied by a 40 year-old hermit and his son, it’s perfect. What you’ll need: 1 bag of balloons, 1 decent-sized laundry basket. How to play: Divide up the balloons by color into two equal-sized piles. Put the laundry basket in the room’s center. While sitting approx. 6′ from the basket, you and your lil’ one hurl balloons forth from your pile. The point is to get as many of your balloons into the basket as you can, while occasionally knocking your enemy’s (I mean adorable loin-spawn’s) out of the way. When all your balloon ammo is depleted, determine a winner by counting how many of each side’s balloons made it into the basket. This game is especially good for white people, since no jumping, running, or actual ball skills are required.

Caution: If your cats decide to play, the game will only last one or two rounds. 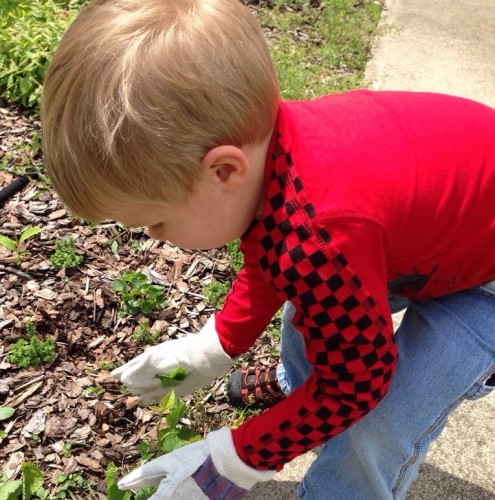 The rules: I offer the G Man one penny per weed pulled. He goes nuts and butchers hundreds of weeds while I do tequila shots on the porch. Relax. I’m kidding. (The shots are Jager.) Anyway, teaching work ethics and shit is cool, right? So is watching a five-year old commit genocide on all the crabgrass, clover, and poison ivy in your yard. Would I actually let him pull poison ivy? Sure. Though I’d probably offer two pennies for each vine.

See you next week.

Sink your teeth into my party-plundering coffee table series here.