It’s a strange thing to create a universe from the ground up. Gamers do it all the time without thinking twice about it. They love to explore lands never seen before. They want to introduce you to all manner of people and beasts. How man and machine interact. How man and magic are at odds.

So what other worlds have yet to be discovered? 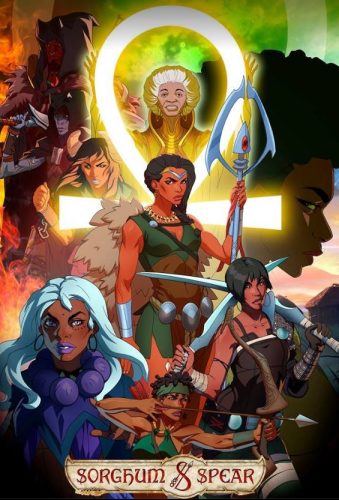 SORGHUM AND SPEAR is an African fantasy saga about young girls called to serve their people in a time of war during their ages of innocence. For a young farm girl named NAMAZZI who dreams of escaping the sleepy farm village of her birth, her life would be forever changed the day that monsters came there to find her.

SORGHUM AND SPEAR is centered around the lives and stories of a mythical race of warrior women, known as the AN’FRE, who fight against a legion of demons to protect a rare and ancient artifact known as the LIFESEED. Created and guided by a living goddess known as ESHE, THE ALL-MOTHER who wields the Lifeseed, they have found a rise in power of their foes known as the ABIKU.  The shifting tides of the FOREVER WAR now threatens to end their people, they call upon the last generation of girls to use their hidden powers and skills to save their world and their way of life. Each girl has their own voice and within the war’s final outcome, and their decisions will impact the fate of the ETERNAL REALM.

This is the second Kickstarter for Sorghum and Spear with the first one being for the very first issue. This one is much more adventurous as they are going for a three comic book-length graphic novel.

I was a contributor to the first Kickstarter (as well as an editor of sorts on the script – full disclosure). Even so, Dedren managed to create the entry point into a larger story with that initial tale that made me want to see how the world would open up. And if you’ve ever seen him at a convention, he always has so many prints of the characters… different interpretations of the heroes and villains of the stories. It’s almost as if his brain might explode without getting some of those ideas down. And I believe that is the kind of passion he has for the story itself. 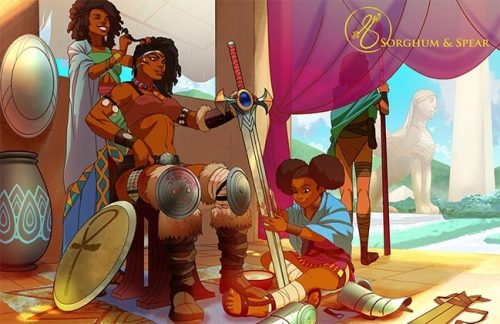 Preparing for Battle by Welinthon Nommo

There are a number of pledge levels that have some very unique rewards. Aside from the digital version ($10) or the Physical copy of the Graphic Novel ($30), you can help donate to the Ancholi Quarter in Uganda ($50). At $75 level you can get Ancient Coin Jewelry. While at $200 you get to be within the graphic novel.

And there are numerous others that I didn’t list, so do yourself a favor and scroll through the various options.

I’d be remiss if I didn’t mention that Nichelle Nichols was an Executive Producer on the project. I can’t wait for her to lend her talents to the animation.

The project is only a couple of days away from the end of its Kickstarter life and needs just over $2000 (at the time of this writing) to fully fund. If you check out the Kickstarter page, you can see that Dedren has plenty of guest artists on tap for potential alternate covers or new prints (or probably other things I’m overlooking). This is one of those projects where I believe that if enough eyeballs see it, there is no place to go but up. 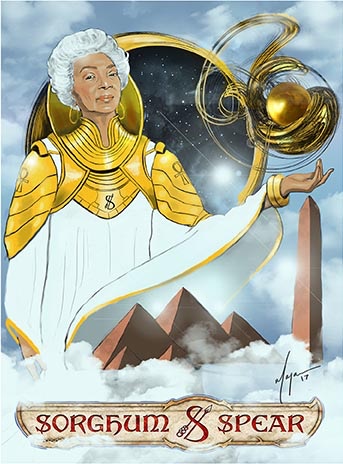 Eshe the All-Mother by Sheeba Maya

To find out more about Sorghum and Spear, check out the Kickstarter Page here.

Writer of comics and novels. In 2006 his first short story "The God That Failed" was published by Terminus Media in their debut comic Evolution Book 1. Since that time he has had stories published in Terminus Media's Evolution Book 2 and Evolution Special, Kenzer and Company's The Knights of the Dinner Table, and Four J Publishing's The Burner #3. Currently he is eagerly awaiting the digital publishing of his first creator-owned comic The Gilded Age #1 to be published online as well as his first novel The Dark That Follows later this year.
View all posts by John McGuire →
Tagged  John McGuire, Kickstart the Comic, Kickstarter, Sorghum and Spear.
Bookmark the permalink.