Kickstart the Comic – The Espresso Detective Comic No. 1 Print Campaign

Sometimes you need something with a little kick.

Sometimes you need someone who will go the distance for you.

And sometimes you just need… a Dick. 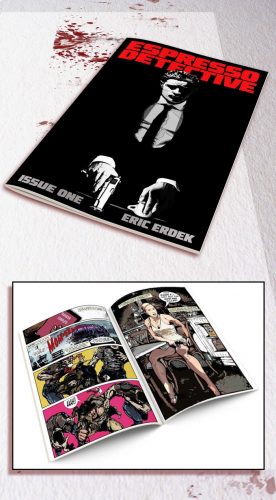 Slavers in your town. Your neighbors are their clients. Restaurants. Massage – stolen people. Only one man gives damn, and he’s a Dick.

His name is Caetano Sanchez, he’s named after Saint Cajetan, co-founder of the Theatines.

Famous for not owning property or asking for alms. Caetano mirrors his namesake since he seems to own nothing and yet is always seen in the coolest cars and pads. All borrowed… mostly from fallen enemies.

That’s where his saintliness ends. Soul-wrenching loss and heartbreak have made him a man that goes through women and friendships like a Saudi goes through bullets at a wedding (it’s called happy fire. Really, look it up).

Caetano seems to stumble victorious and unscathed from case to case saving the day like a trench-coated Jar Jar Binks. No skills or strategy other than planning how to get his next gorgeous client into bed. However, tearing at the edges of his happy-go-lucky facade is a much darker source to his powers.

Sanchez is addicted to Espresso mainly for self-medicating his MDD (Major Depression Disorder). He has also refined it to an art and a culture. His Nagula (Shaman Teacher) has made it so Sanchez has what appear as superpowers when he is buzzed on Espresso.

He’s a ladies man, a P.I., a Shaman’s apprentice and a savior of the weak and lost.

Literature has a new great Latin lover… and he’s a dick. 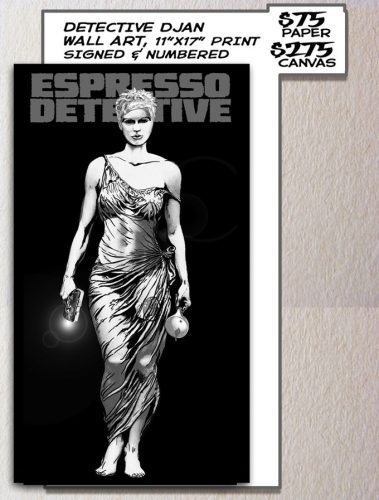 The whole Noir detective story is one that is either in your wheelhouse or not. The solo (mostly) guy who has to use his wits and maybe a bit of luck to not only arrive at the answer to whatever his current mystery might be but also juggle that with living the lifestyle of a P.I.

It’s both glamorous and utterly miserable at the same time… and in that juxtaposition is where you can get a great story. Whether it is about redemption or burying the past or whatever… we come for the tropes and trappings, but we stay for the stories. 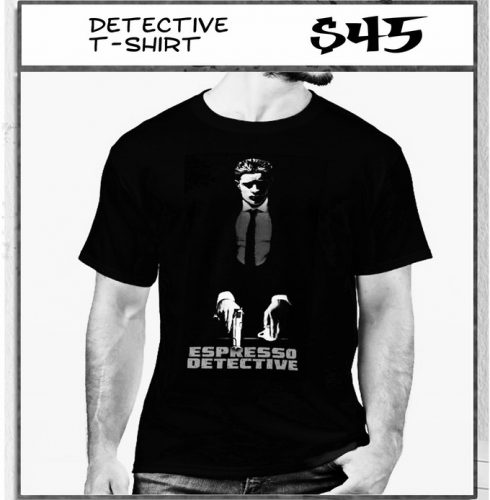 Normally the answer might be found at the bottom of a bottle of some darkish liquid. Something that will really knock you down and make you wonder who is in control of who. For this guy, it just happens to be Espresso that does the job…

And who are we to judge. So pick up the book and have a morning read with your coffee!

To find out more about The Espresso Detective, go to the website here.

Writer of comics and novels. In 2006 his first short story "The God That Failed" was published by Terminus Media in their debut comic Evolution Book 1. Since that time he has had stories published in Terminus Media's Evolution Book 2 and Evolution Special, Kenzer and Company's The Knights of the Dinner Table, and Four J Publishing's The Burner #3. Currently he is eagerly awaiting the digital publishing of his first creator-owned comic The Gilded Age #1 to be published online as well as his first novel The Dark That Follows later this year.
View all posts by John McGuire →
Tagged  Eric Erdek, Espresso Detective, John McGuire, Kickstart the Comic, Kickstarter, Noir.
Bookmark the permalink.