The way I pick comics for this blog is mostly random. I mean, sometimes I’m supporting a creator I know, but most of the time something about the project catches my eye. Then I read through the pitch, look at the artwork, and then do these write-ups. I never know when something will hit me just right and many times I go through the listings on Kickstarter and not find much of anything that appeals to me.

That was certainly not the case tonight. 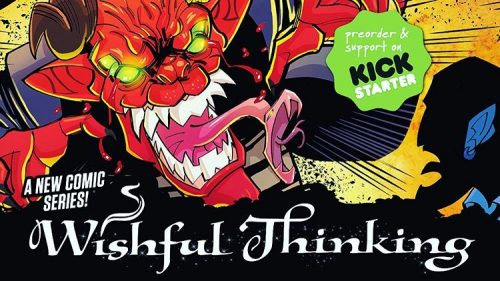 A comic about an ex genie who sets up shop as a Wish Consultant.

Wishful Thinking is set in a modern time where creatures of fantasy have taken the first steps in integrating into our world.  The only fantasy creature that has never called the mortal realm their home, is a djinn.  This, in turn, begs the question: “why is there a genie outside of his lamp running a wish consulting shop?”  Throughout the seven-issue series, you’ll get those answers and then some!

For now, let’s focus on a smaller picture.  What is this issue about?  With fantasy creatures becoming more popular, pentagrams are getting awfully more dangerous these days.  When Mary, a youth having trouble getting over a recent breakup, gets in a fight with her old lover’s new squeeze, she inadvertently summons a demon after a drop of blood lands on her favorite band’s poster.

Maybe it was the Genie starting his own business… maybe it was all those times I watched Aladin when I was younger… or maybe it is just unique enough to say to myself, “Self, you have never seen this particular idea, maybe give it a shot!”

I think it was probably a combination of all those things and then seeing the artwork which I think really works for me. It evokes a cartoony style which makes me almost think it could be animated right off the page. 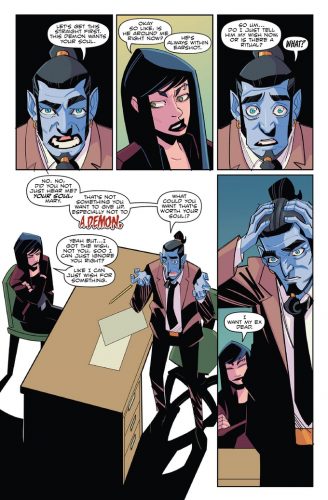 You can opt for the digital pdf only at $3 or a physical copy at $7. As you go up the scale there are options with art prints ($12) or a magnet ($20), but on the higher end ($50), you can get a variant cover “depicting how unfortunate your wish could turn out if you don’t have someone like Jum looking out for ya”. Which is an extremely cool idea for a pledge level. There are only 2 available currently.

This one has a very short turn around time as there is only 4 days left in the campaign (I’m honestly sorry I didn’t see this a week ago). Hopefully, my little signal boost can help in some way. Jack is only about $142 away from having this fund. Plus, the issue is done, so you’ll get any digital copies right after the campaign is over. 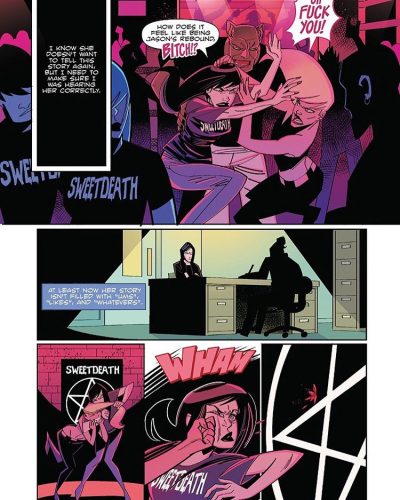 To find out more about Wishful Thinking #1, check out the Kickstarter Page here.

Writer of comics and novels. In 2006 his first short story "The God That Failed" was published by Terminus Media in their debut comic Evolution Book 1. Since that time he has had stories published in Terminus Media's Evolution Book 2 and Evolution Special, Kenzer and Company's The Knights of the Dinner Table, and Four J Publishing's The Burner #3. Currently he is eagerly awaiting the digital publishing of his first creator-owned comic The Gilded Age #1 to be published online as well as his first novel The Dark That Follows later this year.
View all posts by John McGuire →
Tagged  Carlos Trigo, Ester Salguero, Jack Raines, John McGuire, Kickstart the Comic, Kickstarter, Letter Squids, Wishful Thinking.
Bookmark the permalink.