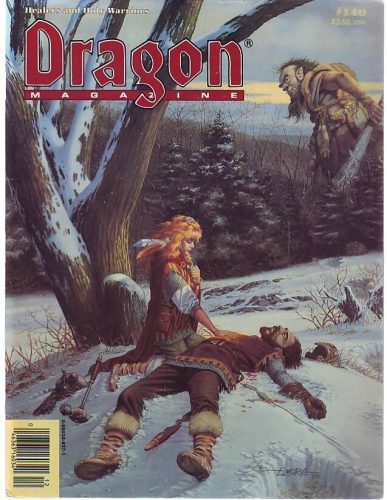 At the beginning of last year, I was body-snatched and convinced that doing something for the Kickstarter Zine promotion was a good idea by Egg Embry (of this very site among many others). Actually, it was an opportunity to dip my toe into the Roleplaying world that I’ve often thought about over the years. In fact, if you go all the way back to high school, the very first thing I ever submitted to anything was to Dragon Magazine, which was THE Dungeons and Dragons magazine. I read it every month. Anytime my parents happened by a bookstore, I’d search for the latest issue and read and reread them until the covers fell off (literally in some cases).

For those who may not know, Dragon would contain articles about the game. Sometimes this came in the form of how-to-play certain situations that might make an appearance in the game. Other times it was additional weapons or spells that your character might be able to gain access to in your own campaign.

It was in that vein that I decided to make one of my senior independent study class’s goals to write and submit an article to Dragon Magazine.

Now, that class was the biggest blow-off class (I’ll need a whole other post to talk about the goings-on in that class over the course of a year) and a perfect thing for my senior year. But this was something I was passionate about. I spent time crafting my article, which focused on a series of magic spells inspired by one of my characters. Without getting too much in the weeds, I thought the spells had promise and offered a different way to play the game.

Sadly, I received a rejection piece as my response (which I still have upstairs somewhere). And while I wasn’t crushed or anything, I was disappointed. It certainly felt like the ability to get anything potentially published was beyond a longshot.

(Later, after a few years passed, I stumbled upon the file and realized immediately why it had been rejected. There just wasn’t enough meat.) 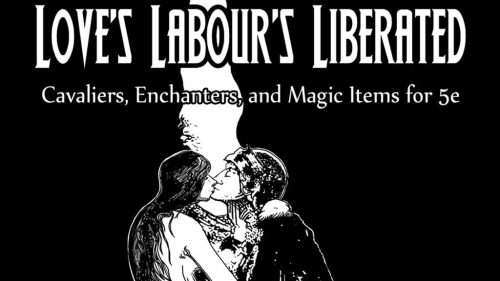 Which brings me to last year’s Kickstarter: Love’s Labour Liberated. It was a 5th Edition Dungeons and Dragons focused Zine around the idea of Chivalry and Enchantment… Love would guide us.

They say that every campaign you run, you should look to learn from. They also say (whoever “they” might be) that it is easier to learn from your failures than your successes. When I ran the Gilded Age Kickstarter, I was definitely learning on the fly. But overall, I was happy with the way the campaign went. The bigger problems came in dealing with the printers and the end of the year holidays. With Liberated, there were a number of things I’ve learned:

Have a clear assignment of roles and duties in regard to the project.

With comics, I’m the writer. I know what it is I’m supposed to be doing. With the Zine, we had 3 writers and once the other 2 had called “dibs” on a couple of things, I was left wondering how best to contribute to the Zine. We all kinda had a “we’ll figure it out as we go along”, but I believe that only caused us to delay things needing to be done.

Have milestones set up for the project even as you are crafting the Kickstarter.

We had our big due date for sending the finished product out (about 5 months), but we didn’t sit down and break down exactly how long we might need for a particular task. This meant that there wasn’t much in the way of check-ins by any of us… which led to the approaching deadline and not nearly enough done on things.

Just because you have time, doesn’t mean you have all the time.

This ties into the above. I think we all thought that 5 months was more than enough time to get everything done. Heck, between the 3 of us, that will be extra time. Maybe we’ll get this thing done early. Yeah, about that.

Not saying that anyone should look to be late in delivering their projects, but I think Egg has done a decent job of keeping the backers updated. We’ve had a couple of hiccups here and there, but generally the backers get an update every 2 weeks. Sadly, for a long while, most of the updates were “we’re working on it, but we’re behind”.

This is more a personal one, but I think I want to have the Thing completely done before doing my next Kickstarter. There is a stress level that builds the later things go, and I know that with Gilded Age, that part wasn’t as much a concern. The only thing I had left to do was the overall layout and get the book printed. For my next comic Kickstarter, I’m going to basically send to the printers as soon as the thing ends. No delays!

We’re in the process of finishing the Liberated Zine project up. Last week we sent out an artless draft – basically all the meat of the new “stuff”, but not prettied up. This past weekend I mocked up the Zine and would legitimately say we’re 95% done. And I’m very proud of the work we all put into it. I think it will be a good representation of our work.

It just took a bit longer than we would have liked.

Writer of comics and novels. In 2006 his first short story "The God That Failed" was published by Terminus Media in their debut comic Evolution Book 1. Since that time he has had stories published in Terminus Media's Evolution Book 2 and Evolution Special, Kenzer and Company's The Knights of the Dinner Table, and Four J Publishing's The Burner #3. Currently he is eagerly awaiting the digital publishing of his first creator-owned comic The Gilded Age #1 to be published online as well as his first novel The Dark That Follows later this year.
View all posts by John McGuire →
Tagged  Dragon Magazine, John McGuire, Kickstarter, Love's Labours' Liberated.
Bookmark the permalink.