Kim Frandsen: The Bard of Keeping It Classy

My former editor on the Open Gaming Network, fellow journalist on d20 Radio, and RPG pal, Kim Frandsen, did a book for the DMsGuild, Keeping it Classy: The Barbarian, that flew off the digital shelf. We did an interview about it if you’re interested. Now he’s back with Keeping It Classy: The Bard so I caught up with him to talk about his newest book. 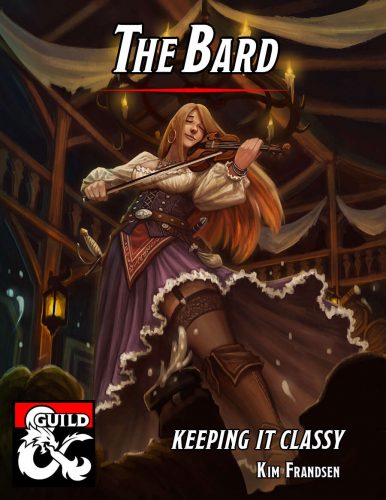 EGG EMBRY (EGG): Kim, we talked before about your prior project, Keeping it Classy: The Barbarian, just a few months ago. You’re back with the next in your Dungeons & Dragons 5e series, Keeping It Classy: The Bard. Can you pitch me the book?

KIM: I always found bards to get the short end of the stick, and a bit of a bad reputation. Sure, some of them will seduce anything with a pulse (and a lot of things without one), but it really is playing into the stereotype. They’re a face and support style character – they don’t have the flamboyance of a raging Barbarian or a fireball-throwing Wizard, but they have a very distinct “feel” when you play them as something other than a seduction-machine. It’s not the most popular class in the world either. Apart from myself, I only actually know a single person who’s played a bard – or at least only one who’s ever told me. 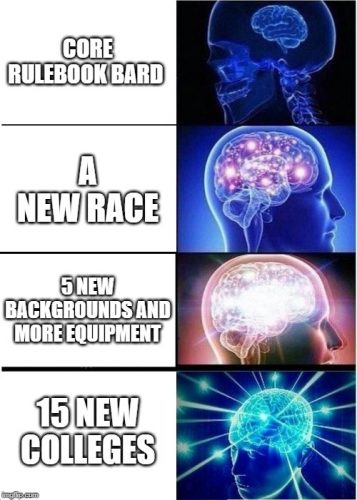 EGG: Of your new Bard Colleges, what are the top 3?

KIM: I wouldn’t say there’s a Top 3 as such, but the 3 that stand out to me are the College of Life – as it enables you to play a more effective healer than you would normally as a bard. It takes the idea of the “old wise village dweller” to the logical conclusion. Then there’s the College of Death – it allows you to create a type of assassin. When I was writing that one, I kept getting Milady de Winter from the Three Musketeers popping into my head – seductive, persuasive and undeniably deadly. Finally, there’s the College of the Silver Voice – my version of the Pied Piper of Hamelin. You want to convince someone to do something: That college is your best bet. 😊

EGG: Any new monsters? Or a new race to play?

KIM: No – Not unless you count the college of discord. The tunes that thing can turn out ARE monstrous.

There is a new race for this book as well, just like I expect there will be for the other books. 🙂 The windsingers in this book were inspired in part by actual birds (from a walk I had in my local forest, where it sounded like the birds were having a conversation [well, argument really]), and the avariel elves (if you don’t know them – look them up. Winged elves) – and also by the fact that there only seems to be one flying race. So I combined the idea of this ability to fly and the love of music into a race – one well suited for the bard class. 🙂

EGG: Are all of these your words or is anyone helping you on this one?

KIM: These are all my own. I had a single archetype in the Barbarian book by Rodney Sloan, but this time around all of it is mine. And it is all new. 😊

EGG: What “new” memes did you create for this one?

KIM: There were a few.

EGG: So, dropped it on July 5th, the day after America’s Independence Day, did ya? How’d the holiday impact your roll out?

KIM: Yes I did. And in hindsight, I probably shouldn’t have. Noted down as a lesson learned. Since I don’t live in the US, I completely forgot about it. To me it was a normal Friday, but it seems like a lot of the US had the day off. Whether it’s due to the Bard being less popular than the Barbarian or not, I don’t know, but the response has been a lot slower in coming.

EGG: Keeping it Classy: The Barbarian did some great numbers. How has it performed?

KIM: It has hit GOLD on the DMsGuild – and it did so in about a month. I couldn’t be happier with that. 😊 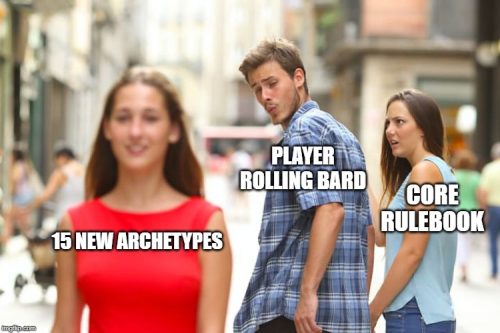 EGG: Are you planning to keep every 5e class classy?

KIM: Short answer: Yep. 😊 Long answer: Yes, but each book does take time to write. Now I have ideas for all of them, but I don’t accept just anything into them. Each book takes about a month to research and write (and rewrite) and another month for editing, layout and cover to come together. So next up is cleric, and I’m 90% or so through the brainstorm for it. For those curious, next up is Cleric. (I like to keep things alphabetical. 😛 )

EGG: Where can fans find out more about you and your books?

KIM: Well, I do a blog on the d20 Radio network every Friday. That admittedly is mostly Pathfinder, at least currently, but lately I’ve been working on locations and encounters based off Magic cards, and they can be used for any system. People looking to find my books can find them on DriveThruRPG and DMsGuild.

Egg Embry is a participant in the OneBookShelf Affiliate Program, an affiliate advertising program designed to provide a means for sites to earn advertising fees by advertising and linking to DriveThruRPG.

Egg Embry wrote comic book short stories, edited comic book series, wrote and drew a webcomic, and contributed to comic book journalism across the 2000s. Now, he buys the opportunity to write for a variety of tabletop role-playing games in the tradition of vanity press. NOTE: Articles may includes affiliate links. As a DriveThruRPG Affiliate/Amazon Associate/Humble Partner I earn from qualifying purchases.
View all posts by Egg Embry →
Tagged  DMsGuild, Keeping It Classy: The Bard, Kim Frandsen.
Bookmark the permalink.