The Lord of Infinity – A Creative Interview with Dylan Kinnett

This week’s interview is with Dylan Kinnett. He’s a Baltimore denizen and creative writer extraordinaire, and his visit is special for the Tessera Guild. The reason: Dylan is the taller, younger, and better looking brother to J Edward Neill (yep, that’s me.) I was first introduced to Dylan’s fascinating style of writing in his original release of Infinity’s Kitchen. And now that he’s gone global, he’s up next in our ongoing Creative Interview series.

So let’s get started!

Hey there, latest Tessera victim. Tell us about yourself, where you’re from, and what you love:

Hi, my name is Dylan Kinnett. I’m from Baltimore, Maryland. I’m not originally from Baltimore, but I wonder: after spending 10 years in a place, do you become “from” that place? What does it really mean to be “from” a place, anyway? Does it just mean that you live there, that you’re proud to live there? In any case, the place where you live is part of who you are. Despite whatever repetitive loop you may have seen on cable TV lately, Baltimore is a charming place to be, and I love it here.

In layman’s terms, describe your unique style of writing:

That’s a difficult question because the layman’s terms aren’t particularly accurate for what I’ve been writing lately. If you ask a layman what “poetry” means, they’ll probably describe rhyme, meter, rhythm, and they may go on to say that it’s supposed to be about romantic themes and imagery. I’m trying to avoid all that, and to write something else, something new. I’ve discovered that the laymen are actually quite open to these new things, so long as I don’t use too many confusing old words for those things. Is it poetry? Sure, but I don’t go out of my way to call it that. In general, I’m just trying to do new things. I also like to write short plays, stories, and I dabble in performance art.

Please describe for us your fascinating new release, Litanies and Reiterations:

Litanies and Reiterations is a chapbook, which is a small book of writings. The works within the chapbook got their start as a collection of commonplace phrases. I’d find the phrases in everyday conversation, in song lyrics, blog comments, and catalogs: all over the place, really. Then, I worked the phrases into some writings that are repetitive, reiterative, or chant-like, and that’s what the title is about. One of the pieces, for example, is about how often politicians talk about the world and their work in four-year increments, and about how arbitrary and absurd it is to think about the world that way. Another one makes fun of how many love songs are on the air. It’s a playfully sarcastic little book.

Talk about Infinity’s Kitchen and the interesting things readers might find therein:

Infinity’s Kitchen is a literary journal that I started a few years ago that has grown into a quarterly reading series as well. As the editor, I’m looking to feature works that are somehow the product of an interesting new recipe. In order to contribute to the publication, its website or reading series, authors and artists are asked to answer a question: what is experimental about your creative work or process? The word “experimental” is a difficult one; some examples might help. Some of the interesting things we’ve published include a film and pirate radio project, poems made with Jello letters, and a reading from gigantic broadsheet printings revived from the 18th century. 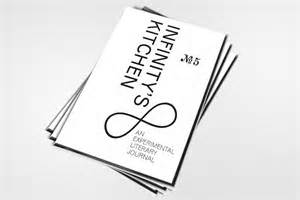 Do you have an ultimate artistic goal you’re pursuing?

Yes, but I don’t know what it is yet. I’ll create something, it doesn’t reach the goal, so I keep creating.

Creatively speaking, what’s next for you?

I’m on vacation this week, but I do hope to finish writing a ten-minute play that I’m working on. The play is a follow-up to a morbid parody about astronauts that was performed a few years ago, but I’m finding that to be a tough act to follow.

It’s a real treat to have a talent like Dylan stop by, and it’s especially neat to encounter his awesome style of artistic expression. Here’s a few more Dylan-related tidbits and links for you to devour:

His latest release, Litanies and Reiterations, available in paperback and in e-book formats from Apple and Amazon.

Thanks again to Dylan for stopping by!

Everyone stay tuned for the next Creative Interview!