Makepeace Really is my Name

Hi there. Welcome to Tessera! I’m the artist of this creative guild, the one with the really cool last name. Makepeace isn’t my birth name, but it is by far the best surname I’ve ever had and let’s face it, I should have been born with this name. A week doesn’t go by when I haven’t received a comment about it’s validity or origin. I’ve almost got the spiel down: “Yes, that really is my name. It’s great isn’t it? I can’t take credit though, it was my ex’s name. It’s an old Quaker name. No, I’d never change it!” In all seriousness, it does suit me. I’ve had a passion for art and nature for as long as I can remember. Many of my fondest memories involve the outdoors–one of them is the photo to the right. You can still find me wandering the woods today, collecting feathers, stones and other odd bits of nature. My studio is full of a my collection.

Quite often, bits of my collection end up in my art, but once my imagination has a say you never know what you’re going to get. I am an avid reader of Science Fiction and Fantasy, with some horror on the side. Movies? Same genres. Television? Same genres. I do read (and watch) outside of those realms, but anything from the Avengers to Middle Earth will take precedent over a thriller. Don’t get me started on music. You probably wouldn’t believe how far my tastes swing (Classical to Linkin Park).

I’m also, as was pointed out earlier in the week, a Web-Warrior Princess. Technology doesn’t scare me. If you were to look at the testing they do in schools, my highest ranked subjects were the Humanities and Science. My favorite courses at university were Comparative Literature and Human Osteology. I love both, just another example of my broad interests and skills. I can create with a paint brush (both digital and physical) and I can create with HTML, CSS, and PHP.

I guess all of this combined makes me a tree-hugging geek with a wild imagination. I’m cool with that.

What does this mean for you readers of Tessera? Well. I’ll be sharing a lot of art, some of my process as it applies to creating art for a story, things that inspire me, photos from conventions (I’m going to one this weekend!), books on my nightstand (and comics too), and so much more. I’ll even share a story or two of my own. I don’t think of myself as a writer–I think about art and painting far more–but I do write the occasional piece of flash fiction. I might also occasionally share a flashback from the movies, stories, images and events of my childhood that shaped who I am today. The possibilities are endless.

1. My favorite things to draw as a young teen? Horses and Xenomorphs. Not together, but that would have been cool too!

2. My favorite things to paint nowadays? Birds and Faces. 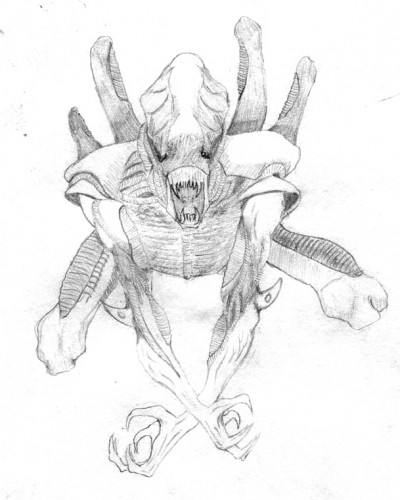 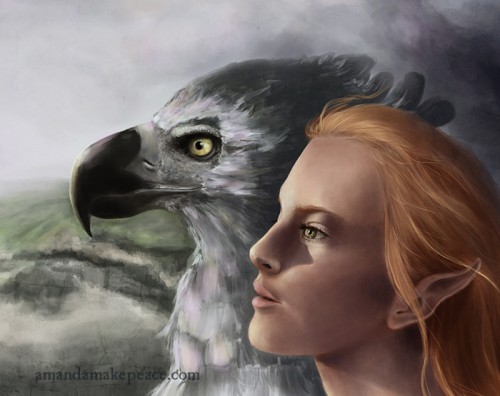 3. Artists I listen to the most on my iPod? Bon Iver, Florence + The Machine, The Glitch Mob, Cry Monster Cry, Imagine Dragons, Of Monsters and Men and Lindsey Stirling.

4. What did I want to be when I grew up? It changed quite a few times. High on the list: Geologist, Marine Biologist, Forensic Anthropologist, and of course an artist and writer.

5. First and last comic I bought? First was Aliens: Earth War (Dark Horse) and the last I bought was Infinity: Part Three (Marvel).

Amanda Makepeace is an award winning illustrator inspired by nature, mythology, magical beings, and distant worlds. She is the co-founder of the Bird Whisperer Project, a monthly art challenge focused on spreading the the love of birds and art making for everyone. Her art has appeared in ENnie award-winning games and on the covers popular independant novels and anthologies. Her latest project is the cover art for the Long List Anthology Volume 4, a book featuring Hugo nominated stories. Amanda is a regular at Fantasy and SciFi conventions in the southeast, and an award winner at JordanCon, DragonCon, ChattaCon, and LibertyCon. http://www.amandamakepeace.com
View all posts by Amanda Makepeace →
Tagged  Amanda Makepeace, artist, makepeaceart.
Bookmark the permalink.