I recently bumbled and stumbled across a number of ‘honest alternative movie descriptions.’ You’ve probably seen these. They’re movies looked at from a brutally honest, non-family friendly perspective. They’re pretty funny…mostly. In case you haven’t seen any, here’s a small sample of other articles’ work:

Home Alone – Neglectful parents go on holiday but leave their unhinged, sociopathic son at home to entertain himself, which he does by mutilating petty criminals. *

Gladiator – After a successful campaign annihilating free people, a Roman warmonger (played by Hollywood warmonger Russell Crowe) is enslaved but makes the most of it by killing fellow prisoners on his quest to commit history’s most public regicide. *

These were fairly funny.

But they got me thinking.

I can do this better. Or at least cruder…

(Yeah, there are a few spoilers.)

Hunger Games – Mockingjay – Well-dressed terrorist uses a bow and arrow to promote anarchy and attempt multiple assassinations. She then succeeds at getting the first black woman president elected.

Gone Girl – Having somewhat subdued his Boston accent, a slow-witted cheating husband chases down the woman he betrayed in order to continue living a hollow, unhappy life with her.

American Sniper – A gifted killer travels to a faraway land to slaughter freedom fighters from a rooftop. 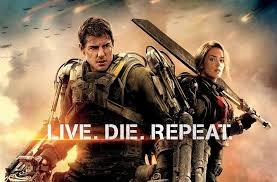 Edge of Tomorrow – In a blatant remake of Groundhog Day, an asshole becomes a better man by forcing himself to relive at least two-hundred days with a stunningly beautiful woman. Meanwhile, the woman insists on using a giant sword instead of a gun.

Mad Max – Fury Road – A speech-impaired drifter helps a truck driver kidnap and endanger five women who happen to be Australia’s only hope for having normal, healthy babies.

The Hobbit – Battle of Five Armies – A stoner gathers thirteen dwarves and a thief to burglarize their own mountain and sacrifice their lives for a cause he reveals only to tall people.

Maleficent – An angry faerie seduces an asshole and casts spells his on daughter, thereby perpetuating war between normal people and ambulant trees.

Whiplash – The guy from the Farmer’s Insurance commercials starts bodybuilding in order to intimidate young musicians. His latest target, a petulant boy who hates beautiful women, decides that the best way to impress his new teacher is to practice so hard his hands no longer function.

The Wolf of Wall Street – A movie centered around mocking American greed is absorbed by its target audience wholly and without any sense of irony. But the parties are epic and Margot Robbie gets nude…so it’s all good.

Terminator Genisys – A robot built to live thousands of years begins to age poorly after just a few decades. Is once again sent through time without any decent weapons to stop an ultimate killing machine.

The Imitation Game – A socially inept cryptologist decides he hates people so much he’s going to help them win a war.

Star Wars – The Force Awakens – A young woman teams up with a janitor to steal a spaceship, ignite a violent insurgency, and lead a galactic hero to his death. Meanwhile, a bearded man who killed his dad plays a pointless game of hide-and-seek with the entire universe.

If sarcasm’s not your thing, get serious here.

If sarcasm IS your thing, you might wanna read this.