Not A Review – A Quiet Place 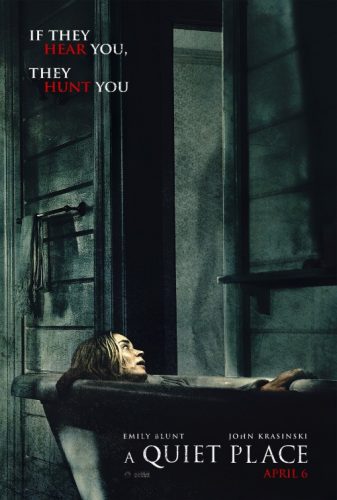 Because I have not seen this movie yet.

Yes, it is a strange thing to write about a movie without having seen it. But I have a reason for doing so… you see, this movie has already invaded my dreams.

This past weekend I had one dream from the time I closed my eyes until the time I woke up where I was in the world of A Quiet Place.

Now, without seeing the movie, the only thing my subconscious would have been able to glean was from what we see in the trailers themselves. And there is clearly something about it. I’m not sure if it is the premise: being hunted by things that rely on sound to find you. It might have been the spooky score they play during the trailer. Or it could even be the narrator, his low, gravelly voice breaking through my tv screen in order to make the hairs on my arms stand up. I wish I could know exactly what it was that set this dream in motion.

I think I’m lucky that I have pretty vivid dreams in full color. And most of the time even if I’m the main character of a dream, I’m somehow watching myself from behind the camera.

My dream version of the movie was pretty good (with a bit of strange dream logic, but I’ll let that slide). Very post-apocalyptic. In this, I was a part of a smallish group (maybe 12 people total) moving through the outskirts of where the suburbs end and the farmlands of Georgia begin. Where you get the occasional subdivision but can also not see a house for miles. We were the last ones in the area, somehow finding our way through the initial attack.

It was long stretches of walking, of waiting, of deeply disturbing moments when the sun had set and the little bit of whispering would happen. Everyone needing a small amount of connection with those they were surviving with, but not daring to go too far without there being any other thing that could possibly keep the monsters from hearing us, from tracking us to our lair. There were planned ambushes and being forced to leave people behind due to injuries, but…

It was the feeling that I remembered more than anything else. Thinking about it in the morning, it was clearly the feel I got watching the trailer. That no matter what, basic human nature dictates that we need to interact with others. That we need to be able to communicate. That sheer fear as one of them stalks you.

Normally these types of dreams would happen after I’d seen the movie, but this came before that. It became a movie that was obviously already on my radar before that night and now I’m just wondering if it will actually be too scary for my wife to want to see it or not.

Sometimes I let my dreams help me work out a story problem. Sometimes I go along for a ride I might never actually be able to do. I’ve jotted down ideas from dreams – fresh from waking up – but that feeling while they actually are happening can’t be duplicated. That dream logic will kick in and suddenly everyone is on scooters when we are traveling down a busy interstate. That feeling just can’t be recaptured in the same way because I don’t have the right foundation. So I wonder how it is going to be to actually watch the movie. Will it live up to my version? From everything I’m seeing on Facebook and from friends who went to see it – I think mine is going to be a very pale imitation.

Maybe in my head canon I can claim my idea takes place before the movie itself?

Writer of comics and novels. In 2006 his first short story "The God That Failed" was published by Terminus Media in their debut comic Evolution Book 1. Since that time he has had stories published in Terminus Media's Evolution Book 2 and Evolution Special, Kenzer and Company's The Knights of the Dinner Table, and Four J Publishing's The Burner #3. Currently he is eagerly awaiting the digital publishing of his first creator-owned comic The Gilded Age #1 to be published online as well as his first novel The Dark That Follows later this year.
View all posts by John McGuire →
Tagged  A Quiet Place, dreams, John McGuire, The Not Review.
Bookmark the permalink.