3 Sci-fi RPG Kickstarters You Should Back – Psionics Guide for Starfinder, FROM BEYOND:DESCENT, and Battlecruiser Alamo

Sci-fi space opera RPGs on Kickstarter is what I look at this week. Two for the Starfinder system and one for the Era d10 rule set. All are amazing looking additions to any gaming table.

“A psionics ruleset for the Starfinder RPG from Paizo by Dreamscarred Press, giving you new races, classes, feats and items!

Unlock your mental abilities in the Starfinder RPG from Paizo with the Psionics Guide! This new book from Dreamscarred Press will provide everything you need to use psionic powers in your Starfinder RPG campaign.

The Psionics Guide will include the following material to expand your options in a Science Fantasy campaign:

When Starfinder launched, space ships (obviously), magical cybernetics, and psionics were the aspects I felt would distinguish this franchise from its progenitor. To me, psionics feel so sci-fi that it’s almost a prerequisite… In this case, it’ll be a great addition to Starfinder. That said, the lack of psionics in SF is an oversight that Dreamscarred Press is correcting here. Really delving into psionics is the right call and I expect it to be a good 3PP product.

In case you recognize their sample cover mock up, it’s because it uses the same image as Legacy: Life Among the Ruins 2nd Edition. That is not to say anything is wrong with that (the reasons for the same cover are myriad and they announce “Sample mock-up cover, not intended to be final cover” so I don’t believe both products will have the same final cover), it’s just a beautiful image and, I hope, it speaks to the excellence of the finalized cover.

“The second of six Starfinder RPG compatible adventures, a mystery to add to your game or create a new one.” 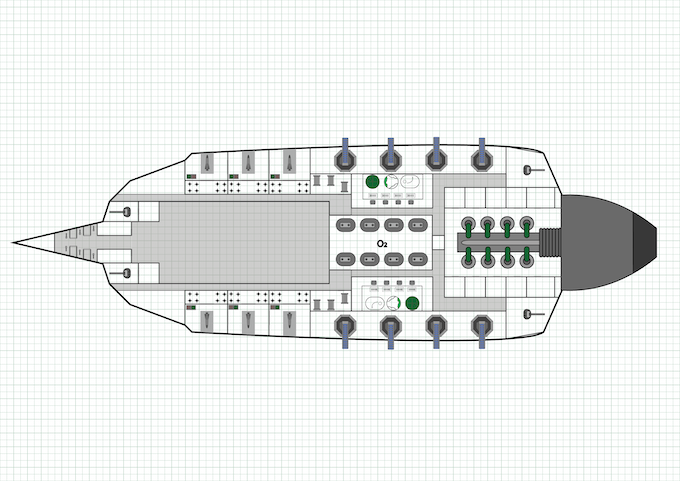 If the goal is reached the funds will go towards paying for artwork and editing as well. The module is made of 76 pages, around 25,000 words and five chapters.

The subroutine has made its second move. The second episode of this adventure path will see the PCs fighting to save the station from destruction, taking them to the surface of one of the planet that form the star system. They have to travel unnoticed and manually land. Will their ship, the Sawshark, endure the harsh planet atmosphere ? Will the PCs survive to what they’ll find out there ? They won’t be alone in this mission. If successful or not, will be up to you.

The PDF is ready to go and will be delivered when the project concludes. This adventure is the second episode of the FROM BEYOND adventure path. The adventure itself can be a scene in any existing game or be ran as a one shot without the setting detail making it versatile for improv GMs as well! A campaign setting will follow, with this adventure path being an introduction.

– the Expert NPC class, which introduce the concept of NPC as permanent crewmember together with the possibility of level advancement and XP award.

– 2 Pathfinder Legacy races converted fro Starfinder. The hobgoblin and the duergar. Both races have been revised adding some specific racial traits.”

I looked at Davide Tramma’s prior Starfinder Kickstarter, From Beyond: Distress Call, here. This Kickstarter is for part two in the series, proving he’s moving right along with the larger narrative. It’s well worth checking this out as he grows this sci-fi journey.

“For the first time, play in Richard Tongue’s expansive and exciting Sci-Fi universe – explore space for the Triplanetary Confederation!

“For a century, man has had the keys to unlock the universe. Our generation is privileged to be the one that opens the door. To finally realise the greatest dream of all, to touch the face of eternity itself. To reach the frontiers of our knowledge and to see what lies beyond.”
– Commencement Address, Triplanetary Fleet Academy, 2169

We are running this Kickstarter to help fund more of the amazing artwork that the readers of the book are used to. The Core Rulebook is a high quality, 220-page, full colour guide to the universe.

Written by Richard Tongue himself, and Ed Jowett (the creator of the Era d10 Rule Set) with artwork by Keith Draws (the cover artist for the series of books), this authentic and evocative book features not only everything you need to learn about the universe for the first time, but also some amazing new revelations which haven’t yet been included in the novels…

Powered by the critically-acclaimed Era d10 Rule Set, also seen in Era: The Consortium, Era: Lyres and Era: The Empowered, this game runs smoothly on a system originally designed to cater to science fiction!

Board your ship and secure for hendecaspace… you have some exploring to do!

Escaping a shattered Earth, millions of desperate refugees fled to the depths of the Solar System: to Mars, to Callisto, to distant Titan.

They built new homes, new worlds, but were unable to break the shackles of their increasingly tyrannical homeworld.

Finally, after decades of fighting, the colonies seceded, and the Triplanetary Confederation was born. It was an alliance forged in fire and tempered in the cold astropolitical reality of the post-war universe. The three worlds now work together, though sometimes uncomfortably, tied by their common goals for survival and self-determination.

There are many both within and without the alliance that would see it torn asunder, but more who will fight to the last to see it work, to keep the last flames of freedom alive…

Want to know more? Check out the Battlecruiser Alamo website!

It is based entirely on the events within the novel series, and features details on factions, locations and individuals who you might encounter. It is intended to provide a framework to allow you to go off in your own direction, exploring your own part of space, while still very much existing in the same universe as the events in the novels.

The book also includes a complete guide to character creation, the game’s rules, a selection of equipment to choose from and a large number of suggested adventures and campaigns!

This book has been developed by the author of the novels himself, along with the creator of the Era d10 rule set, to provide a uniquely authentic experience within this universe.”

I’ve done three interviews with Ed Jowett of Shades of Vengeance and one Era: The Consortium gameplay review, so let’s categorize me as a fan. This Kickstarter is Shades of Vengeance‘s first licensed product for their Era d10 rule set. It stays in the sci-fi RPG realm that Era: The Consortium and Era: Balam pioneered, but this game adds a new dimension using Richard Tongue’s novel trilogy as its backdrop. With that, Ed, Richard, and company are really trying to pull every potential fan into their respective universes and, I believe, Battlecruiser Alamo RPG (Powered by Era d10) is going to be the proper gateway.

Egg Embry wrote comic book short stories, edited comic book series, wrote and drew a webcomic, and contributed to comic book journalism across the 2000s. Now, he buys the opportunity to write for a variety of tabletop role-playing games in the tradition of vanity press. NOTE: Articles may includes affiliate links. As a DriveThruRPG Affiliate/Amazon Associate/Humble Partner I earn from qualifying purchases.
View all posts by Egg Embry →
Tagged  Battlecruiser Alamo, Dreamscarred Press, FROM BEYOND:DESCENT, Kickstarter, Psionics Guide for Starfinder, Shades of Vengeance.
Bookmark the permalink.