“If I buy my way into RPG freelancing, will I ever be taken seriously?”

To obtain a job and be successful at it, generally, you need the applicable skills for that profession and you have to prove you possess said skills. I want to move from a role-playing game wanna-lancer to a freelance writer. My proof that I have those skills involves buying writing credits in RPGs via Kickstarter. Stocking my resume with vanity press entries. But if my resume is all vanity press, will that make me a laughing stock instead of someone to take stock in? 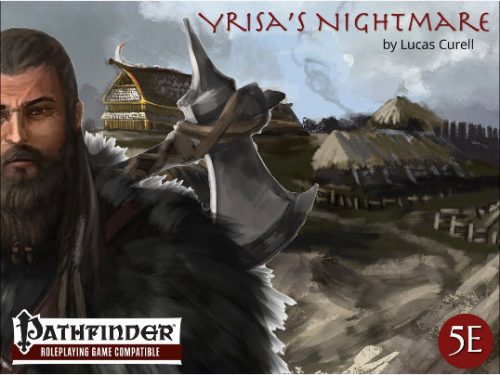 Before I dive too far into these thoughts, let’s touch on how the Kickstarter vanity press idea works? Some RPG Kickstarters offer rewards that let you submit content to their game. They offer an opportunity to write and you pay them for the opportunity.

Due to my schedule, this is ideal. It lets me write something with a low word count, typically a few hundred words like an adventure hook, a NPC, a location seed, a monster, or a magic item that will be printed and credited to me.

For my first purchase, I participated in Sasquatch Game Studio’s Primeval Thule for 5e where I provided a location seed in their campaign setting. Another opportunity that presented itself was Ember Design Studios’ Kickstarter for Yrisa’s Nightmare and Rats in the Street.

Yrisa’s Nightmare, an RPG adventure for Pathfinder and 5e by Ember Design Studios

Yrisa’s Nightmare is a supernatural mystery set in a viking fort town. Your characters arrive, supernatural attacks happen to them and those around the settlement, and your party either uncovers why these attacks are happening or they don’t get to leave. Ever. 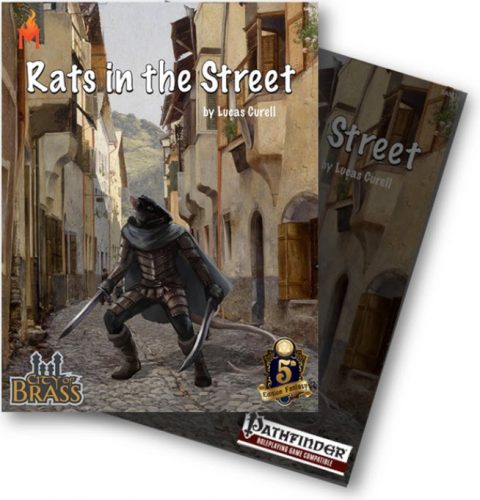 Rats in the Street. Featuring Wererats.

Rats in the Street (5e) by Ember Design Studios

Rats in the Street is a city adventure in the same world as Yrisa’s Nightmare. This time, you’re facing a gang of wererat thieves and you have to piece together the clues to stop them.

Launched in November, 2015, both adventures come from Lucas Curell the creator of the online RPG tool, City of Brass. The concept – viking mysteries – interested me but I collect Kickstarter writing credits. To get my $75 they needed something extra on top of:

That extra sauce that captured my wallet was the: 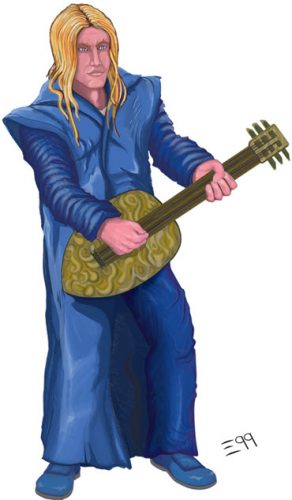 The opportunity to create an NPC expanded my resume from just a location seed to a character. I bought the ability to create three NPCs for Yrisa’s Nightmare. It was just before Christmas 2015 and these seemed like fun gifts for my RPG buddies, John “Cursed Sword” McGuire and Sir Leland Beauchamp. What did we do with three NPCs? We alluded to a shared history through them.

Lucas picked up on the shared backstory and saw a clever way to use the characters. He put Kaiya Blackmoore as an important NPC in Yrisa’s Nightmare. In that adventure, Sully and Celltar Drumthunder appear as part of the supernatural effects that drive the tale. In Rats in the Street, Sully and Celltar take on some of the larger NPC roles within the adventure. The characters unite these adventures through their shared easter egg (no pun intended) backstory. 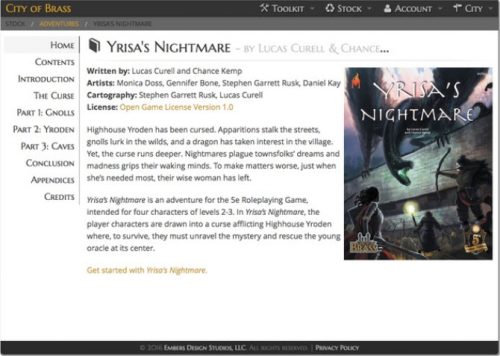 Credit where credit is due. Lucas took these characters, saw their backstory and potential within his world, and wove them into the fabric of his tales in Yrisa’s Nightmare and Rats in the Street. The steps to bring this to life – pay, bat ideas between John and Leland, write, draw, submit, read, smile – were all easier than I could have asked for. These adventures have been delivered and enjoyed. Vanity press RPG writer’s credit number two and RPG art credit number one complete! On to number three…

To my initial question, will I be taken seriously if my resume is all vanity press Kickstarter rewards? It was a worry. Then Sir Leland* and I went to Gen Con 2016, my first Gen Con. There we had the opportunity to meet Lucas and play through another adventure he created,  Bella’s Yarn (5e), another excellent adventure. I really liked playing mideval detective to solve that mystery. For his part, Lucas was awesome. Instead of treating me like a joke because I am trying to buy my way through the door he was happy to talk gaming, and Kickstarters, and RPG websites. He treated me like a welcome addition to the community. It cured my concern.

Will I be judged for my start in the industry? Likely. Will that be the end of my quest? No.

*The “Sir Leland” reference is because my buddy’s name is Leland Beauchamp – Amanda, Jeremy, John, Chad, Robert, the whole Tessera Guild, we all know Lee – anyways, in high school, he named his D&D knight, Sir Leland. Could you imagine if I tried that? Ser Egg. Only George RR Martin could pull that off… 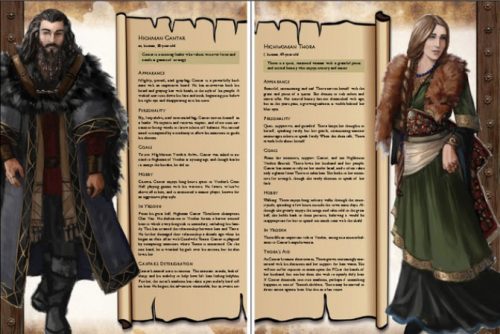 If getting a NPC into an adventure is on your Christmas 2016 wish list, Ember Design Studios is running another Kickstarter and is offering two options to get your sailor NPC into the mix (see the 6th update on the Kickstarter). Sunken Temple, an RPG adventure for 5e, Pathfinder, & WOIN by Ember Design Studios
Raised to-date (this Kickstarter is still going at the time of this writing) $4,273 starting November 18th, 2016