Another month, and a little more insight to my own family’s past. I only wish that I had an actual picture of my grandmother to show along with the following…

My mother was the best cook who ever lived. I also knew her to be the most critical person whom I have ever known, and, in her later years, one of the most fearful and paranoid. On her good days, she liked to laugh and joke. She loved to fish- both salt and fresh water; she was the first to drop her line and the last to leave. She wrote short stories, poetry, and a book about life in the Okefenokee Swamp.

She tried to be a good mother- nurturer to me she was not. In all fairness though, I saw her warm and fuzzy side as a grandmother to my children. Although our relationship was complicated at best, I never doubted her desire to see me succeed at a level which surpassed hers.

On the days her demons rose to the surface, she drank vodka- sometimes a weekend binge a month, other times many months would pass without any drinking. The realization of her drinking for the day assaulted my nose and sensibilities as soon as I opened the door in the afternoon after school- Momma asleep/passed out in the bed and the rest of the house a cold vacuum where sadness and pain lived.

I never saw her take a leisurely walk or do any form of formal exercise. Does pulling a wagon with fishing equipment count? She smoked two packs of Kent cigarettes a day, ate fried Southern food on a regular basis, drank off and on her whole life, and still lived to be 79.

That was the mother I knew. Married already for twenty years, my parents adopted me in their forties. I was the baby who would surely fill that void in my mother’s life.

But there was another person I never knew. Families have their share of stories and legends, and my mother had a crazy one- she was a horse diver in Atlantic City, New Jersey, in the summer of 1933 when she was seventeen. At that time, the diving show on the Atlantic City Steel Pier had been in existence since 1928. The horse diving show had been the creation of William “Doc” Carver in the 1880s. Originally a traveling diving show, it had become the primary attraction of many carnival acts on the Boardwalk. 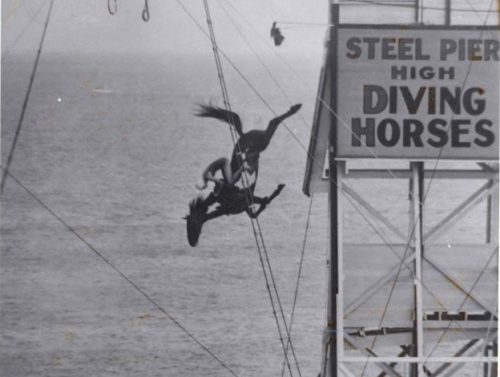 This was a show not for the faint of heart or spirit. A pretty girl sat on the back of a huge horse and dove 40-60 feet into a 12 foot pool. That depth was just enough for the horse to reach the bottom of the tank and push-off to swim to the surface. Different horses dove four times a day, seven days a week for the price of a one dollar admission to see this remarkable feat- definitely meeting the criteria of an extreme sport by the standards of that time. Divers made $50- $125 per week, a fortune compared to the normal $15 per week in a department store.

How would a seventeen year old girl from Waycross, Georgia, ever be a horse diver in Atlantic City, New Jersey, you might ask? That summer my mother had gone to stay with her older brother and his wife in New Jersey, a place where my uncle had found better job opportunities as a welder in the shipyards. My mother’s cousin Marie was already a temporary diver for the show. The star diver Sonora Webster Carver- also a Waycross girl- had been blinded on one of the dives in 1931, and, according to her autobiography, had needed rehabilitation and time to learn Braille. So the summer of 1933 could have very well been a period of transition where many different divers were used in the shows. According to Sonora’s sister Arnette French in the autobiography A Girl and Five Brave Horses, “If you rounded all the riders up, we’d fill Convention Hall- we were the stars of the Boardwalk.” 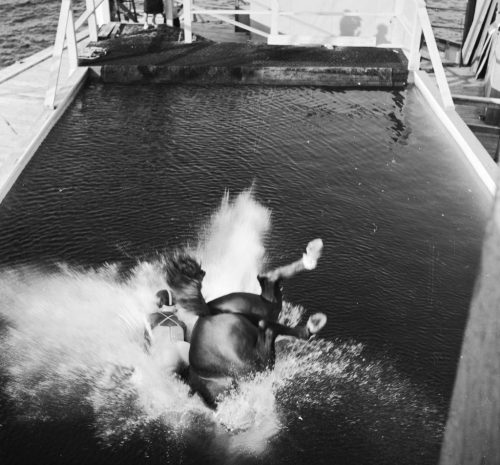 circa 1955: A diving horse and her rider disappearing in to a swimming pool with a splash. (Photo by Three Lions/Getty Images)

According to Momma and Sonora Carver’s autobiography, you had “to keep your head tucked to one side, so that when the horse raised his head as he jumped up at the bottom of the pool, you wouldn’t get smacked in the face.” That would have been the least of my worries. How would you have the nerve to jump on the back of that gigantic animal and then jump off a stand 40-60 feet in the air into 12 feet of water? What about being thrown off or kicked in the head under water? There were documented bloody noses, black eyes, broken cheekbones, collarbones, and teeth. Amazingly, no diver fatalities ever occurred. Sonora Carver’s blindness was the worst of the injuries, and she continued to dive despite her blindness for many years.

How does one person meet adversity and thrive despite it while another is haunted by her/his demons?  How did my mother evolve from having this courageous spirit and complete recklessness of youth to being beaten down from the disappointments in her life? If she could be a horse diver, she could have accomplished anything. I do believe life is about choices and consequences. She could have taken that job with Western Union and had her own career. She could have moved to a big city. She could have divorced my father. She chose to stay in the marriage, to live in the small town, and be a housewife. The life she chose would eventually lead to her becoming my mother, all the good and the bad of it. She was the mother I was supposed to have. I am who I am because of it.

I wish we could have had a different relationship… but we did not.

Instead of thinking about what might have been, I love to think about my mother dressed in that sequined bathing suit, waiting for that nearly one ton animal to reach the top of the ramp- her red hair flying- fearless and carefree- her future ahead with so much promise.

Writer of comics and novels. In 2006 his first short story "The God That Failed" was published by Terminus Media in their debut comic Evolution Book 1. Since that time he has had stories published in Terminus Media's Evolution Book 2 and Evolution Special, Kenzer and Company's The Knights of the Dinner Table, and Four J Publishing's The Burner #3. Currently he is eagerly awaiting the digital publishing of his first creator-owned comic The Gilded Age #1 to be published online as well as his first novel The Dark That Follows later this year.
View all posts by John McGuire →
Tagged  horse diving, Mickey McGuire.
Bookmark the permalink.