* Disclaimer – this review is largely spoiler free. A few small plot points and themes are revealed.

On a cold night in early December, I saw Arrival in a nearly empty theater. Now, the theater being almost vacant isn’t a commentary on Arrival’s quality. The hour was late, the weather was frigid, and everyone (besides me) was probably huddled inside their homes, still stuffed with Thanksgiving leftovers.

I’ll start by saying this: it didn’t disappoint.

From the first moment Amy Adams (as Louise, an expert linguist) appears, it’ s obvious Arrival is a character piece. The title suggests maybe an Independence Day-ish alien invasion or a Bodysnatchers-esque creep-fest. Nope. While the opening scenes share a sense of “what are these huge ships doing in our sky?” dread, every moment thereafter is unique to Arrival. 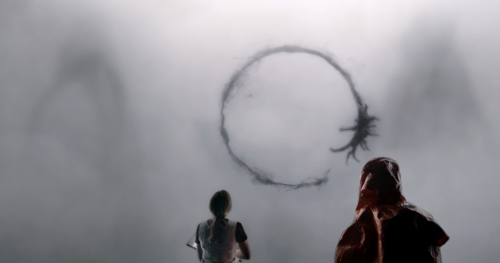 Turns out, Arrival is a thinking-person’s movie. Maybe a splash of Jodie Foster’s Contact mixed with a tiny dash of Interstellar, but with even less action. Let me repeat that: Arrival has almost no action scenes. That’s not to say nothing’s happening, but if you walk in expecting cities full of people to die and xenomorphs strutting around with murder on the mind, this movie probably isn’t for you. Like I said, I went in purely to do a little sci-fi research, and I got exactly what I expected. A mind game. A voyage of intellect and emotion, not of violence.

Amy Adams’ Louise is the key to the movie. And when I say she’s the key, I mean she’s the only character of substance. Sure, you’ve got competent performances by Forest Whitaker and Jeremy Renner, but Arrival is one of those films in which you get to know one person and one person only. Louise is a linguist, and her job is to find a way to communicate with some pretty cool looking extraterrestrials. Her conversations with humans are short and to the point. It’s really all about what’s going on between her and the aliens, and what’s happening in her head.

Which, as it happens, is a lot.

In pretty much every aliens-on-Earth movie ever made, the real question is: Why are they here? And in pretty much every aliens-on-Earth movie not named Arrival, movie-goers know within 45 minutes whether they’re going to be killed (Independence Day) hunted (Predator) or hugged (E.T.) But Arrival makes a point of stretching the question of why until the very end. In fact, having only seen it once (so far) I’m not entirely sure director Denis Villeneuve ever actually reveals the aliens’ true intent. Which is fine if you can appreciate subtlety, but perhaps less than ideal if you prefer nice, tidy endings. 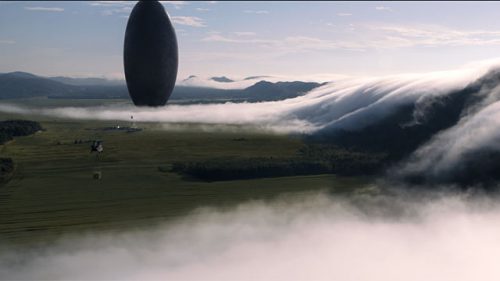 But…does it have guns?

I will say this: if Arrival’s intent was to show the meaning of hope and the power of human perseverance, both messages ultimately faded for me. And that’s not meant as a criticism, but more a commentary on the strange turn of events near the film’s end. If you’ve seen the excellent sci-fi flick, Ex Machina, maybe you’ll understand my meaning. Things get a little dark and morally murky at Arrival’s terminus. It’s something I personally enjoyed, but not something all movie-goers will appreciate. Or even notice.

So what you’ve got is a movie that moves at a measured pace, a movie that’s sprinkled with small reveals, and a movie whose ending might leave some scratching their heads…and others a little perplexed. The themes go way beyond meeting aliens. Some moviegoers might think it’s too slow, and that’s not a point I can really contest. It is slow at times. And that’s just fine with me.

Final verdict: I didn’t love Arrival, but I really liked it. And for my part, the science behind the aliens’ reason for coming to Earth and the weird/dark situation Amy Adams grapples with at the end made it a worthwhile film. If you like thinking movies, go see it. If not, download Edge of Tomorrow to squeeze in your action fix.

It’s worth mentioning the Jóhann Jóhannsson music score (mostly strings and piano) is haunting and excellent. I’ll be adding it to my soundtrack collection.

Oh, and it’s also worth mentioning (again) the aliens in Arrival are pretty awesome. I’d take them in a fight against pretty much any other movie xenomorph…ever.

My other movie reviews are here.

And for a book I want to make a movie out of, go here.