“I want to be a freelance RPG writer… so then, uh… why am I buying RPG playtester credits for my resume?”

Covers for the Tome of Beasts and the Book of Lairs

First, what’s a playtester? That’s an individual who puts an unpublished/untested game through its paces. They play and look for successes and flaws and communicate their findings back to the creator for consideration.

Second, why do I want to playtest something? Two reasons.

Unlike my prior purchases, I’m not buying RPG experience for myself. This time, I’m showing that I have enough experience to improve someone else’s work. 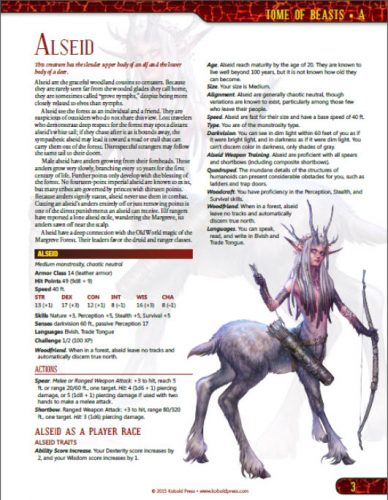 Alseid from the Tome of Beasts

Tome of Beasts by Kobold Press

In October, 2015, Dungeons & Dragons 5e was 15 months into their commercial lifecycle when Kobold Press kickstarted the Tome of Beasts and the Book of Lairs.

Why did they create the Tome of Beasts? At that time, 5e had a lone official Monster Manual of all the critters to fight. Volo’s Guide to Monsters was unannounced and 13 months away. The largest resource for third-party monsters was either homebrew or Frog God Games’ Fifth Edition Foes. The Fifth Edition Foes had been kickstarted the same month that 5e launched (along with two other 5e books). They generated nearly $64,000, so there was precedent that showed fan demand. Despite the monster foes, homebrews and various one-offs for 5e, there was a desire for even more monsters. Enter Kobold Press and their offering, the Tome of Beasts.

Why did they create the Book of Lairs? 15 months into the commercial existence of 5e, there were a number of official adventure paths but not as many standalone dungeons or monster lairs. Just want a dungeon for your characters to crawl with a hook, monsters, and treasure instead of a whole campaign? Kobold Press‘ Book of Lairs is for you. 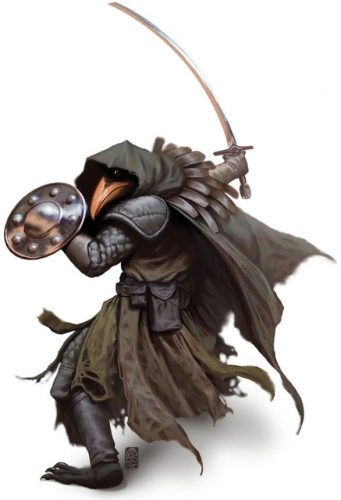 Let me type a few words on Kobold Press. They are one of the largest 3PPs (third-party publishers) in gamedom. They wrote the first two official hardcover modules for 5e – Hoard of the Dragon Queen and The Rise of Tiamat – and have proven to be a consistently nice group of folks. Kobold-in-Chief Wolfgang Baur, hobbylancer Ben McFarland, Kobold Minion Dan Dillon, and more have decades of combined professional RPG experience creating… well, throw a dart at any quality RPG product and chances are someone there had a hand in it.

Why Kobold Press is dear to my heart is spelled out in their FAQ. I’m not going to pretend to be an expert but I think – THINK – that they used to crowdfund and, to a degree, crowdsource their products.  Effectively, kickstart their RPG content the way I blog about before there was a Kickstarter. They were ahead of the curve in a way that foreshadowed what I want to achieve. Their FAQ hints at what I’m hoping to achieve – resume building through patronage.

One of the holes in my resume is credited playtester. Is it an important part of your RPG resume? Yes. It shows you have the skills to look at a game that is 90% to 95% of the way to publishable and find that last bit needed to make it shine. Playtester credits “prestige” is ranked by what company or project that you are doing the playtesting for. As I said, Kobold is a large 3PP so I want to have that on my resume. 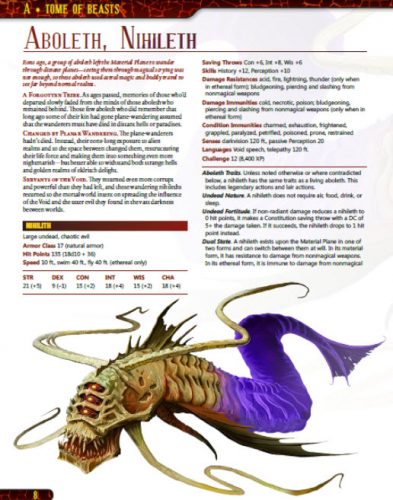 Nihileth from the Tome of Beasts

Kobold’s Tome of Beasts offered playtesting and more. For this Kickstarter, I put in $180. What did I get for that?

That encompasses the monsters, lairs, adventures, and sounds – the tangibles. What did I get that I can put on my resume and speak to:

I won for the extra $23.10! I got to playtest several monsters and provide feedback (the results of which I was able to see in the final product… now, whether it was my notes or every reviewer’s thoughts, I don’t know but changes were made).

For the Tome, I got to playtest monsters with several friends including John McGuire, Sir Leland Beauchamp, and my fiancee and we are all listed in the book. That’s a moment I reflect on from time-to-time, we got to have fun and put that fun into print. 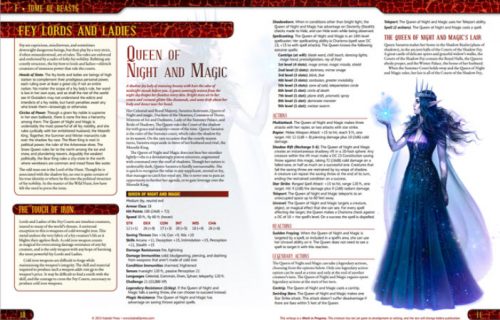 Queen of Night and Magic from the Tome of Beasts

Experience-wise, I got to attend a virtual seminar with Wolfgang Baur and Dan Dillon to hear what makes a great monster and ask questions. With that education, I submitted a beast for their monster submission contest and got professional feedback from Wolfgang. I did not win but Dan gave me his thoughts and it amounted to [paraphrasing] not bad.

One of the challenges of buying credits is that the publisher has an obligation to make your submissions, whatever they are, work since you, you know, paid to be in their product. Since you are a customer, feedback from the publishers may be filtered. The monster submission for the Tome of Beasts was a contest open to every backer. Because it’s a contest, they were under no obligation to print my submission. I didn’t win but, based on their feedback, my beast had been in contention for one of the final slots. I lost because others were better, not because mine was awful. To get an unfiltered ‘not bad, not perfect, but not bad’, was encouraging.

For $157, I got some amazing 5e products. I get use out of them more often than any other 3PP I own. For $23, I got to provide feedback on a book that has gotten a lot of love, virtually meet the Kobold-in-Chief and Kobold Minion No. Dan (I don’t know his serial number… oy), submit a monster and get useful feedback that helped me to grow as a creator. That was $23 well-spent! 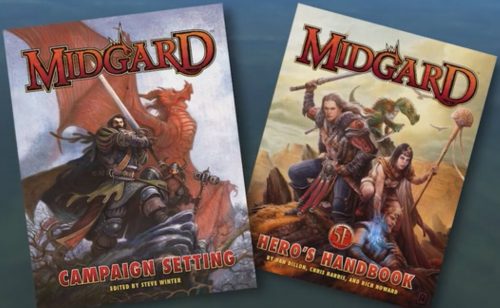 Covers for the Midgard Campaign Setting and Hero’s Handbook

Want to playtest the revised Midgard campaign setting for 5e or Pathfinder? There are a number of pledge levels on this Kickstarter that let you playtest the setting. I’ll delve into the ins and outs of what vanity press options are available through that Kickstarter before it ends on February 24th. In the meantime, I suggest you check it out.