I’ve been home three days now, but they’ve not been the best of days. I woke up Monday feeling rough and then realized soon enough I had a stomach virus. Today I’m better, but not quite back to normal. Not fun, especially after such an incredible weekend. Part of what I love about conventions is meeting up with friends I only see at conventions. I have a couple I don’t see but once or twice a year. So that is always a treat. I definitely had a little too much fun this weekend.

Photos…. I have very few. I’ve found that since I’ve begun attending conventions as an artist, I either don’t think about taking photos or I simply don’t have time. Here’s a very tiny collection, if you’re interested in seeking more out, the JordanCon Group on Facebook has a great gallery of images from this year’s event.

My friend Melissa Gay getting first class treatment in the art show.

It occurred to me to have Melissa take a photo of us.

We played Loteria with John Picacio.

This weekend was my most successful convention to-date. I sold my largest, most expensive piece, Renascentia as well as, eight other pieces from my art show bay. As for the prints I brought, I only sold 1 of the Alchemist and 1 of Spirit Guardian, but all 4 of the limited edition Dawn and Dusk prints. Those were more expensive than the regular prints and smaller, so go figure. I obviously should have brought more. Live and learn. 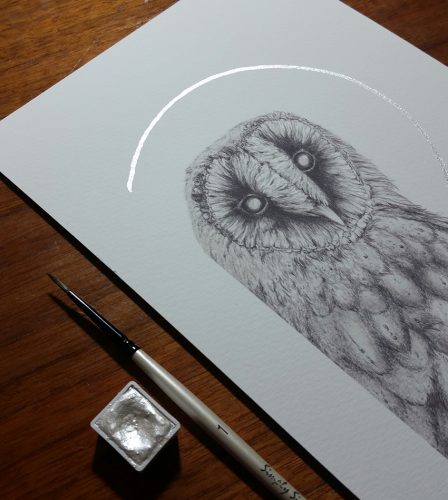 Regardless, I’m kind of blown away. I don’t think I’ve ever sold so much art in one weekend. I came home with empty boxes! A few of the unsold pieces will go into my shop, but some of the pieces I will retire and others I’ll store for another show.

What was different about this year compared to last?

1. JordanCon hosted DeepSouthCon – It’s a travelling convention. Our attendee numbers were higher than last year and author Brandon Sanderson was there too.

2. I wasn’t an unknown. After winning Judges’ Choice last year I did gain new followers on Facebook from the convention, some of which became new fans of my art and in turn new friends. I returned to JordanCon this year feeling as if I was part of their family.

3. I was more active, socially. Last year, I didn’t really know anyone. This year, I had a few friends that helped me feel more comfortable. We all hung out a lot and went to various room parties where I met more people. I spent an hour behind John Picacio’s (Artist Guest of Honor) table, just chatting. And I was also a part of an event called Win, Lose or Draw. I’m hoping to be even more involved in the art show programming next year. Ultimately, I met and spoke with so many more people than I did last year. My lips are still chapped from talking so much!

It’s a little weird having a big blank space on my wall. But, I’m okay with Renascentia going to a new home. It was time. She helped me discovered exactly what I want to do with my art–what I want to say. It took a year, but now I have Earth Rituals about to begin. It’s an exciting time. 🙂

Amanda Makepeace is an award winning illustrator inspired by nature, mythology, magical beings, and distant worlds. She is the co-founder of the Bird Whisperer Project, a monthly art challenge focused on spreading the the love of birds and art making for everyone. Her art has appeared in ENnie award-winning games and on the covers popular independant novels and anthologies. Her latest project is the cover art for the Long List Anthology Volume 4, a book featuring Hugo nominated stories. Amanda is a regular at Fantasy and SciFi conventions in the southeast, and an award winner at JordanCon, DragonCon, ChattaCon, and LibertyCon. http://www.amandamakepeace.com
View all posts by Amanda Makepeace →
Tagged  art, art show, Atlanta, convention, JordanCon, wheel of time.
Bookmark the permalink.