“Hunter: The Vigil has always been a fan favorite because it’s a modern horror game that gives everyday people the chance to be heroes,” says Monica Valentinelli, the Hunter: The Vigil Second Edition developer. “In Second Edition, there are more monsters than ever before. You are given more tools to investigate the strange and unexplained while reinforcing your connections to fellow hunters and your community. Hunter isn’t just about fighting bloodsuckers or expelling ghosts from a haunted house–it’s about the hard choices you make from night to night to keep yourself, your cellmates, and your loved ones safe while recognizing that hunter society is not a utopia or a monolith.”

Hunter: The Vigil Second Edition is a modern horror game for players committed to hunting the supernatural. Three playing styles are included in this standalone rulebook: cells for tier one gameplay, compacts for tier two, and conspiracies for tier three.

In addition to seven compacts and seven conspiracies included in this new edition, highlights include:

– Expanded lore and support to play a hunter at the tier you prefer. Includes two new compacts (SWORN, Nine Stars) and a new conspiracy called the Council of Bones.

– A guide to the strange and unexplained lurking in different environments and how to create your own. Includes cryptids like the black dog, ghosts like the haunted hitchhiker, and new monsters inspired by urban legends.

– Setting rules for three types of mysterious places to add locations hunters can explore, investigate, and cleanse of their supernatural taint.

– Tools to ground hunters in their everyday lives and help mitigate the horrors of the Vigil. 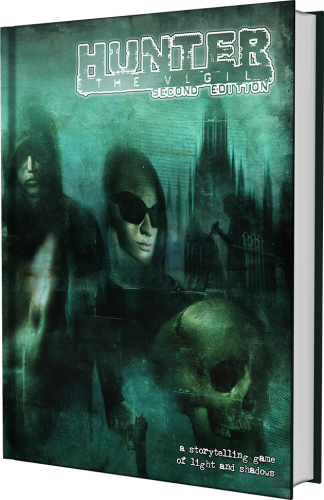 The manuscript for Hunter: The Vigil Second Edition has been completed, and chapters will be released during the Kickstarter to backers. Delivery is planned for February 2022 to account for stretch goals and printing of this supplement. Standard eBook and Hardcover editions will be released in game stores and online following fulfillment of the Kickstarter.

About Onyx Path Publishing:
Founded in 2012, Onyx Path Publishing is a Pennsylvania-based company dedicated to the development of exemplary, immersive worlds. Working with a group of amazingly talented creators, we explore print, electronic and other forms of media distribution to make our products available to our fans. With over 25 years of publishing experience from which to draw, we are industry professionals who love the art of the game and plan to continue making meaningful, innovative contributions in the years to come.

About Paradox Interactive:
The Paradox Interactive group includes publishing and internal development of games and licensing of World of Darkness. The
publishing operation publishes both internally developed titles and titles developed by independent studios as well as music and books. The game portfolio includes more than 100 titles and Paradox Interactive owns the most important brands, including Stellaris, Europa Universalis, Hearts of Iron, Crusader Kings, Cities: Skylines, Magicka and Age of Wonders. From the start over ten years ago, the company has published its games all over the world, initially through physical distribution using partners, but beginning in 2006 has primarily distributed digitally using its own publishing arm. The development platform is primarily PC, but the company has released games on console and mobile platforms as well.

Egg Embry wrote comic book short stories, edited comic book series, wrote and drew a webcomic, and contributed to comic book journalism across the 2000s. Now, he buys the opportunity to write for a variety of tabletop role-playing games in the tradition of vanity press. NOTE: Articles may includes affiliate links. As a DriveThruRPG Affiliate/Amazon Associate/Humble Partner I earn from qualifying purchases.
View all posts by Egg Embry →
Tagged  Hunter: The Vigil 2e, Kickstarter, Onyx Path Publishing.
Bookmark the permalink.