Kansas City, MO (October 5, 2020) – Andrews McMeel Publishing (AMP) announces the launch of a Kickstarter campaign for Flames of Freedom:  Grim & Perilous RPG, effective October 5 – November 4, 2020. Backers of the campaign will have the opportunity to gain early access to game material, play in their own quickstart scenario, and contribute to Flames of Freedom custom incentives.  An American Gothic horror role-playing game, Flames of Freedom is powered by ZWEIHÄNDER RPG. 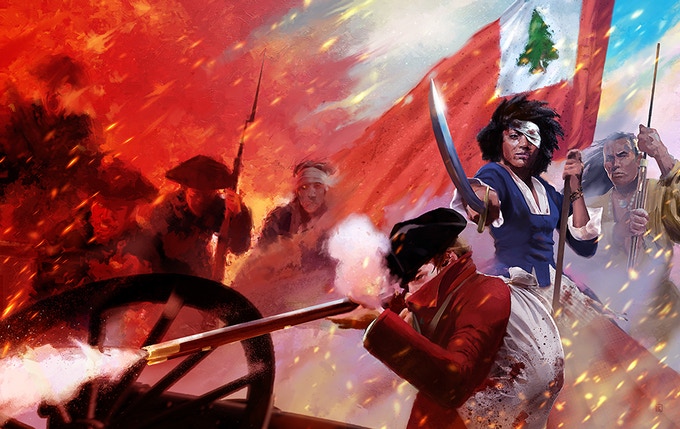 “We are excited to be a part of this collaborative venture, with Daniel D. Fox leading an exceptional, diverse team of developers to bring Flames of Freedom to life,” said Kirsty Melville, president and publisher of AMP.  “The Kickstarter campaign will enable us to enhance the immersive experience, generate engagement and excitement with players, and augment the experience beyond the publication of the book, slated for release in August 2021.”

Flames of Freedom is set at the dawn of the American Revolutionary War of 1776, as a tangled web of conspiracy spans North America. In the war for survival, creed, color, culture or gender do not matter – all stand together – as the Rebels take up arms against the British Empire. But even as the Revolution has begun, something far more mysterious is brewing in this treacherous world.

Agents of the occult entreat both the Continental Army and Loyalist Red Coats. Freemasons conspire in the City of Brotherly Love. Maryland is in the throes of a witch hunt by the Knights Templar. Amid the chaos, other grim fairy tales have emerged populated by witches, devils, ghouls, and an ancient enemy seeking to consume all.  In this land, players’ grim & perilous tale hangs in the balance – to conquer – or be conquered.

Thoroughly researched by Richard Iorio and enhanced by an exemplary development team led by Fox, Flames of Freedom explores a range of cultures beyond traditional European influences of early America. With considerable attention and diligence, the game was designed, developed and produced by a multicultural team of diverse identities, beliefs and orientation, with Black cultural consultants, Indigenous writers of the nations represented in the work, and RPG safety and trauma experts contributing to its creation.

Egg Embry wrote comic book short stories, edited comic book series, wrote and drew a webcomic, and contributed to comic book journalism across the 2000s. Now, he buys the opportunity to write for a variety of tabletop role-playing games in the tradition of vanity press. NOTE: Articles may includes affiliate links. As a DriveThruRPG Affiliate/Amazon Associate/Humble Partner I earn from qualifying purchases.
View all posts by Egg Embry →
Tagged  Andrews McMeel Universal, Flames of Freedom, Kickstarter.
Bookmark the permalink.