FIGHT TO SURVIVE THE NIGHT IN PATHFINDER PLAYTEST PART 3,

Paizo challenges players to confront the horrors of Doomsday Dawn and then give feedback at PathfinderPlaytest.com. 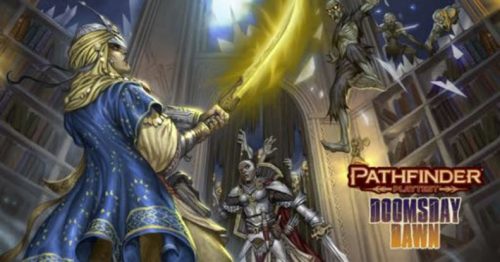 REDMOND, WASHINGTON (September 10, 2018): Today, “Affair at Sombrefell Hall” the third of seven scenarios in the Doomsday Dawn adventure officially began at Paizo Inc. The relentless adventure for four 7th-level characters was written by acclaimed Paizo Developer, Amanda Hamon Kunz. It runs on real and virtual tabletops through September 23 as part of the worldwide, free playtest of the Pathfinder Second Edition.

Jason Bulmahn, Director of Game Design at Paizo, introduced the new scenario saying, “A group of agents of the Palantine Eye are sent to secure the aid of an occult scholar who is on sabbatical at his family estate, which just happens to be in haunted Ustalav.”

The playtest is available as a free PDF bundle. Changes to the playtest have already been made! Rules Update 1.2 and a new character sheet have just been added. Player, Game Master, and Open Surveys unlock as each new part begins. They will remain open throughout the playtest period. The PDFs and surveys are all available at PathfinderPlaytest.com.

The Paizo Twitch channel (twitch.tv/officialpaizo) hosts live play every Thursday from 2-5 PM Pacific and discussions with the design team every Friday at 4 PM Pacific.

Paizo also discusses the surveys and resulting game changes on its blogs. Players and Game Masters can participate in the Pathfinder Playtest Forums and sign up for email updates on paizo.com.