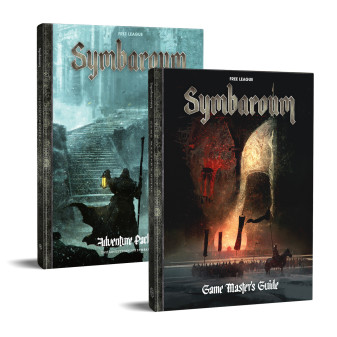 The book is set to release next week, but it can be purchased today in the Free League webshop, alone or bundled with Adventure Pack 4, which will be officially launched later this year.

The Game Master’s Guide features three sections, meant to inspire and support Game Masters when it comes to everything from the creation of homebrew adventures to managing sessions around the gaming table:

Adventure Pack 4 is a 112-page hardcover book, including two scenarios that in different ways relate to the growing internal divisions within the Ambrian realm. Call of the Dark plays out in the northern territories of the Lost Land of Alberetor, where the player characters will accompany a lowborn noble who is looking to prove the status of her family. The second adventure, Retribution, initially deals with the search for a person who has gone missing in the city of Kurun, but is soon shown to involve events which may have serious consequences for the relationship between the peoples of the Davokar region.

The dark fantasy roleplaying game Symbaroum was launched in 2015 and has captured the imagination of ever growing crowd of gamers with its evocative art and rich game setting.

“Symbaroum excels in every single aspect of game design: the setting, the rules, the layout, the art.”
– Antonios S, RPGnet

“The simple system and rich setting, thick with dark and evocative imagery, makes this a worthy consideration for new and experienced gamers alike.”
– Paul Baldowski, GeekNative

“All in all, this is a stunning piece of work. It has all the sophistication of 13th Age, the mechanical beauty of Dungeon World, and the dark attractiveness of Warhammer Fantasy in a comprehensive and elegant game.”
– Rodney Orpheus, Medium

Egg Embry wrote comic book short stories, edited comic book series, wrote and drew a webcomic, and contributed to comic book journalism across the 2000s. Now, he buys the opportunity to write for a variety of tabletop role-playing games in the tradition of vanity press. NOTE: Articles may includes affiliate links. As a DriveThruRPG Affiliate/Amazon Associate/Humble Partner I earn from qualifying purchases.
View all posts by Egg Embry →
Tagged  Free League Publishing, Symbaroum.
Bookmark the permalink.