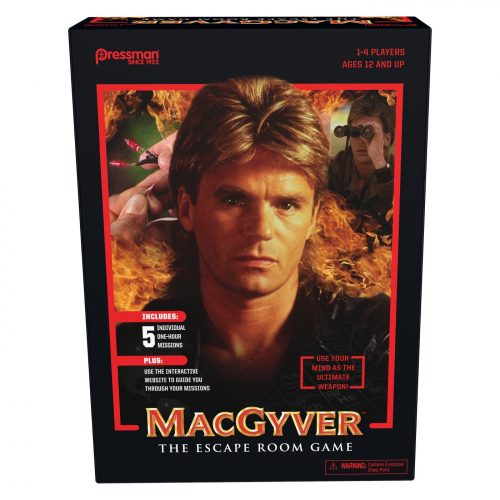 MacGyver: The Escape Room Game brings the challenge of an escape room straight to the comfort of a player’s home. Under license by CBS Consumer Products, this escape room in a box includes five, individual, hour-long missions that will require players to use their mind as the ultimate weapon.

MacGyver’s team must use the interactive website to guide them through the missions, while keeping in contact with their operative at the Phoenix Foundation to track their progress.

Players will need to work together and use the tools at hand to solve puzzles and diffuse bombs. Think outside of the box, as you discover secret codes, take on high-risk missions, and face off against a familiar foe.

“Pressman’s escape room game is unique since players have to ‘MacGyver’ their way through the missions by using ordinary, everyday objects like a paperclip,” said David Norman, President of Pressman Toy Corporation.

Missions are inspired by episodes from the original show. You will work together to escape from an underground laboratory, land an airplane, survive a dangerous factory, flee from a missile silo and outsmart Murdoc in the grand finale.

Will MacGyver save the day, or will it end in disaster? Designed for 1 – 4 players, ages twelve and up. 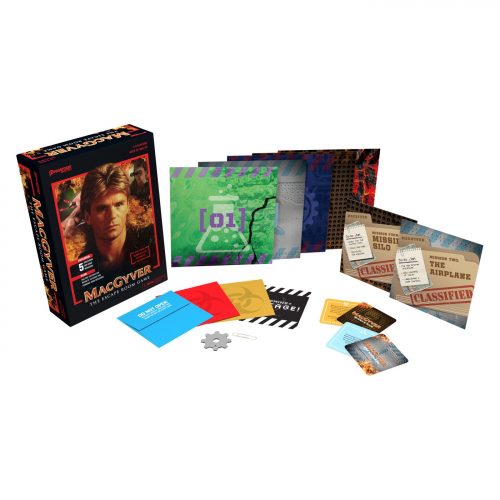 Since 1922, Pressman has been entertaining families for generations – from making Chinese Checkers into a craze that swept the nation in the 1920s to creating timeless classics such as Rummikub®, Tri-Ominos®, and Mastermind®.

Pressman’s iconic red boxes have introduced millions of Americans to the joys of Chess, Checkers, Backgammon, Cribbage, Bingo, Dominoes, Mancala, and a host of other classic games. Pressman has helped youth discover the world around them with its classic toddler toys, such as Let’s Go Fishin’™, Mr. Bucket™, and Lucky Ducks™. In addition, Pressman has been a leader in creating licensed games and puzzles based on the Diary of the Wimpy Kid™, Harry Potter™, Wheel of Fortune™, and more.

Egg Embry wrote comic book short stories, edited comic book series, wrote and drew a webcomic, and contributed to comic book journalism across the 2000s. Now, he buys the opportunity to write for a variety of tabletop role-playing games in the tradition of vanity press. NOTE: Articles may includes affiliate links. As a DriveThruRPG Affiliate/Amazon Associate/Humble Partner I earn from qualifying purchases.
View all posts by Egg Embry →
Tagged  MacGyver The Escape Room Game, Press Release, Pressman.
Bookmark the permalink.