Preorder the trove of new releases at your favorite local game store or PathfinderSecondEdition.com. 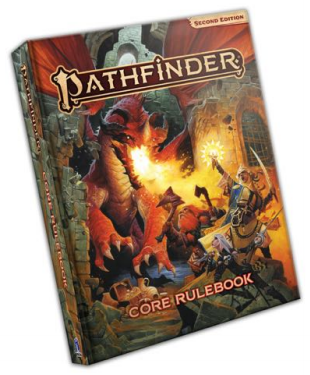 REDMOND, WASHINGTON (March 6, 2019): After years of development and feedback from more than 125,000 players, Paizo Inc. has announced the August 1 launch of the second edition of the Pathfinder Roleplaying Game!

Paizo Publisher Erik Mona said, “The launch slate provides everything you need to set out on a world of limitless fantasy adventure. With more than 20 years of active development and playtest feedback from more than 125,000 gamers, the new Pathfinder rules are easy to learn and exciting to master. We can’t wait to see the diverse and deeply customized characters the RPG community will create!”

Pathfinder Adventure: The Fall of Plaguestone

Pathfinder Flip-Mat: The Fall of Plaguestone

By Jason A. Engle and Jason Bulmahn

By Sarah Robinson and Logan Bonner

By Ekaterina Burmak and Paizo Staff

By Wayne Reynolds and Paizo Staff

A full description of all Pathfinder Second Edition launch products can be found at PathfinderSecondEdition.com. Paizo will reveal the September lineup in a few weeks, so make sure to bookmark the site. Follow their live Twitch streams at twitch.tv/officialpaizo.com for the latest news.

Paizo Inc. is one of the world’s leading hobby game publishers. Since 2002, millions of players have joined the goblin army by playing the Pathfinder® and Starfinder® roleplaying games across tabletops, at conventions, at their favorite local game stores, and digitally on virtual tabletops. Paizo.com is an online retail hobby destination for millions of gamers that carries the latest products from top hobby game publishers. Players can also find the newest releases, as well as accessories like dice and maps, miniatures, T-shirts, and goblin plush toys, to quickly replenish their adventuring supplies for the next dungeon run.