By Egg Embry Press Releases, Role Playing
REBEL AGAINST AN EVIL EMPIRE WITH
“AGAINST THE AEON THRONE”
Paizo launches the three-part Adventure Path series for Starfinder with “The Reach of Empire.”

REDMOND, WASHINGTON (September 5, 2018): Today Paizo launched “The Reach of Empire,” a Starfinder Roleplaying Game adventure for four 1st-level characters. The adventure begins the Against the Aeon Throne Adventure Path, a 3-part, monthly campaign in which players visit and explore some of the worlds of the sinister Azlanti Star Empire. It also includes a gazetteer of the Pact Worlds colony of Nakondis, a collection of new starships and starship options used by the Imperial Fleet of the Azlanti Star Empire, and a selection of new monsters from alien worlds. It is available for $22.99 at paizo.com and retailers around planet Earth. 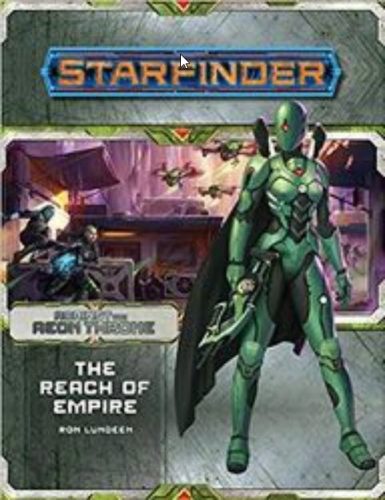 “Hired to transport supplies to a new Pact Worlds colony in the Vast, the heroes discover that the Azlanti Star Empire has invaded and occupied the colony with a small military force. The heroes must liberate the colony from its merciless oppressors, only to learn that the Azlanti have taken both an experimental starship drive and one of the colonists―an old friend of the heroes―back to the Star Empire! – “The Reach of Empire”Each monthly full-color softcover Starfinder Adventure Path volume contains a new installment of a series of interconnected science-fantasy quests that together create a fully developed plot of sweeping scale and epic challenges. Each 64-page volume of the Starfinder Adventure Path also contains in-depth articles that detail and expand the Starfinder campaign setting and provide new rules, a host of exciting new monsters and alien races, a new planet to explore and starship to pilot, and more!“I loved framing an adventure where the PCs are stealthy rebels. The enemy seems so powerful and overwhelming at first that the heroes must be calculated and careful, hoping to gain allies, perform sabotage, and tip things in their favor. Heroes do their fair share of exploring abandoned locations and confronting traps and monsters, so I liked having an urban-based adventure where the stakes feel high and they’re working among the people that they’re helping.” – Ron Lundeen, Starfinder Developer and lead writer of “The Reach of Empire.”The Against the Aeon Throne Adventure Path will continue in September and November with “Escape from the Prison Moon” and “The Rune Drive Gambit.” Find out more at paizo.com.About PaizoPaizo Inc. is one of the world’s leading hobby game publishers. Since 2002, millions of players have joined the goblin army by playing the Pathfinder® and Starfinder® roleplaying games across tabletops, at conventions, at their favorite local game store, and digitally on virtual tabletops. Paizo.com is an online retail hobby destination for millions of gamers that carries the latest products from top hobby game publishers. Players also find accessories, like dice and maps, miniatures, T-shirts, goblin plush toys, and the newest releases to quickly replenish those adventuring supplies for the next dungeon run.

Egg Embry wrote comic book short stories, edited comic book series, wrote and drew a webcomic, and contributed to comic book journalism across the 2000s. Now, he buys the opportunity to write for a variety of tabletop role-playing games in the tradition of vanity press. NOTE: Articles may includes affiliate links. As a DriveThruRPG Affiliate/Amazon Associate/Humble Partner I earn from qualifying purchases.
View all posts by Egg Embry →
Tagged  each of Empire, Paizo, Press Release, Starfinder, The Reach of Empire.
Bookmark the permalink.