REDMOND, WASHINGTON (November 14, 2018): Today Paizo Inc. released The Diaspora Strain, the first volume in the Signal of Screams Adventure Path for the award-winning Starfinder Roleplaying Game. The 64-page volume, whose adventure was written by Chris S. Sims, is the first of three volumes in a horror-themed campaign to overcome a creeping madness. It is available for purchase at paizo.com and retailers worldwide at an MSRP of $22.99 for hardcover and $15.99 for PDF. 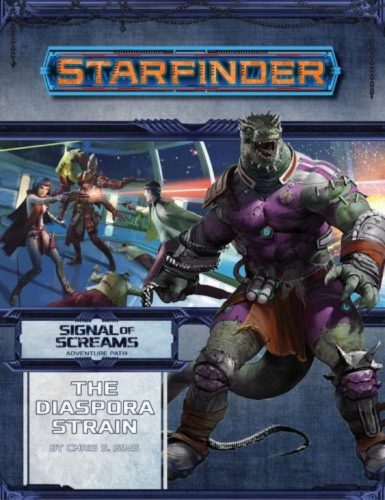 “Horror relies on turning the normal into the threatening. The expected becomes terrifyingly other. This adventure takes that idea and runs with it, tapping into the id of the Starfinder galaxy while paying homage to other great horror stories, such as Alien,Oculus, Poltergeist, The Shining, and more. Heroes in this adventure will find their senses turned against them. They won’t know what’s real. And that means their reactions to what they sense will also be untrustworthy. They won’t be able to solve a lot of their problems by shooting first, turning even the action-hero norm of Starfinder on its head. Horror also isn’t about winning. Therefore, my hope is that players not only enjoy this disturbing journey, but also reach the conclusion with a sense of relief, grateful to have survived,” said Paizo Developer Chris S. Sims.

The Diaspora Strain also includes a new corruption system by Jason Keeley and advice for running horror campaigns in the Starfinder RPG by Epidiah Ravachol, author of the incredibly popular indie RPG Dread.

Elysium is a lie. While relaxing on a posh asteroid resort, the heroes are beset by a plague of madness and horrible transformations. After dealing with its unfortunate victims, they learn these tragedies are part of a plot engineered by an insane scientist trapped on the Shadow Plane. This scientist has used funding from an amoral corporation to craft a mysterious signal that will spread pain from world to world. As this corruption begins to infect the heroes, they must stop the transmission at its source to save themselves—and the rest of the galaxy!

The Diaspora Strain begins the Signal of Screams Adventure Path and includes: