This week I wanted to write a blog about my favorite love stories (romantic moments) from comic books. A sort of companion piece to Chad’s post yesterday. But I hit the wall hard on that idea, shelved it, and moved on.

I thought about writing specifically on Spider-Man and his “former” marriage to Mary Jane, but it’s still not anywhere near where I would like it to be (it’s coming at some point, I’m sure). So I moved on.

A couple of other thoughts struck me, but all of them required something, some aspect of the blog, that I am not entirely ready to begin/write/end. I put those in the “To Be Done” folder.

And it occurred to me – I think I’ve encountered Writer’s Block for the first time in a long time. 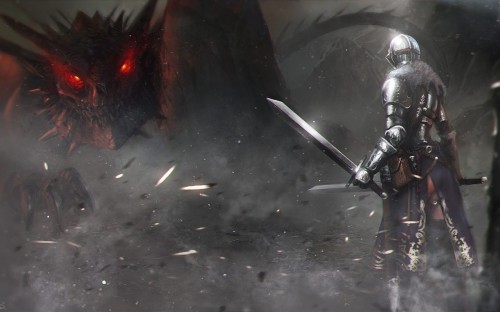 There is a problem to this sort of thinking, though. I don’t believe in Writer’s Block. Much like Santa and the Easter Bunny, I believe it is a mythical concept used by many as an excuse. An easy out that no one really knows how to conquer. Much like the ancient beasts of old, you’d need a knight in armor to slay this dragon. A non-writer might not understand, but they knew enough to know not to probe too deep.

They might whisper to your other friends, “What’s wrong with John?”

“Oh… I better stay clear.” (as if they could catch it)

Fellow writers would go along with the gag. “Terrible thing, that Writer’s Block. Got me back in ’06 for the better part of a year.”

And you would nod and shake your head, but know in your heart of hearts that it was all a lie.

I did not know this truth for a long time. I leaned on this idea when what I really wanted to do was play video games or watch a movie or do anything other than sit in front of the computer and type out string after string of words. For me, I knew that Writer’s Block was just an easy out.

Turns out, I had it wrong. Writer’s Block as I think of it doesn’t exist. That much is true. Discipline has long been it’s ancient enemy. But this creature out there lives in the shadows of a writer’s mind. It preys on any possible weakness it can find. It whispers terrible nothings into your ears.

Tired? Don’t worry about those words tonight. There is a new South Park on after all.

Fried from a long day of work? No big deal, Facebook will comfort you in this hour of need.

Got some rough edits back and you don’t even know where to begin? Old WB has got your back and has warmed up the XBOX with your favorite game all prepped.

Last night’s writing session go absolutely nowhere and now you’re afraid that all those words you wrote and will write on the project will be absolute dog shit? Well, you’re right. Don’t bother, you suck. 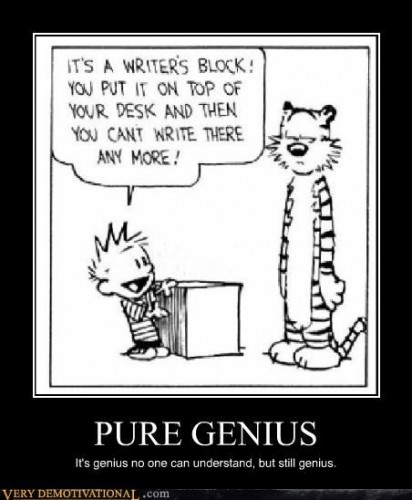 Calvin has it more right than even he knows.

This is the enemy. Writer’s Block is the thing that squeezes its vice-like grip around my brain and tries to convince me in any and every way possible to not write.

And the sad thing is, IT wins a fair amount of time. Sometimes without even trying.

But… but… but… I have found the best defense for it is a good offense. When I really get going on a project I have far fewer of the nights where Writer’s Block seeps in and prevents words from appearing on the screen. Instead, more ideas begin to flow out from me. My fingers struggle to keep up with my thoughts and I wonder how many more ideas get lost in the shuffle between brain and keyboard. When things are going well there is no such thing as Writer’s Block. It truly does become just another arrow in the excuse quiver. And you forget it even exists at all.

But don’t forget about it. Use it as further fuel for your own creative fire. Before beginning this blog I had not seen that old boy for a few years. Instead my nemesis has been TIME more than anything else. I have about 25 short stories that exist in some form or fashion. I have about 5-6 comic story arcs that could see the light of day someday if only I wrote them (and then convinced someone to actually draw them). And I have about 4-5 novels that I want to write. So Writer’s Block hasn’t had much of a chance to do anything to me. I forgot that it really existed, and in that moment it drew itself back into my soul and waited until there was a perfect time to strike.

Yet, here I am, near the end, and I’m not sure if he really was here at all tonight. The words did come. Maybe, just maybe, I imagined the whole thing. 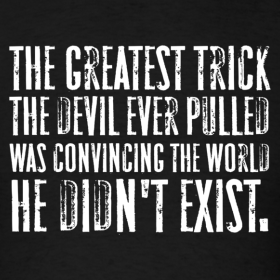 Writer of comics and novels. In 2006 his first short story "The God That Failed" was published by Terminus Media in their debut comic Evolution Book 1. Since that time he has had stories published in Terminus Media's Evolution Book 2 and Evolution Special, Kenzer and Company's The Knights of the Dinner Table, and Four J Publishing's The Burner #3. Currently he is eagerly awaiting the digital publishing of his first creator-owned comic The Gilded Age #1 to be published online as well as his first novel The Dark That Follows later this year.
View all posts by John McGuire →
Tagged  creativity, John McGuire, tools, writing.
Bookmark the permalink.