The Case for (and against) Social Media

There, I said it.

I’m old enough to remember when life was different. Don’t get me wrong; I’m not complaining about the way it is now. I’m sitting here on my couch, laptop in lap, using my iPad as a mouse pad, streaming Hans Zimmer through my Bose Bluetooth mobile speakers. For writers, life has never been easier. Twenty years ago, we had to handwrite everything…offline…on paper…with strange little instruments called pencils. If we needed to do critical research, we had to shuttle down to gloomy places known as libraries. There was no meaningful internet, no Google, no cell phones. Word processing was far from refined. Hell, even the image above (created with GIMP) I would’ve had to hand-draw. Creating this document would’ve taken me the entire day. As is, I’m expecting to spend an hour on it, and not a minute more.

So yeah, we’ve got it made these days. We’ve got wireless internet, primo software, smart phones, Wikipedia, and Kindle. All the peripheral gunk that used to slow us down has been carved away. It should be just us and the words, no boundaries between me the writer and you the reader.

But there’s a catch. You know what it is. If you’ve ever sat down to write, read, or work meaningfully at a computer, you’ve been sidetracked. If you’ve ever needed to market yourself, pitch an idea, or slap the world in the face with your latest epic creation, you’re familiar with what I’m talking about. Don’t deny it. Don’t be ashamed. It happens. Look. Right there. See the space between the ‘s’ in ‘happens’ and the period? I just did it right there. I checked Twitter, retweeted a picture, and checked Facebook to catch up with a new follower. See? I’m guilty as charged. 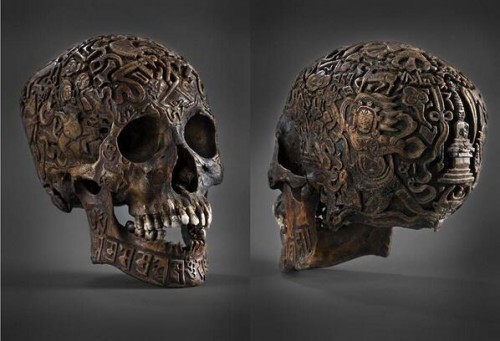 Tibetan skull carving. Too cool not to retweet. Go ahead. Buy me one for Christmas. It’s never too late.

Perhaps you begin to see where I’m going with this. I’m not bashing Twitter, Facebook, or any other social outlet. Far from it. I’m happy to have access to these amazing resources with which to harass my friends and frienemies, spread the word about my books, link to my blogs, and post ridiculous photos of skulls, swords, and whatever gruesome shots of myself the web will let me get away with.

It’s just that, even though we might think they are, these resources aren’t free. Not even close. If time is money (and it is, I promise you) I’m pretty sure I spend thousands of virtual dollars in web-marketing every year. For every hour I save by having access to a laptop, an iPad, and the internet, I’m willing to bet I lose nearly as much in creating a permanent web presence. I blog. I link to my blog. I post excerpts, cover art, and alternate cover art. I tweet, retweet, and  chat with other awesome artists. I edit my web stuff as much as I do my real work, and that’s because self-marketing in this day and age is real work. Anymore, it feels like writing books is the easy part. Much harder is being genuinely connected to the world around me. It’s something to consider. Don’t let the convenience of it all fool you. There’s just as much work to be done today as ever, if not more.

And so, if I dare reminisce, don’t kill me for it. I simply pine for a bit of face-to-face interaction. I crave the convenience of the web, but from time to time I’d like to converse with my contemporaries over a glass of bourbon, a smoking candle between us, and nary a piece of technology in the room. Collaboration used to mean sitting at a table with a pen, a few sheaves of paper, and an idea floating between us. Now it’s me and you and everyone else in the world simultaneously shattering the silence with our keystrokes. I don’t hate it. Au contraire. It’s intimidating, but it’s awesome. It’s antisocial, but not really. It’s all-immersive, all the time. It’s the world we live in.

And I’m just now learning to embrace it.

Author of every genre