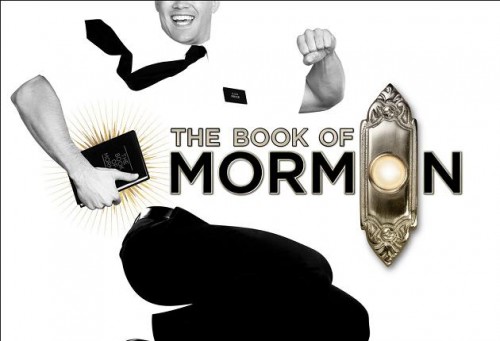 Before I get onto the subject at hand (the bravest and boldest thing I’ve ever done: praising the most-praised thing of the last decade), three quick bits:

1) I missed my last two posts due to the holidays, traveling, lack of wi-fi, and a harsh but luckily short head cold. Won’t happen again.

2) More importantly, I want to say congratulations to John McGuire for releasing his first novel, The Dark That Follows. I was one of the few that got to read the first draft, and I can’t wait to see what he’d done to it since. Pick it up and support the next square in this artistic quilt called Tessera we’re trying to sew.

Now that that’s over with, I move on to the point of this post:

I FINALLY GOT TO SEE THE BOOK OF MORMON THIS WEEKEND.

WARNING: We at Tessera have a No Religion / No Politics rule (which I endorse – I say enough biased and antagonizing shit in my own life), but, due to the nature of The Book of Mormon, the topic of religion will come up, but only in passing. However, if I say anything that I think anyone can at vaguely-kinda-at-all interpret as being maybe offensive to someone anywhere, I will write it in bold. Hopefully I won’t have to use that, but I figure it’s good to have it as a fail safe. Okay? Cool. Onto talking about the play…

So I don’t believe in God.

I state the above not to provoke, but because I think it’s pertinent when I talk about how much I love The Book of Mormon. Because, contrary to the opinions of a few, it is not an anti-religious work. Far from it, actually. It actually endorses having some sort of belief system, and a community based around it, to help you get through life. It’s primary thesis seems to be that while, yes, most religions look super-silly from an objective view, that doesn’t make them any less real to their practitioners, and it doesn’t mean they’re not an important part of the human condition. It is actually a plea for religious tolerance; the most Unitarian, “whatever gets you there gets you there” piece of popular art I have ever seen.

What The Book of Mormon is, though, is a searing screed against fundamentalism. It, not religion, is the true target of its derision and cutting humor (as well as a number of other topics).

But see, I’m just not non-religious. I am also largely anti-religious.

And again, I say that only to express that I should hate The Book of Mormon just based on its general conceit.

But it is impossible to do so. To hate The Book of Mormon. And not just because it is hilarious and smart, with curtain-to-curtain memorable songs and characters, and manages to be shockingly funny and genuinely moving…sometimes at the same time, but because it makes its case so well it almost wins me over to it. It makes me see the value of faith and religion. More than anything ever has, really. At the end of the play, for a few brief moments, I felt like a person of faith, moved by the words and sounds and ideas presented on stage.  I shrugged it off quickly, but still, for a man like me, that’s quite an accomplishment.

To those unfamiliar, The Book of Mormon is the multiple-Tony Award winning musical created by Trey Parker & Matt Stone (“South Park”) and Robert Lopez ( Avenue Q ). It opened on Broadway in 2011 to some of the best reviews in the history of theater and became an instant sensation. Tickets were both nearly impossible and impossibly expensive to get. The production I saw, at the Orpheum Theater in San Francisco, was part of its second U.S. tour. And it was still sold out, three years later, and the balcony seat I had was not cheap. This is a production that will be going on for a very long time. 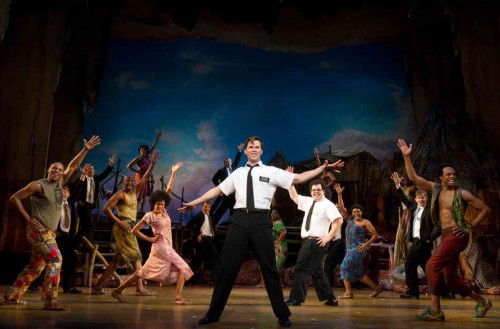 The play is the story of two young Mormon boys about to go out on their first mission. Elder Price is a superstar and is destined to change the world with the power of his faith, destined, he believes, to do “something incredible.” Elder Price is awesome. Just ask him.

Elder Cunningham, who Price is paired up with on their mission, is not awesome. Well, he is, really, but he’s not an awesome Mormon. In fact, he hasn’t even read the book. And he’s also a compulsive liar, prone to making things up and telling stories, most of them cribbing characters from things like Star Wars and Lord of the Rings. He is not a model Mormon; he is not a model anything.

The two men are sent to a village in Uganda to convert the Africans there to Mormonism. The place they arrive is in desolate shape: poor, hungry, ravaged by AIDS, and under the boot of a vicious local warlord obsessed with female circumcision. Elder Price, despite his iron clad faith and God-given ability, has a very hard time seeing how he can baptize these folks into the Church of Latter Day Saints. Drama, doubt, and disappointment ensue.

And also lots of singing and dancing and jokes and profanity and a hundred other things that will make you smile ear to ear.

That’s all I’m going to talk about the story. I knew most of it going in. Not from doing research, but from downloading the soundtrack from iTunes several years ago and listening to it constantly. I know every word of the soundtrack. Just the songs alone, without the benefit of the play, are still amazingly funny and tell a story. So, to be honest, I was already a fan of The Book of Mormon before I ever saw The Book of Mormon.

Obviously, this late into the show’s run, most of the original Broadway cast have moved on. The cast I saw was not the cast that originated the parts. But the players in the San Francisco production acquitted themselves fabulously (sorry. musical review. must use “fabulously” at least once). The Saturday night audience ate it up and I loved every second of it. One of the best musicals I have ever witnessed, maybe the best, my other favorite being Spring Awakening.

So, in other words, “thumbs up”. I’m SURE the folks from the play will be relieved to get my endorsement. It may be the thing they need to put them over the top.

But what I really want to talk about isn’t The Book of Mormon (“Could have fooled me, asshole!”) but how Book of Mormon made me feel afterwards. On the train back from the theater, I fell deeply into a state of joyful melancholy that I call the “Genius Hangover.”

It’s a feeling I have encountered many times.

Experiencing something so brilliant – a play, a movie, an art exhibit, a TV show, a video game, a concert, a public speech, anything – always leaves me with conflicting feelings. Firstly, I am elevated, inspired, and, well, fucking jazzed. I walk out punching the air, ready to go. Determined to run home and write. Juices flowing. Basking in the glory of art and what it can do and the limitless heights it can reach. You can’t wipe the smile off my face. I probably skip down the street. It is quite a high.

I mean, a HUMAN BEING made that. A human being like me–

But not like me. Uh-oh. This is where the second wave of emotions comes in to ruin the party, creeping up through the cracks in my joy and strangling it like weeds:

Because I will never make anything that good. Oh man. I just won’t. I mean, that is world-class. That is classic. It will be remembered for all time. It’s not that I just won’t make something like that, it’s that I can’t . The person or persons who made that are more talented than me. And that’s a hard pill of an egomaniacal narcissist (read: artist) like me. I know I’m talented. I think I’m very talented. 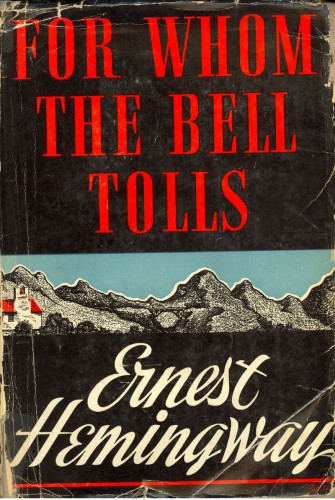 I’m not The Book of Mormon talented.

Weird, I know. But it happens every time. I’m used to it. I just embrace it, let it happen, and it passes and I move on.

It also lead me to another one of my philosophies of writing, which I think makes the second one I’m going to bore you with, the first being my Theory of 10%.

This philosophy can best be summed up thusly: Aim to Fall Short.

I know it doesn’t seem very motivating; it will never be featured on a kitten poster in your office.

Here’s the thing. I will never be my artistic heroes. That’s okay. Because my heroes are bad-ass and legendary. Nobody is them but them. I’m sure most days they weren’t even them. I’ll take two examples from my list above: For Whom the Bell Tolls and “West Wing”.

But every word I ever write is and will be a futile attempt to be.

I believe that you should strive to be as good as your idols. Look at them (artistically) as what you want to be and go for it. You will fail. Oh, you will fail. I’m never going to write like Ernest Hemmingway. Do you know how I know that? HE’S FUCKING ERNEST HEMMINGWAY. It’s as simple as that.

But what I think is this: of course you will fall short of your heroes. And when you do fall short, when you’ve maximized your talent and done your best, that is where you find your voice. You will discover the parts of your work that are innately you, the things that come out no matter how hard you’re trying to be someone else. You’ll learn your strengths and weaknesses and how to capitalize on both.

Every sentence I write, I want it to be a good as my favorite passage in all of literature:

“The world is a fine place and worth the fighting for and I hate very much to leave it.”

Not one of them ever has been. Again, HE’S FUCKING ERNEST HEMMINGWAY.

But in that failure, in those cracks, I find myself.

This concept may not work for everyone, but it works for me.

Anyway. Aim to fall short. That’s a piece of writing advice you didn’t ask for and probably shouldn’t heed.

So, to wrap it up: Sorry I missed some posts, Book of Mormon kicks ass, and I’ll never be Ernest Hemmingway. 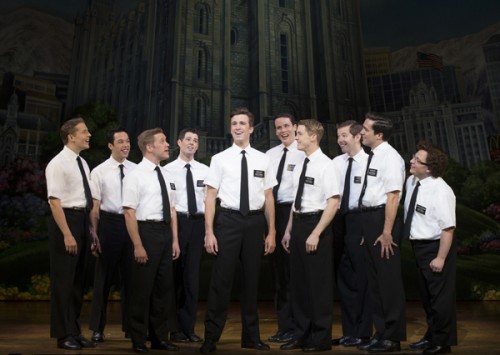 Over the next weeks I’ll be delivering my annual Best Films of the year list, as well as something on 21st Century Romance films (spurred by seeing Spike Jonez’s Her – talk about Genius Hangover), and maybe something about having fans or the closing of Blockbuster or what I made for dinner. I don’t know. Making this up as I go along.