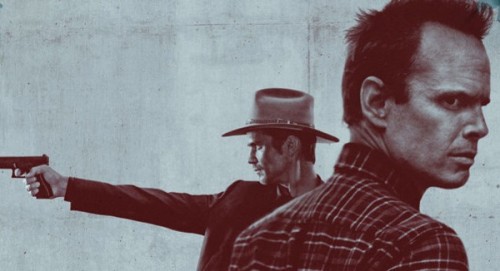 (note: This post lists many, many television shows. I am usually a stickler for punctuation and ideally each title would have quotation marks around it. But that would drive me insane and I’m not going to do it this time. I’m sure it will bother me way more than it bothers you. -chad)

The Sopranos started a revolution.

Breaking Bad was an incomparable example of quality, integrity, and sharp, bold storytelling.

Sherlock brought us both the Cumber and the Batch.

Game of Thrones leaves people who would never pick up a fantasy novel salivating every week for more sex, swords, and devastating character deaths.

True Detective was (is)… so mind-bendingly good I’m still not sure if it really happened or if it was a dream.

We all know it. Several have said it. It’s not the point of this post, but it’s important to say:

Over the last decade plus, television has surpassed film in both cultural relevance and quality.

Most of these shows air or aired on cable, basic and premium, but not all. We are, if you can look past the pile of shit that is reality TV, past the umpteen-million Star Search clones that clog the networks every year, in a Golden Age of TV. An age that could never have been foreseen by Philo Farnsworth and his brother-in-law Cliff (that’s for the Sports Night fans out there – “I can make glass tubes.”)

Tonight, one of my all-time favorite shows is having its fifth season finale. Next season will be its last. It doesn’t get a lot of press or awards (it has won a few) and its final episode won’t generate anything close to the hype surrounding the last stand of Walter White. 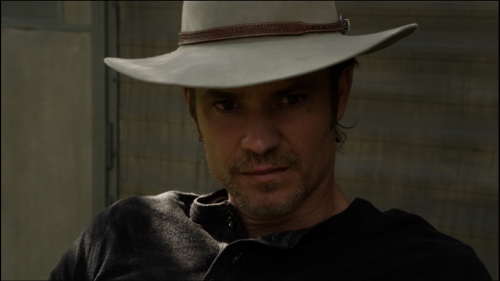 But Justified is my favorite show on television.

I admit it’s not the best show, but it’s definitely my favorite.

Because Justified is the Reese’s Peanut Butter Cup of cable TV.

And I love me some peanut butter cups.

In order to explain that (the metaphor, not my love for the candy), I have to briefly mention two amazing shows that I purposely left off the above list. 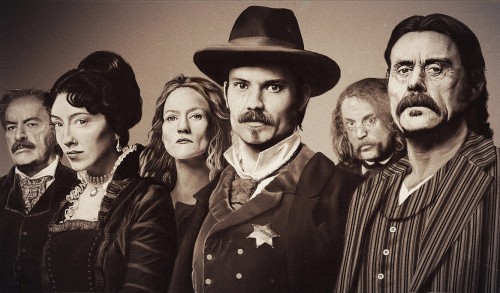 Deadwood. This HBO show had a lot of things that made it difficult to find an audience: it was a western, it deliberately paced, sometimes complicated, and written by David Chase with an almost Shakespearean style of dialogue that was at times impenetrable. I fucking loved it.

It was great to have a full-on, serious Western on TV. A dirty, violent, sometimes sexy, somewhat-based in history, western in which the great Ian McShane claimed the word “cocksucker” as his and his alone for all time.

In ran for three season and ended in a less-than-satisfying way, because they were not 100% aware they were making a series finale when making the season 3 season finale. When it ended, we were promised a TV movie or two to wrap things but, but they never materialized.

Deadwood was so good, but I have never revisited it. Because I know it doesn’t pay off. I know I won’t get any more satisfaction getting to the end than I did the last time. It’s a real shame.

One of the stars of Deadwood was an actor I had already been a fan of for years, ever since his turn as the “good” drug dealer in Doug Liman’s Go. The character he played was real-life Deadwood lawman Seth Bullock.

The actor’s name is Timothy Olyphant. 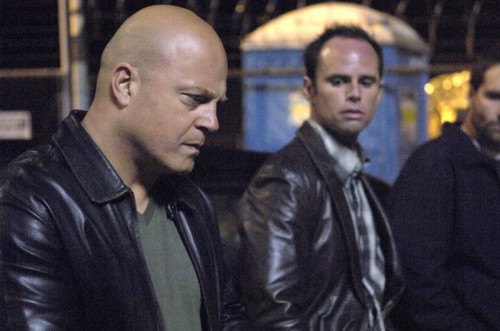 The Shield. Due to the well-deserved supremacy of The Wire and The Sopranos, the other great crime/cop show of the last decade has been largely forgotten. But The Shield was grade-A amazing damn television. Michael Chiklis’s Vic Mackey was Walter White before Walter White. As a crooked cop who always ended up doing the wrong thing even when trying to do the right thing, he didn’t break bad: he broke worse. And worse. And worse.

It was a boundary pushing show. Taking a cue, I think, from NYPD Blue, it tested the limits of what you could say or do on (cable) television. Watching the pilot, I couldn’t believe the language they were using, even so far as talking about a guy’s “cock”. (And yet, they still never said “fuck”. Censors are weird.) The violence, the all-around moral bankruptcy, it was astounding.

The Shield also aired the most single harrowing scene I have ever watched on television. If you haven’t seen the show I won’t give it away, but, near the end of its run, it does something that is so heartbreaking, so unexpected, and so utterly painful to watch that it kept me up at night. Fuck the Red Wedding. Fuck Buffy’s mom dying. This moment… oh man I wish I could get into it but it would take so much setup… just thinking about it hurts me deep.

The Shield was a hit, especially for FX, and lasted 7 seasons. The finale was quite good.

One of the stars of that show was an actor I had never seen before. He played Shane, a cop that teeters over the edge and becomes a monster that even his mentor, Vic, a monster himself, can’t control. He is the center piece, actually, of that harrowing scene I mentioned above. You may have seen him in the last few years in films like Lincoln, Cowboys & Aliens, and Django Unchained.

His name is Walton Goggins.

Two years after the end of The Shield, Justified debuted on FX. Centered around two Elmore Leonard characters -Raylan Givens, a deputy US Marshall forced to go home to Kentucky where he grew up, and Boyd Crowder, a white supremacist, arsonist, criminal hillbilly scumbag- it is a crime show with a western feel to it.

Who play these two men? 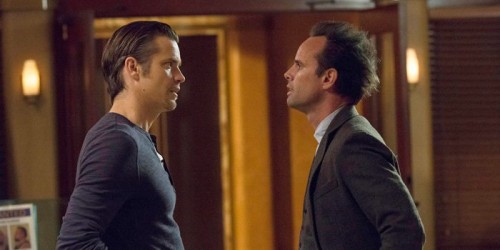 I was hooked before the pilot even aired. 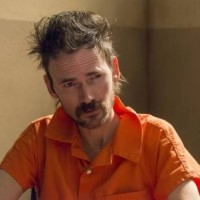 I could go on and on about the great qualities of Justified but if you haven’t seen it, I want you to experience it yourself. The dialogue is razor-sharp, very much in the vein of Elmore Leonard’s style. In fact, before he passed he said it was his favorite adaptation of his work. The story lines, while not groundbreaking, entertaining as hell and always pay off in satisfying ways. The show runner, Graham Yost, also has an unbelievable eye for guest stars, for bringing in faces you recognize but never feel like they’re stunt casting. Margo Martindale (who won an Emmy for her role). Jeremy Davies. Jere Burns. Mykelti Williamson. Neal McDonough. Patton Oswalt. And, this season, Alicia Witt, Amy Smart, and Michael Rapaport, turning in his best performance since Dick Richie.

But, really, the number one reason to watch Justified is that it’s fucking cool.

Goggins as Boyd is just fucking cool (in a scary way sometimes but still).

The rest of the supporting cast is fucking cool (especially the great Nick Searcy as Raylan’s put-upon boss).

But they’re more than just cool. The dynamic between Raylan and Boyd is a lot like Alan Moore’s vision of the Joker/Batman relationship (nerd alert!). Or, okay. Both their fathers were criminals. Let’s say, instead, that they were alcoholics. Now. Most children of alcoholics (and other addicts) that I have known go one of two ways. They either eschew the fire water entirely, doing whatever they can to not turn out like their parent, or they fall the same way, losing to the genes that carried down the terrible disease.

Raylan is a man determined to not be like his father. Boyd, on the other hand, has chosen to continue the family legacy. But neither are that far from the other. They both walk a very delicate line and that balancing act is the heart of the show. A good man who sometimes finds himself doing bad things and a bad man who I think sees himself as righteous, even though deep down he knows he’s damned.

Have I mentioned I love this show? 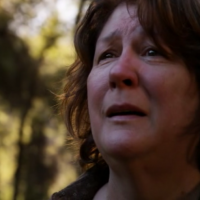 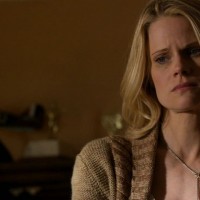 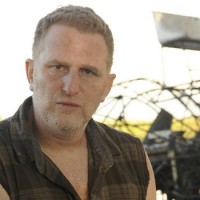 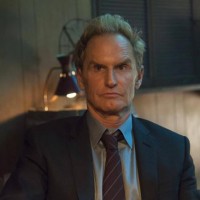 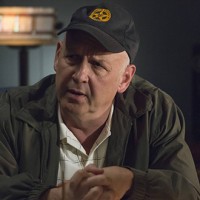 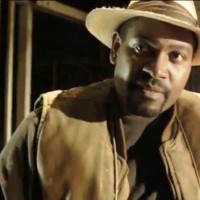 When they announced Justified would be ending after season 6, I was at first sad because I don’t want to see it go, but then was grateful. Because I still enjoy tuning in every week. It’s the first thing in my Tuesday DVR recordings that I go to. And if it can go out providing the same amount of entertainment, without collapsing like The Office or Six Feet Under or, let’s face it, most shows, then I’m all for it ending.

So I guess this has just been a plea for folks to watch my favorite show. I’m sure I haven’t done a great job selling it, but trying to sum up 5 years of a show without spoiling stuff and trying to keep my word count down is nearly impossible. I would rather the uninitiated see for themselves.

I know Game of Thrones just got back. I’m stoked too. And Silicon Valley looks very promising. Veep is great. And Hannibal? Hannibal is about to get real damn interesting. But, after sweeps, after the season is over, if you haven’t watched or caught up on Justified, I cannot recommend it enough. There’s plenty of time to get through the first five seasons before the final one airs next year.

Enjoy this Golden Age. A time when television has never been better. When television is, and I’m speaking as a film nut, a more satisfying experience than nearly any film that hits cinemas. It may not last forever. Hollywood has a habit of fucking up good things (see the indie film boom of the early 90s).

Like I seem to be doing lately, I leave you with a song. “You’ll Never Leave Harlan Alive” is not the theme song to the show, but it is its soul and they often use it to end their seasons. It’s been recorded by many, but here is Brad Paisley’s version, the version I heard first. Not normally my kind of music, but it sums up the spirit of the show more than any words I can conjure.