On an otherwise quiet afternoon, while fishing in a blue lake beneath the summer sun, we caught a fish.

Only this was no ordinary fish.

This was Leanne Davis, author of The Sister Series and The Seaclusion Series, both of which are huge.

And this is no fish story. If you like to read, and you want to catch some top-notch fiction, just go right here.

But first…read our exclusive interview with Leanne!

So…Leanne…you’re kind of a big deal. (No blushing allowed.) Let’s talk about your uber-successful The Sister Series. Give us the goods on what it’s about and why you decided to write it:

… So kind of you to say so… but I’m very small fish in the big pond of authors on Amazon. But it has allowed me the privilege to write full time for a living, and I am SO grateful for the opportunity.
Anyway, The Sister Series is (so far) a seven book series that will be ten books when I’m done with it.
This series came about when I had just finished writing my Zenith Trilogy which chronicled a rock band living in downtown Seattle. I had already written my Seaclusion Series which is about a handful of families in the small town of Seaclusion. I wanted something different. And I found it. I had this idea of a soldier and girl… but it didn’t go exactly as I first planned. It became a much involved story than I first intended. The beginning of this book has Jessie Bains kidnapped and being held prisoner in Mexico. Though the time spent there is short; the shock of what happens to her follows her through the rest of her life. She suffers from PTSD, something that I show her dealing with through several books and it spills around to those she loves. The premise of this book and series came about when I happened onto the subject of drug trafficking at the United States border which led me to Mexico, and eventually to how prevalent sex trafficking is, and how it has become tied into the drug cartels. From this research I started to design the overlying theme of this series. The concept for Jessie’s kidnapping was inspired by some of the stories I found and as horrifying as my fiction is, the real stuff is literally sickening. The rest of the series has grown into different relationships and storylines, but the starting book set the tone for the series as my most serious, dark and emotional.
The Sister Series is about the emotional scars and battles that are often hidden in people.
Rape. Drugs. Abuse. Violence. Pain. Betrayal.
And how they can be overcome.
Love. Joy. Family. Forgiveness. Faith. Hope. Redemption.

The overlying arc of this series is exploring the lives, loves and familial connection of two sets of sisters and their daughters. Each book is a separate story but related to the other books. The series focuses on these women’s trials, tribulations, dreams and their individual quest for acceptance, love and happiness.

You’ve cracked the top of the charts with several of your books. First of all, congrats! Second, wanna share your marketing strategy with the aspiring masses?

Thank you! I’ve had the privilege of some really amazing days in the trenches of Amazon. It’s not often or for long, so when it happens, you will find me taking lots of screenshots of my books as if it’s my child at their first day of school!
My strategy… luck? Seriously, I think a lot of it was due to luck and being in the right place at the right time. When I released The Other Sister it was often picked up as a ‘dark romance’ through Goodreads and when free in the Amazon store. Dark romances, a few years ago, was a relatively new concept of these really intense, almost sadistic romances. My book is not actually dark like that, but the premise sounded like it, so it helped propel interest to it that led to a lot of downloads. From these downloads the book garnered quite a few reviews. It was because of these reviews I was able to use marketing services such as BookBub to run book ads. The large number of downloads from the exposures from these outlets introduced my writing to most of the core readers who follow my books.
When I was picked up by my publisher (The Wild Rose Press) they sent me this list of fifty ways to market as an author. The number one marketing tool was to: write another book. I took that one to heart. I’m much more apt to be found writing another novel than marketing on twitter, Facebook or even blog interviews (look at me doing it now!). I decided that I could do: I can write a lot of books. At any given time I have up to ten novels I want to write. My ideas and characters and desire to write them down is only limited by my physical time to write and edit them! So that is probably my number one marketing strategy, write, write and write some more.

What kind of stories inspired you to write The Sister Series and The Seaclusion Series?

Often news stories. Which isn’t the typical ‘romance’ inspiration. It’s not the facts that inspire me but it’s pondering what the emotions behind a certain event or experience would make someone feel and the affect it might have on the rest of their lives and relationships. That’s usually where my stories pick up… with my characters dealing with some underlying issue. I like to write about difficult subject matters, I especially like to explore unlikely personality matches or situations and see if I can’t twist the story around to end happily. I take on a lot of untraditional characters for romance heroes and heroines. I’ve written about a drug dealer, several PTSD survivors who aren’t coping well, alcoholics, and even cheaters, just to name a few. I really hate stereotypes so I enjoy seeing if I can’t go against them.

What do you find most challenging about being a modern-day writer?

Time. Exposure. Piracy. Reviews. Sales. The list goes on!
I also think social media, binge watching TV shows and movies… you know everything electronic, distracts potential readers and are our biggest competitors.  I think we authors compete more with other forms of entertainment than we do each other. Many blame the “glut” of new authors and novels as the challenge—as if a flood of books is a bad thing—when I believe it’s merely less readers reading.
The other challenge, as with most authors, is getting “found” on the behemoth Achilles Heel of all authors: Amazon.
The catch-22 of Amazon. I sincerely love Amazon in so many ways. I would not have a career without it, let alone the sales I’ve had or even begin to sustain it. Amazon allows me to publish what I want, when I want to, how I want to and also have the potential of readers.
The catch being, I don’t control it. Why are some books successful? Others release to crickets. I’ve had both. I didn’t do anything different marketing-wise. So if I could find the seemingly mythical formula, I would be a rich author. But in this access to readers, I also hand over all my exposure to Amazon and only Amazon. All my eggs are literally in their basket. They have a lot of control over my career and that is never a smart long term business plan… but at this point there is no better one to have. So… huge catch-22.

Looks like you’ve got a book coming out pretty much now. 🙂 It’s called The Broken Sister. What’s it about and when can readers grab their copy?

The release date was June 20th to Kindle! It is the seventh book in the Sister Series and takes on the daughter of the main character from The Wrong Sister (4th book in the Sister Series).  This book deals with a twenty-year-old college junior being drugged and date raped. She doesn’t remember it, so she doesn’t know what to do in the aftermath of it. As an added twist to this story, her love interest is the brother of her rapist, and she just doesn’t know it… yet. 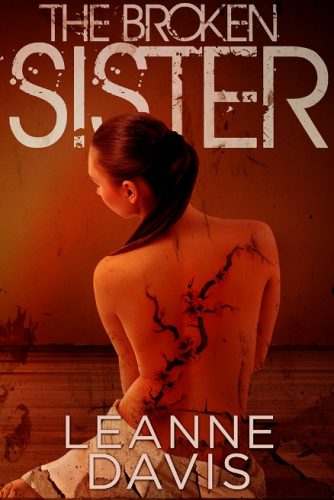 To be more official, here is the blurb:

Something happened to Kylie McKinley during her freshman year in college. Something no one knows about. The thing is: she can’t remember it fully, so what could she possibly have to say about it? Why, then, does it keep screwing with her head so much? When another, far braver girl than she comes forward with a story that is eerily similar to Kylie’s own, she begins to see she can’t keep silent forever. Bolstered by this girl, Kylie finally finds the necessary strength after two years of indecision to do something about it. But will it be enough to finally end the silence that has almost broken her?

Then she realizes exactly whom her accusations will pit her against.

Tristan Tamasy has long term plans to be the next head of the Tamasy legacy. Tristan is smart, focused, cultured, and ready to expand their family’s corporation. Tristan is nothing like his younger brother, whose antics have lately started disrupting everything. Now, Tristan has been commissioned for damage control after two girls start making noise against his brother. That’s when he meets Kylie McKinley. From the start, she challenges the road he has chosen for his life. After he starts to realize she might be telling the truth about his brother, his integrity to do what is right conflicts with his loyalty to the family he’s been groomed to protect. It tests everything he believes about himself and threatens to squelch the feelings he has for the one woman he should never want.

Again, thank you for hosting me here today!   (We were happy to have you!)

Enjoy this interview? Be sure to check out ALL of Tessera Guild’s best creative sit-downs right here.