Want to put collectible card game (CCG) designer on your resume? This is for you and you alone.

Circles of Imora – The Beginning

Circles of Imora by Dominik Hanisch
Kickstarter campaign ends on Saturday February 18th, 2017 at 4:59 AM EST.

“Get one of the first 100 copies of Circles of Imora and become a member of the development board. COI is a brand new Card Game.

Circles of Imora ® is an action packed, brand new and easy to learn Card Game and comes in a full playable deck with 100 cards. Construct an army for survival on Imora, then expand your Deck with further expensionDecks to come.

If you want to become a part of the final development and an important step to grow the community – then back us! We need you to achieve something big.

– Edition available in English and German.

Circles of Imora ® is designed for 2 players (Age 13 and above), competting with their individually assembled armies. Each player is allowed to expand its deck up to 60 cards.

The game consists of successive, dependent fights. Each fight will take place in one of the 4 available skills. Additional bonus features can affect the game before, during or after a fight positively or negatively.

At the beginning of the game each player has 20 life points. After all the cards are played the final score decides who has won. If a player previously falls on 0 points he has lost the game immediately.

– the package contains 100 cards of the nations and territories of Imora as well as special cards to strengthen/ to defend your army during your fight. 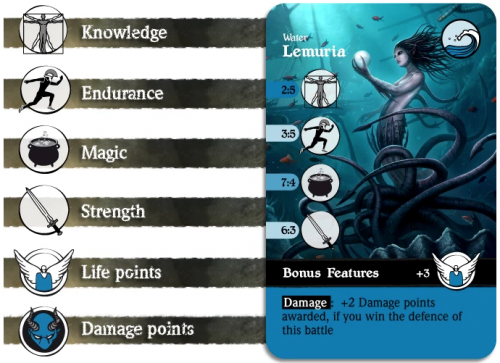 We’ve been working for over two years to invent, create, develop, design and test the game. Now we’re ready to complete the developing process and it comes down to licence the illustrations, build the community and doing the fine adjusting in the gameplay.

Your chance as part of the final development-Team:

We wanted to put this project on Kickstarter because it’s the fastest way for us to get the game into the your hands and build a community – with your help! We think this game is great and we need you for the fine tuning, for the final development to bring it to the market. So, if a world full of epic battles, is a world you want to be part of then please back this project.

The Circles of Imora Team (Will and Dominik)”

This project is not for the casual fans, it’s for the super fan that wants to leave their mark on the CCG industry. Literally, you either make a pledge without a reward or you add “The Developer” pledge and you help create the game. This is the future of crowd-anything. Crowdfund + Crowdsource! Take my money and my ideas!

Their Vanity Press Reward (this their only reward level):

Become one of our developers and influencer for Circles of Imora – The Beginning. Your inputs, ideas and actions to improve the game regarding functionality, balance and fun are highly appreciated.

If any project was created with me in mind, this is it. My blog is about buying vanity press RPG writing rewards from Kickstarter to build a resume. I’m doing this to move from wanna-lancer to freelancer. This is the first project I’ve encountered where the *ONLY* option is to be a developer. You sign up and you’re making the game.

This project is not RPG, it’s CCG but it speaks to me in so many ways! If I pledge, I get to write for it and it will expand my presence in the wider gaming world.