It was only a matter of time.

There’s something I’ve been dying to admit. That I’ve held out this long is surprising. I know I’ve written about inspiration before, about all the movies and books and pieces of art that’ve blown my mind and lit bonfires beneath my imagination. I’m sure I’ve even touched on all my little childhood adventures in the spooky cornfields behind my grandparents’ house, my epic all-night Halloweens, and the time my uncle dropped all his old Dungeons and Dragons books in my lap and said, “These are for you.”

Remember this guy? Yeah, me too.

Yes, it’s true. There’s another medium that shaped me into my special blend of eccentric, obnoxious, and extroverted.  Games. Not board games (though those were certainly involved). Video games. I’m not talking about Xboxes and Playstations, Gamecubes and Segas. I’m talking old school, right after Pong and Asteroids, right in middle of the primordial soup that was the Atari 2800, the original NES, the first Texas Instruments keyboard game system, and yes, even that bastion of awesomeness, the Intellivision.

Who here remembers the Intellivision? I’m guessing 10%, and maybe not even that many of you. That’s ok. Doesn’t matter.  The Intellivision, bless its soul, arrived in my realm of awareness just days after my tenth birthday. My auntie sat me down in front of an ancient black and white tv, handed me a strange-looking and awkward-to-hold controller and said, “This is for you.” And my life forever changed.

Looks lame, right? But this little thing made for a whole new experience.

Oh, but that was a beautiful day. I mean; I’d already memorized all my Dungeons and Dragons books, read House of the Baskervilles ten trillion times, and used a plastic He-Man sword to wage endless war against the invisible hordes in the backyard at dusk, but this game system was something different. My imagination soared. “Are you sure?” I asked my auntie. “Yes,” she told me. “You can play until bedtime. No longer than that.”

And so, for the next four-hundred thousand hours, I tumbled into this new medium. For me, video games were never just games. They were a way for me to pretend I was a part of the story, that the hero’s sword was in my hands, the villains’ wicked powers at my beck and call, and whole armies mine to move. On the Intellivision, I played epic titles such as Treasure of Tarmin, Utopia, and Advanced Dungeons and Dragons. And later, when the NES rolled up in my face, I lived and died playing the original Zelda, Metroid, Kid Icarus, and pretty much every other game with a fantasy or sci-fi twist. It didn’t stop when I put the controller down. I daydreamed so deeply it fundamentally altered who I was. I made up epic stories in my mind about my roles in each game. I acted as though I was the lead character…and the main villain. At school, I’d draw myself battling the dragons in the games. And when auntie or anyone dared tell me to put the games down, I’d go to bed dreaming of fighting the monster…or of being the monster. 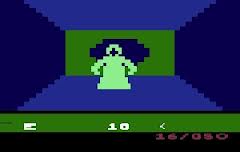 This guy right here. I hated this guy. He kicked my ass and stole ALL my lunch money.

The obsession continued well into my teens. I still read my books, played football with my friends, socialized, pined hopelessly after girls, et cetera. But back then, before I discovered the art of writing, I’d spent my nights with the games. I’d crawl into bed, turn out all the lights, and become Link, Samus, Icarus, the guy from Dragon Warrior, or any of the faceless dudes video games of the 80’s refused to name. I didn’t play just to win. I played for the sake of playing. Things like the eerie music in Metroid and the epic scope of Zelda set the atmosphere for countless dreams…and unbeknownst to me, laid the foundational stones for my entire style of artistic expression. While other kids were bragging about beating Street Fighter or walking through all the bosses in Zelda without once dying, I was storyboarding for the future without even knowing it. Who knew it could happen? Definitely not I.

So yeah, there’s a tiny window into my soul. Video games have come a long, long way since those beloved nights. Even though it’s true I love my Skyrim, my Halo, my Civilization, my Twilight Princess, Metroid Prime, and my Doom, the oldest games remain closest to my heart. If ever I’m writing fantasy, maybe my forests look a little bit like Hyrule’s. Whenever I’m dreaming up a new deep space horror story, the dark mood of Metroid will splash a bit of black paint onto my mind’s canvas. Even blogging about it gives me ideas, some of which I’ll jot down tonight…and finish twenty years from now.

Maybe there’re a few others out there who are affected the same as I. If so, please drop by in the comments section. I’d love to hear your stories.