Disclaimer: This review is largely spoiler-free

This week’s movie, Whiplash, breaks only a few bones, but is almost as loud, and is definitely as good.

I’ll start with an admission: I’m late to the party. Very late. 2014’s Whiplash, directed by Damien Chazelle, has already earned three Oscar wins and numerous other accolades. That said, it’s my opinion that not enough people have been exposed to it. So if this review convinces even one person to check Whiplash out, I’ll claim success.

Early on, we see a different J.K. Simmons than we’re used to. Gone is the friendly guy from the Farmers Insurance commercials. Gone is the affable, calm dude from J.K.’s previous films. Instead we get a badass. And I’m serious. As Fletcher, the leanest, meanest jazz instructor ever, J.K. is shredded. He’s an all-black-wearing, door-slamming, fist-shaking maniac. He’s a force of f’ing nature.

And it’s apparent he’s made it his mission in life to mold Andrew (played to perfection by young and talented Miles Teller) into the planet’s best drummer…or kill him in the process. 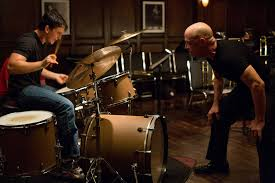 As an interesting aside, it should be noted that Miles Teller played ALL his drum pieces. He had a head start, being born of a musical family, but even so. His dedication to learning some of Whiplash’s more extreme rhythms is admirable, and adds tons to the movie’s realism.

So what’s it really about?

Whiplash is primarily a struggle between two men. Fletcher’s win-at-all-costs mentality are at permanent odds with Andrew. Fletcher wants perfection, nothing less, from his musicians. And perhaps no instrument requires perfection more than drums. Andrew’s willing to bleed to become the best, but still manages to be overwhelmed by Fletcher’s never-ending stream of F bombs and insults. As the movie drums on, literally, the questions become: “Is greatness only achievable under enormous pressure?” and “Is there a such thing as going too far to win?” I know what MY answer is. If you watch or have already watched Whiplash, I want to know YOURS. Because therein lies Whiplash’s soul. It’s Pain versus Reward. Sacrifice versus Greatness. Living a full life versus Having a Singular Dedication. The movie puts us in the proxy position of asking how far we’d go to be the best at something.

Would you bleed? Would you suffer? Would you give up every comfort? Most of us wouldn’t. But perhaps Andrew might.

The supporting cast is small, but more than capable. Veteran Paul Reiser plays Andrew’s concerned but ultimately powerless father. Beautiful Melissa Benoist charms as Andrew’s unfortunate love interest, Nicole. Austin Stowell and Nate Lang are formidable rivals in the studio for Andrew to wage war against. They’re all very good, but reduced to mere pawns in the Fletcher v Andrew struggle. And that’s ok. This isn’t their film. It’s J.K.’s and Miles’.

As another aside, if you like drums of any kind, you’ll love Whiplash’s talent, if nothing else. The speed and excellence demanded in the film transcend genres. It’s obvious this isn’t a movie about jazz at all. It’s about power, skill, and using means to justify the ends. But even if you don’t care about all of that, the drums…are…epic.

Let’s be clear. I Redboxed Whiplash on a hunch. I’d never heard of it prior to plugging it into my DVD player, and I’d no idea what to expect.

…which made it all the better when it turned out to be fucking awesome.

Rent it. Watch it. In the dark. Preferably alone.

And when you’re done, check out my latest philosophy title here.