I’ll let you decide which of these are sarcastic…

…and which are deadly serious.

I will never willingly let Halloween pass without carving a jack-o-lantern.

Definitely won’t ever put a politician’s sticker on my car. (or some stupid, ignorant slogan.)

Nope. I’ll never enjoy using my cell phone. For anything. Ever.

Can’t ever see myself saying I ‘believe’ in something. I’ll either know the answer…or more likely I won’t.

Or probably anything ending in -ist. (except for maybe a starving artist.)

I will never, ever be able to dunk a basketball. 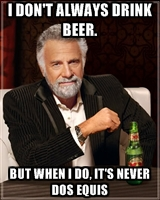 Can’t imagine I’d ever purposely let anyone else win. At anything. Even my son.

Not ever gonna be a fan of country music. Or K pop. Or love songs.

Won’t ever, ever root for the St. Louis Cardinals, the Packers, or the Pistons. No matter what.

Or post a bathroom selfie. (Unless she asks for one.)

Never gonna stop hitting on cute waitresses. (Or at least asking them if they read and want to buy my books.)

Won’t ever own a pit bull. Or a ‘rottie’. Or any dog big enough to eat me.

Won’t ever take a definable position on a political hot topic. Especially immigration. And gun control.

Or put water in my scotch.

I’ll never successfully date a woman who doesn’t like death metal. Or at least who can’t name one Slayer song.

No tattoos of names. Or any words, for that matter.

Won’t ever be able to sleep without a fan blowing.

Never gonna leave a restaurant without tipping my server. Even if they sucked.

Not ever going vegan. But won’t ever make fun of people who do.

Won’t ever kill a bee. Or an ant. Or even a wasp if it’s outdoors. (But houseflies and black widow spiders, you guys are fucked.)

Probably not gonna reach my goal of being 6′ 4″.

Never going to meet a margarita I won’t like.

Or underestimate a poor one.

I won’t ever enjoy a compliment. Nor be affected by a cutdown.

But more than anything else, I’ll never quit making art. Or writing books. Or putting stuff on the internet to make people say, ‘Hmmmmmm…’

A while back I wrote about my likeness to Jon Snow (i.e.; not knowing anything.) Check it out here.

Otherwise, creep yourself out with this.